Nuclear power stations bring to mind vast installations costing tens of billions of pounds to build. But what if they were small enough to be manufactured and financed like other systems?

In a talk at the Oxford Martin School on November 14 Professor Steve Cowley outlined his vision for electrical power generation based in part on small modular nuclear reactors. His underlying argument is that future power generation must have a significant proportion of base load, that is non-intermittent generators.

The need for this was illustrated by F. Wagner’s study of renewable energy generation in Germany in 2012, which concluded that if Germany’s average power was provided by wind and photovoltaics, then it would be necessary to have a further 89 per cent of that power as back-up, ready to fill in the gaps when the renewables were not producing.

This of course ignores storage. Batteries may be part of the solution, but even with costs dropping sharply they will still be unreasonably expensive for filling gaps of more than a day or two. The same study found periods up to 12 days where storage was needed.

To handle this problem the UK government has since 2011 considered three scenarios for electricity generation: high renewables, with problems of industrialising both landscape and seascape; high carbon capture and storage (CCS), mainly for industry, but which is expensive and on which little progress has been made; and high nuclear. The plot below shows the scenarios for the fifth carbon budget, which ends in 2032. In all cases natural gas provides 26 per cent of the base load. 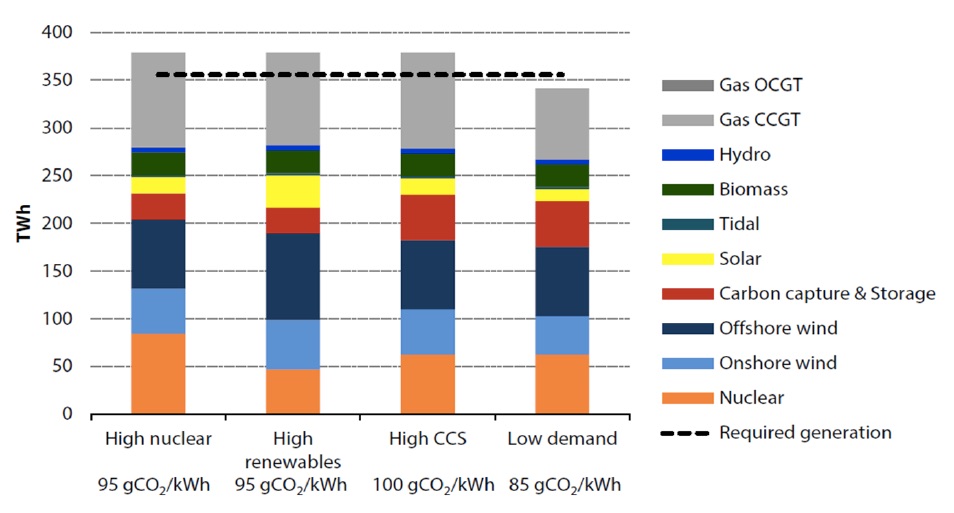 Electricity production scenarios for the UK’s Fifth Carbon Budget, set in 2015 for the period 2028-32. The plot shows the energy per year in terawatt-hours (TWh).

The problem with the nuclear option is that, although current output is around 72 TWh per year, most of the UK’s nuclear power stations will be closed by 2025. The only current planned addition is Hinkley Point C, which could produce 25 TWh per year. There are doubts over whether this project is financially viable and will even be completed, since at the agreed strike price of £92.5 per MWh annual revenue will be £2.3 billion whereas construction costs alone are over £20 billion.

Small modular reactors (SMRs) may be the solution. A consortium lead by Rolls Royce is developing, among others, a version in which the reactor is small enough to be transported by road, would occupy one-tenth of the area of a standard nuclear power station and could produce 1.7TWh per year. About 35 would be needed, in addition to Hinkley Point, to satisfy the high nuclear scenario.

SMR developers say that they are less complex and are therefore cheaper and take less time to build and install. Large nuclear power stations are nearly always one of a kind so that new licences and safety tests must be drawn up for each one and there are no manufacturing efficiency gains. Only in the 1980s in France were sufficient numbers produced to make them profitable, although South Korea is currently producing nuclear power at a competitive £60 per MWh.

Rolls Royce says that, providing it gets government backing, it could have one up and running by 2028, with actual construction only taking five years. It will last 60 years, compared with the 40 to 50 years for large reactors. After entering volume production the target price will be £60 per MWh. 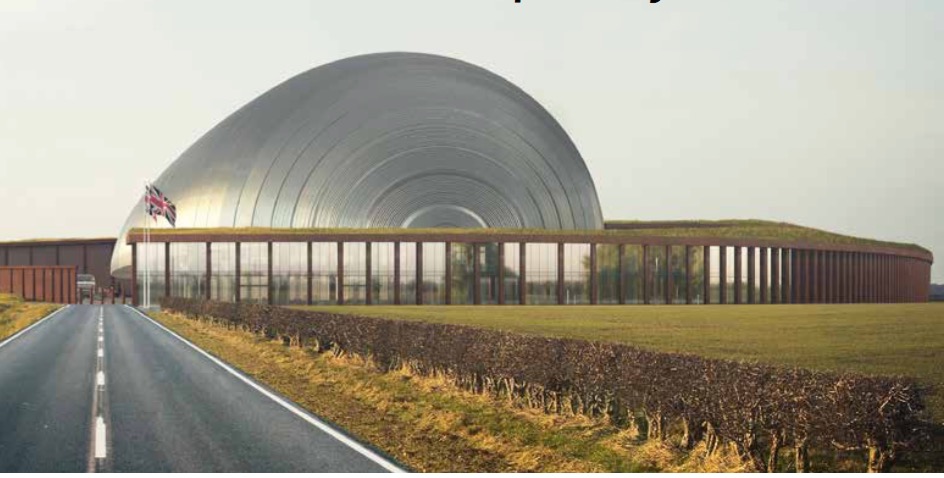 In principle SMRs are safer than large reactors because for a given volume of radioactive material they have a larger surface area on which to place protective elements. Distributing power around the country should also be safer than a few sites when facing against an enemy bombing attack. However it may be harder to guarantee security against terrorist type attacks for many small sites than for a few large ones. The problem of disposal of nuclear waste remains. (The safer, but so far unproved, thorium reactors were not discussed.)

In 2015 the UK government was much taken by SMRs, putting aside funds in the budget for research and development and later announcing a competition between vendors. These were submitted in 2016 but the response has been slow. The Department for Business said in September that “we hope to be in a position to close the existing SMR competition shortly”.

Professor Cowley is also concerned about the long term, in particular that there is only enough uranium for 100 years. He sees all current solutions – wind, solar, nuclear fission – as transitional, and that in the second half of the century we will move to nuclear fusion. Fusion has been achieved at the Culham Centre for Fusion Energy and elsewhere, but currently takes in 50 per cent more energy than it puts out. The international ITER project in southern France is set to address these problems and is expected to start experiments in 2025.