Large scale Carbon Capture and Storage in the UK

Carbon Capture Use and Storage (CCUS) has had a rocky history in the UK. Ten years ago the coalition government offered to provide £1bn to support the winner of a competition between two proposed projects, but this was later cancelled. The Energy White Paper of December 2020 then committed to spend £1bn by 2025. Where do we stand two years later?

On the positive side, CCUS exists and is in operation. For example, the company Carbon Clean, headquartered in London but with offices in India, Spain and the USA, offers completed systems or tailored designs to capture CO2 using the standard chemical methods (Greenbarrel, Oct 2021). As of October 2022, it claims to have removed over 1.7 million metric tonnes of carbon from 49 facilities world-wide (to put in context, total annual world-wide emissions now run at 38,000 million). However, the CO2 is either being used or stored in small volumes. For example, some large industrial plants were emitting CO2 from their on-site power plants but buying it in for use in their industrial processes. The benefit of CCUS was obvious. CCUS technology works, so the main problem is how to store the captured CO2 on a large scale.

Earlier this year the DBEIS published the results from seven large scale projects that it had helped fund. These are so far just studies, or Key Knowledge Deliverables (KKDs) as it likes to call them. They were published partly because of international agreements to share new knowledge about CCUS. Three were focussed on new technology that could reduce the cost or improve the efficiency of capturing CO2, while four focussed on implementation in different regions: Acorn in north east Aberdeenshire, Hynet in north west England, Drax’s bioenergy with CCS project, and the East Coast Cluster (which is a joint venture between Net Zero Teeside and Zero Carbon Humber).

Acorn is an association of Storegga, a private UK company focused on clean technologies, and three oil and gas companies: Shell, Harbour Energy and North Sea Midstream Partners. The CO2 will come from existing nearby power plants and from blue hydrogen plants[1], and will be stored in depleted gas reservoirs off Aberdeenshire, or shipped elsewhere.

Hynet is focused on future blue hydrogen plants with storage in the depleted gas fields of Liverpool Bay. 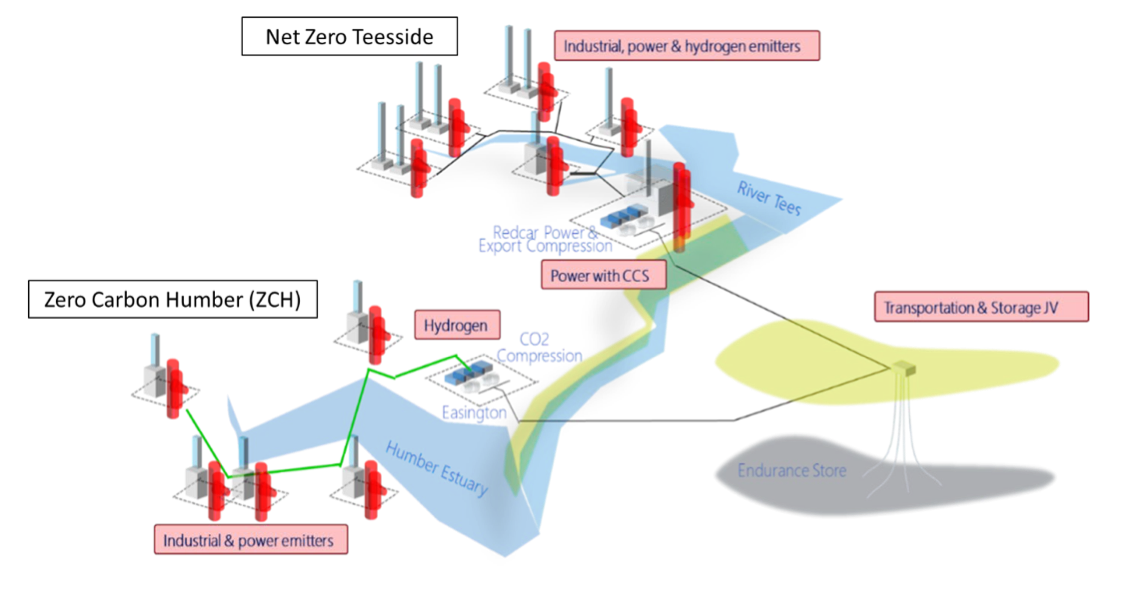 Overview of the East Coast Cluster and the Northern Endurance Partnership project (https://www.gov.uk/government/publications/carbon-capture-usage-and-storage-ccus-innovation-nepnzt-key-knowledge-deliverables)

Drax and the East Coast Cluster will both store the captured CO2 in Endurance, a North Sea saline water reservoir 144kms from Teeside and 82 kms from the Humber estuary[2]. Of all the projects the East Coast Cluster is by far the largest with CO2 being produced by the substantial industrial clusters on Teeside and the Humber, along with their associated power stations and future blue hydrogen plants. Transport and storage is being managed by the Northern Endurance Partnership which is led by BP with Equinor, National Grid, Shell and Total as partners. Oil and gas companies have a clear interest in facilitating the continued use of natural gas in power plants and to make hydrogen, but they will not do it for free.

It is interesting that this model of operation, with one organisation handling transport and storage of the CO2 and others capturing it, follows closely the recommendation made by the parliamentary advisory committee chaired by Lord Oxburgh in 2016. However, the committee considered that the transport and storage company (“T&SCo”) would have to be government owned to start with. It would be paid by the emitters to dispose of their CO2, while the emitters would be given financial incentives to do so.

At present, it is not at all clear how the promised £1bn will actually be spent by 2025, nor what the legal and financial framework will be, and above all the eventual cost. The parliamentary committee and the Committee on Climate Change estimated that electrical power could eventually be generated at £85 per MWh (in 2012 currency), slightly less than Hinkley Point. This is relatively expensive, but for industrial processes – unlike for power generation – there are currently no alternative ways to decarbonise.  The reports produced this year made considerable progress in determining how CCUS should be implemented, but as Lord Oxburgh noted, the problem is not one of technology but of organisation and regulation. Progress in these areas is needed soon.

[2] It is interesting that a saline water reservoir was chosen over the Hewlett depleted gas reservoir. The former was not only larger and cheaper to develop but there is apparently much more experience of injecting CO2 into saline water (to maintain reservoir pressure), whereas there is not yet any of injecting into a depleted gas reservoir. There are possible problems from the sudden expansion and freezing of CO2 in the latter.