The UK may have the largest offshore wind capacity in the world, but little of it is operated by UK companies. It is well known that most of the equipment and technology for wind farms comes from non-UK firms. What may be less well known is that, according to the Crown Estate, only four of the thirty-eight offshore wind farms currently operational are run by UK companies. In terms of capacity, UK companies only operate thirteen per cent of the 9.7GW.

These numbers do not give the whole picture. For example although the Rampion wind farm offshore Sussex is operated by the German renewables company RWE (according to the Crown Estate) it was developed and constructed by E.ON, a UK energy company. Ownership is even more complex, with RWE being the majority shareholder followed by E.ON and various investment groups.

Nevertheless, UK companies form a small fraction, with most of this provided by SSE, consisting of the Greater Gabbard wind farm off Felixstowe, which at 0.5GW was in 2011 the largest in the world, and the Beatrice wind farm off Caithness. 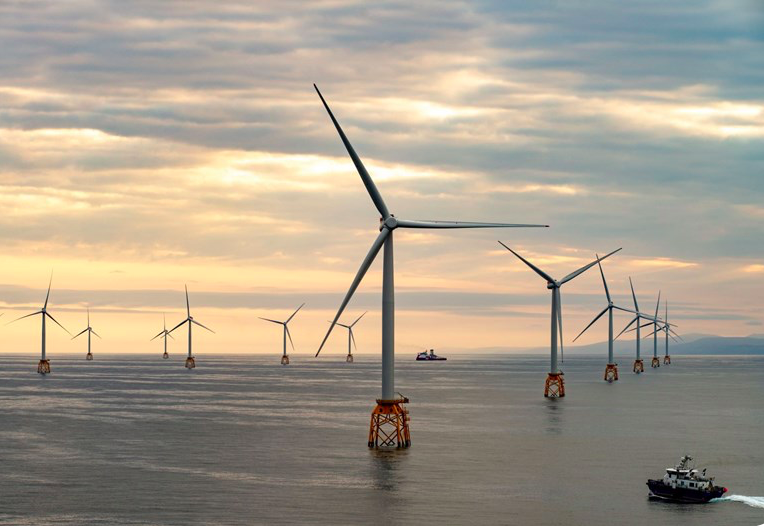 SSE was formed in 1998 from the merger of two recently privatised electricity distribution and supply authorities, North of Scotland Hydroelectric and the Southern Electricity Boards. The company inherited many hydro-electric plants and continued to develop more, at the same time as building several gas-fired power stations and developing the transmission, distribution and supply side.

SSE entered the wind farm business in 2008 when it bought Airtricity, an Irish wind developer that not only operated several onshore wind farms but had successfully bid for a lease of the Greater Gabbard site during the second Crown Estate auction in 2003. SSE subsequently sold a 50 per cent stake to RWE, the German energy group. The wind farm became operational in late 2010 with government support from Renewable Obligation Certificates[1].

In the third auction of 2019 SSE was part of a consortium that successfully won the lease for two large wind farms totalling 2.4GB on Dogger Bank. Later, SSE and Equinor became joint owners and won a Contract for Difference in 2019 of near £40 per MWh for delivery starting in 2023. This low price indicates how far the cost of offshore wind farms had dropped in ten years.

In the fourth auction, whose results were announced in February, SSE lost to BP, RWE and other bidders who paid record high prices. However SSE may not be too disappointed as it already has two large projects totalling 4GW in Scotland in planning.

Alistair Phillips-Davies, the CEO, claims that SSE is the UK’s pre-eminent green company. It had earned the right to be a lead sponsor of the COP26 talks in Glasgow. Mr Phillips-Davies aims to triple SSE’s renewable output by 2030 and to look beyond the British Isles. He plans to invest £7.5 billion over the next five years with 90 per cent in wind farms and power networks.

These claims have some justification but are tarnished by the fact that the company still runs several gas-fired power stations and produces nearly twice as much energy from these as from renewables. It is also actively building a new one in north Lincolnshire. Mr Phillips-Davies is quoted as saying that he will not build any other gas plant in the UK unless they are fitted with CCS or run on hydrogen, and will aim to retrofit existing plants with CCS.

Four such new plants might be built within the next ten years. In his view such plants will be needed to provide backup for intermittent winds farms and will be much cheaper and more flexible than nuclear. However much will depend on government support for CCS.

To help manage intermittency SSE is also looking into a hydro pumped storage project with a potential capacity of 1.5GW in the Highlands. If this and the CCS projects go ahead investment will be greater than the currently planned £7.5bn.

The decision taken by Mr Phillips-Davies and colleagues to buy Airtricity in 2008 was a bold one that has paid off. Another bold decision was to sell the electricity supply arm, generally considered a profitable business, but dropping it has allowed SSE to concentrate more on the future with renewables. The sale has taken time, with some disappointments, but was eventually concluded in January last year with Ovo, who can continue using SSE’s name for three years.

The lack of involvement of UK companies in offshore wind farms is set to continue. Of the 30GW in construction or at some stage of planning, the Crown Estate shows only 8GW being developed by UK companies and almost all of that is by SSE. A further 3.8GW will be developed by Scottish Power Renewables which, although it is based in Glasgow, is a subsidiary of Iberdola, the large Spanish electricity company. As with the data on operating wind farms, these numbers are indicative only, and may not reflect the full contribution of UK companies.

Why are other UK companies not more involved? The unpredictability of renewable output may be one cause. Today SSE issued a trading statement blaming lower generation from hydroelectric and wind sources for a drop in profit over the year. However, compared with the drop due to the coronavirus the loss is small. In general SSE’s financial results are respectable if not striking, but the unpredictability of renewable energy may put off small or conservative companies.

It seems likely that the main players will remain those who got in early and now have the experience (Oersted, RWE, Vattenfall) with the only new players being major oil companies looking for a new business (Equinor, BP, Total).

[1]The cost of Greater Gabbard including cable connections has been estimated as £1.8 billion for an annual output of about 1750 GWh of electricity. It is subsidised under the Renewable Obligation Certificate (ROC) scheme. As an offshore wind farm it receives 2 ROCs each currently worth about £50 per MWh, so the annual subsidy is £87.5million.