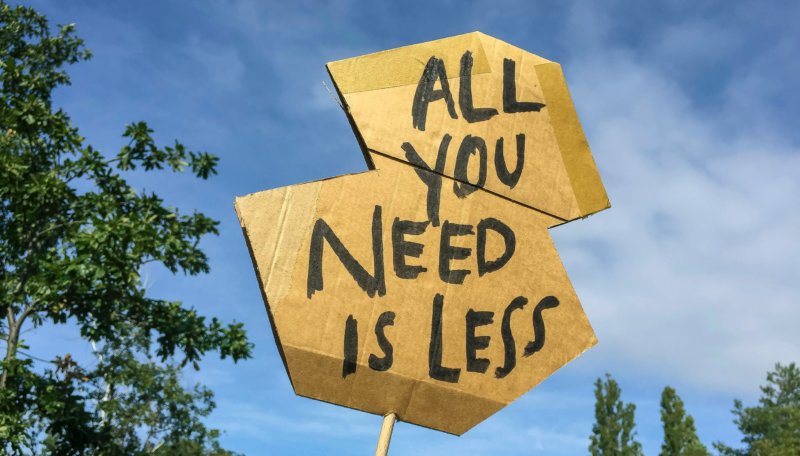 Cutting carbon emissions: Berliners have a word for it. Image: By Etienne Girardet on Unsplash

Global shutdown during Covid-19 has forced down carbon emissions. But no inadvertent pause can replace global resolve.

Five years after a planet-wide vow to reduce carbon emissions, it happened. In 2020, the world’s nations pumped only 34 billion tonnes of carbon dioxide into the atmosphere, a drop of 2.6bn tonnes on the previous year.

For that, thank the coronavirus that triggered a global pandemic and international lockdown, rather than the determination of the planet’s leaders, businesses, energy producers, consumers and citizens.

In fact, only 64 countries have cut their carbon emissions in the years since 195 nations delivered the Paris Climate Agreement of 2015: these achieved annual cuts of 0.16bn tonnes in the years since. But emissions actually rose in 150 nations, which means that overall from 2016 to 2019 emissions grew by 0.21bn tonnes, compared with the preceding five years, 2011-2015.

And, say British, European, Australian and US scientists in the journal Nature Climate Change, the global pause during the pandemic in 2020 is not likely to continue. To make the kind of carbon emissions cuts that will fulfill the promise made in Paris to contain global heating to “well below” 2°C by 2100, the world must reduce carbon dioxide emissions each year by one to two billion tonnes.

That is an annual increase of ten times the cuts achieved so far by only 64 out of 214 countries.

Researchers have, since 2015, repeatedly made the case − in economic terms, in terms of human safety and justice, in terms of human health and nutrition − for drastic reductions in the use of the fossil fuels that, ultimately, power all economic growth.

They have also repeatedly warned that almost no nation, anywhere, is doing nearly enough to help meet the proposed goal of no more than 1.5°C warming by the end of the century. The world has already warmed by more than 1°C in the last century, thanks to human choices. Soon planetary temperatures could cross a dangerous threshold.

And although the dramatic pause in economic activity triggered by yet another zoonotic virus, the emergence of which may be yet another consequence of human disturbance of the planet’s natural ecosystems, is an indicator of new possibilities, the planet is still addicted to fossil fuels.

“The drop in CO2 emissions in response to Covid-19 highlights the scale of actions and international adherence needed to tackle climate change,” said Corinne le Quéré, of the University of East Anglia, UK, who led the study.

“Now we need large-scale actions that are good for human health and good for the planet. It is in everyone’s best interests to build back better to speed the urgent transition to clean energy.”

The latest accounting suggests that there has been some movement, though simply not enough. Between 2016 and 2019, carbon emissions decreased in 25 out of 36 high income countries. The USA’s fell by 0.7%, the European Union’s by 0.9% and the UK’s by 3.6%, and those emissions fell even after accounting for the carbon costs of goods imported from other nations.

Of the middle income nations, Mexico’s carbon emissions dropped by 1.3% and China’s by 0.4%, a dramatic contrast with 2011-2015, when China’s emissions had grown by 6.2% a year. But altogether, 99 upper-middle income economies accounted for 51% of global emissions in 2019, and China accounted for 28% of the global total.

Even in the US and China, money is still going into fossil fuels. The European Union, Denmark, France, the UK, Germany and Switzerland are among the few countries that have tried to limit fossil fuel power and implement some kind of economic “green” stimulus.

The message is that, after a series of years in which temperature records have been repeatedly broken, years marked by devastating fire, drought, flood and windstorm, nations need to act, and at speed, to honour the Paris promise to cut their carbon emissions.