When we last wrote about Simec Atlantis Energy in March 2019 the company had just transformed itself from a tidal power developer into a “global developer of renewable and sustainable energy projects”.

Behind this was an admission that tidal power was not going to break through to commercial success, at least not in the short term. A striking indicator was the auction of Contracts for Difference in 2017 at which Atlantis had bid £300 per MWh for MeyGen, its tidal stream project in the Pentland Firth, while offshore wind projects were bidding as low as £57.5 per MWh. Not surprisingly it failed.

As a result in May 2018 Atlantis, as it was then called, diversified by acquiring a power plant in South Wales, SIMEC Uskmouth Power, with the help of a large injection of capital from the previous owner, GFG Alliance, and a change of name to Simec Atlantis Energy (SAE). Subsequently, in November 2018, the company started the process of acquiring Green Highland Renewables (GHR), another of GFG Alliance’s subsidiaries.  GHR owns or maintains over forty small hydro-electric power stations in Scotland. 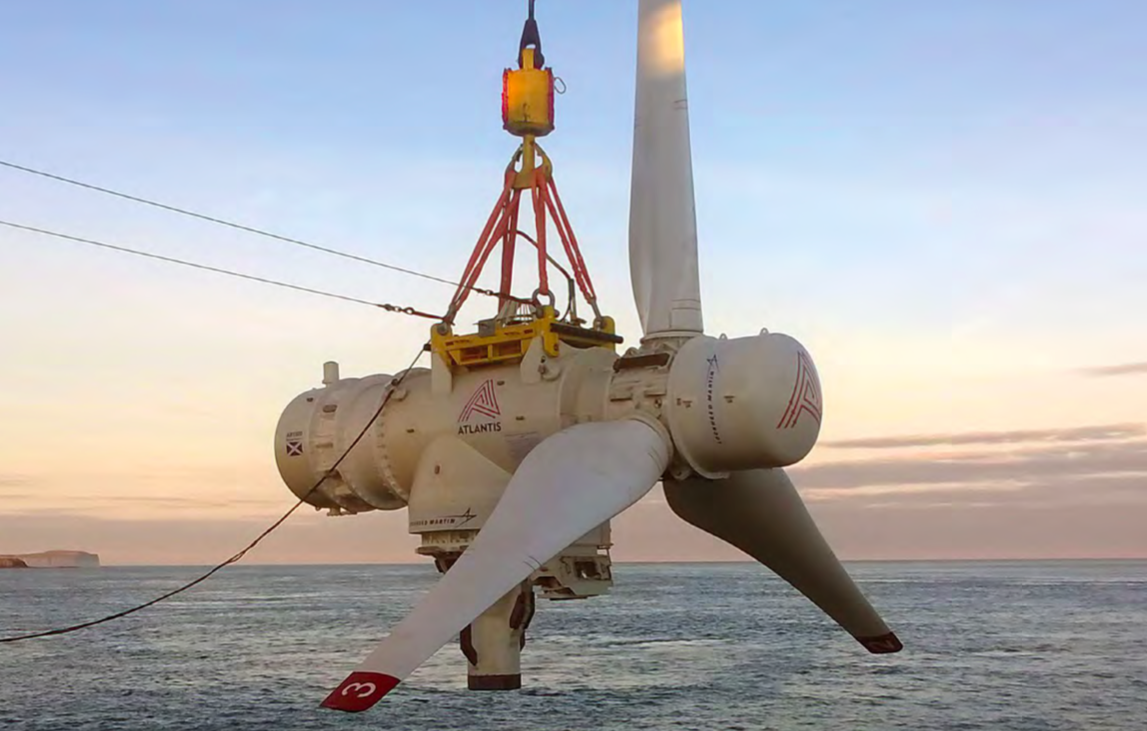 A tidal stream turbine, from www.simecatlantis.com

SAE therefore has three divisions: Marine (tidal stream), Thermal (power plants) and Hydro. The marine division is not entirely dead. By late 2020 MeyGen had generated over 35 GWh of electricity, and had received a grant of £1.5m from the Scottish Government to develop a subsea connection hub to allow further expansion. In Japan a 500 kW turbine was installed and commissioned in February 2021. The EU includes 40GW of ocean energy in its renewable energy target for 2050. To access the subsidies that will support this goal SAE has established a joint venture with Normandie Hydroliennes to sell tidal stream generators in NW France.

On the negative side, SAE has had to retrieve two of the subsea turbines on the Meygen project for repair. Also, in 2019 SAE wrote off the value of several tidal development leases, while in 2020 it decommissioned its tidal turbine support structure in Strangford Narrows, Northern Ireland. This structure had been used as a test bed for tidal stream development.

The thermal division’s Uskmouth Power project is the conversion of a coal-fired power station to use pellets derived from waste. The company’s interim results for June 2018 stated that it was “…on track to have first power generation from the converted plant in 2020”. Alas, it is still a long way off. On 3 Feb SAE announced that the local and Welsh governments were still wrestling with planning permission for the changes.

At the same time SAE has been working to secure the supply of waste pellets by forming a joint venture with N&P Fuels, a Dutch specialist in fuel from waste. The venture will install fuel production plants at several UK locations. Half of the pellets will be formed from paper and card, and half from plastics of different types. These may seem to be rather poor scrapings, but such pellets have been shown to produce sufficient energy at a Mitsubishi Research Centre in Japan.

Between the need to develop a reliable fuel supply and the delay in planning permission the final financial decision is not expected until the second half of 2021. Should this project be successful it will provide a template for solving two difficult worldwide problems: what to do about existing coal-fired power stations, and what to do about unwanted waste. The potential market is large.

The Hydro division provides a small but welcome revenue (£0.5m in 2019) and continues to expand, expecting to add three new projects with a total capacity of 5.8MW in H1 2021.

In January SEA recruited a new CEO, Graham Reid, with experience in managing renewable and other engineering companies. He will have a challenging job managing a diverse set of technologies, two of which (tidal stream and waste to power) have potential but high risks.