The H100 Fife project: the first real-life test of hydrogen for residential heating

The H100 Fife project is designed to be a real life test of the use of hydrogen for heating homes. The idea is to build a facility in Levenmouth, Fife, that will use offshore wind power to generate hydrogen from electrolysers. The hydrogen will be stored on site and used to feed a hydrogen network to be built in the local area. The site will include a building resembling three terraced houses typical of the area. Two of them will be plumbed with a range of hydrogen-fueled appliances, such as boilers, hobs and ovens, which visitors can operate in order to get confortable with the idea of hydrogen in the home. The third will be used for meetings and other facilities.

Once ready in 2022, local residents will be invited to connect to the hydrogen network rather than their current natural gas network. The first 300 residents will not be charged for the changeover, nor for the new hydrogen appliances, nor for maintenance during the life of the project (expected to be until March 2027). They will pay the same for the hydrogen as they would have paid for natural gas. The scheme will later be expanded to 1000 homes, although it is not clear if the terms will be the same.

The voluntary aspect of H100 Fife is considered important for its acceptability. One appliance manufacturer, Bosch, states that its appliances will have a switch allowing customers to turn back to natural gas if wanted. 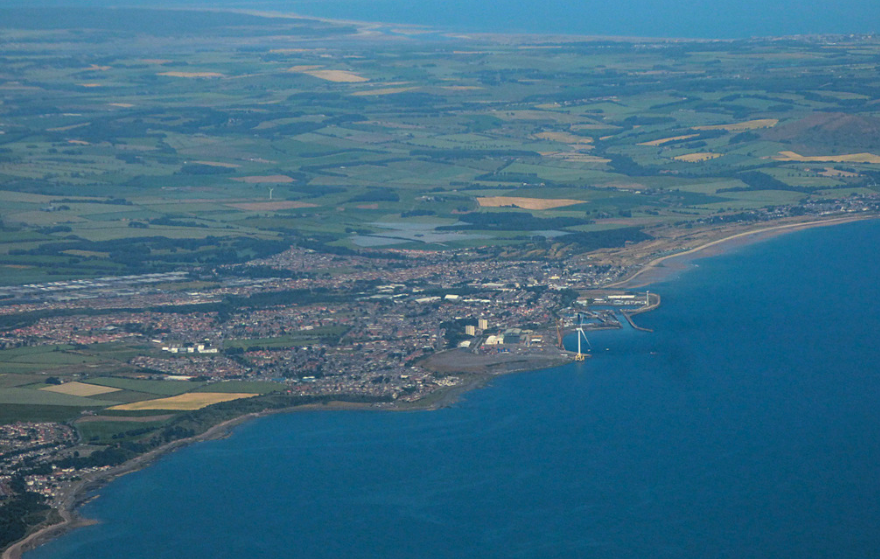 The Levenmouth area of Fife (www.wikipedia.org)

Unlike the H21 project (previously Leeds H21, see Greenbarrel, Aug 2020), which initially focused on the problem of changing networks from natural gas to hydrogen, H100 Fife is focused on obtaining as soon as possible some actual experience of using hydrogen for residential heat. There is plenty of overlap in the preliminary work, mainly related to hydrogen safety, but it is not clear how much both projects are relying on the same studies or whether they are doing them in parallel.

The project is under the control of Scottish Gas Networks (SGN) who run the gas networks in Scotland and SE England. It is not surprising that H100 Fife, like H21, is controlled by a gas network company. Without hydrogen, their whole gas network will eventually be worthless.  On the other hand it perhaps issurprising that such projects have not surfaced sooner. It seems that other network companies do have such projects planned but Fife is the first council to approve one. It claims to be the first in the world, which may be true based on the size and “real life” conditions with the options to switch back.

On 30 November the project received approval from the energy regulator Ofgem as well as £18 million from its Network Innovation Competition. This has triggered a further investment of £6.9m from the Scottish Government, with further funding from SGN and three other network companies.

Levermouth was probably chosen because it is already familiar with hydrogen. In 2011 the town inaugurated The Hydrogen Office Project, which consists of three office buildings powered by a wind turbine whose excess power was converted and stored as hydrogen for times of low wind. In 2014 the project was expanded to become the Levermouth Community Energy Project in which renewable power and hydrogen storage was provided to a mini-grid for a whole business park, as well as for a fleet of seventeen community vehicles, including two refuse collection vehicles.  It is claimed that the latter, made by Renault, were the first in the world.

Levermouth, which lies on the north of the Firth of Forth, used to be the centre of the Fife mining area, with large amounts of coal being exported from its docks. Part of the motivation for these projects has been to show how such old industrial areas can be rejuvenated with new technologies. The hope is that it will become a large exporter of hydrogen.

As Jacob Young, MP for Redcar and Chair of the All-Party Parliamentary Group on Hydrogen says “in the future either we will be importing hydrogen from Germany or they will be importing it from us”. Levermouth wants to make sure it is the latter.