Floating offshore wind turbines are starting to receive a lot of publicity, but people have been working on them for some time. According to the Global Wind Energy Council (GWEC) small-scale tests were being performed in the 1990’s. They have much in common with offshore oil field platforms, so it is not surprising that development has proceeded along the same lines with three main types: tension-leg, semi-submersible and spar, as shown in the drawing below. 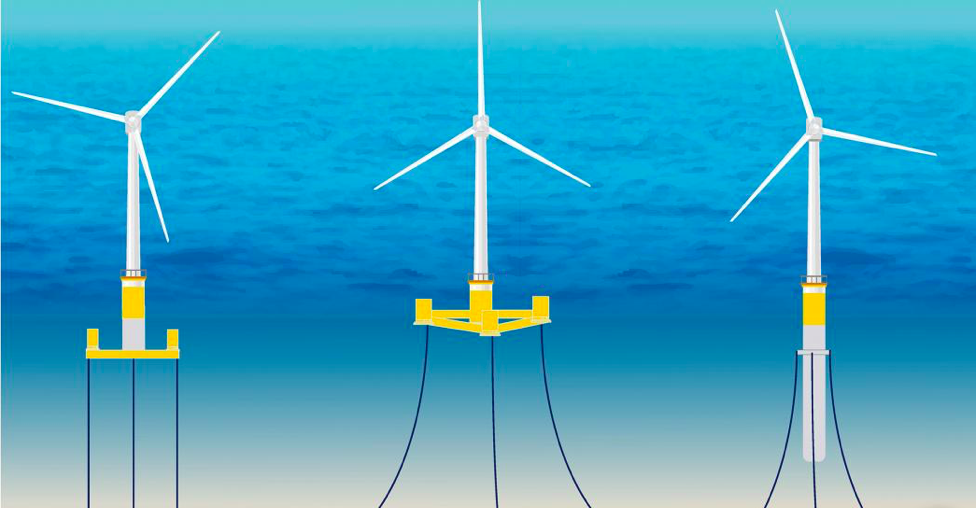 In the tension-leg design the mast is built on a floating platform that is stabilised by cables held under tension with fixed points on the sea floor. For the semi-submersible, stabilisation is provided by three or more large cylinders filled with ballast and air. Water is pumped between the cylinders to maintain stability when, for example, the wind direction changes. The spar has a large underwater tube filled with ballast and air that is held in place by cables.

There are pros and cons to each design. The main criteria are the stability in the face of strong winds and high waves, the ease of construction and installation, and of course the cost. GWEC reports that of the fifteen floating projects that are in operation now or the near future, ten will be semi-submersible and five spars.

The first floating wind turbine was in fact a tension-leg design, installed in waters 113m deep offshore Puglia, Italy, in 2007 by Blue H Technologies of the Netherlands.  It was only intended as a prototype and was decommissioned in late 2008. The next was also a prototype: a spar design of 2.3MW capacity installed offshore Norway in 2009 by Equinor. The prototype was evidently a success as to led to the first commercial floating windfarm, the 30MW Hywind project off Peterhead, Scotland which went on-line in October 2017 (Greenbarrel, Nov 2019).

In the meantime Principle Power of California designed Windfloat, the first semi-submersible turbine. A consortium led by EDP, Repsol and others installed a 2MW prototype off Portugal in 2011. It survived wave heights up to 17m and was decommissioned in 2016. Following the Fukushima nuclear disaster Japan announced its intention of investing heavily in floating wind turbines. Fukushima Forward installed the first prototype, a 2MW tension-leg platform, in 2013.

In spite of all this activity GWEC, and most commentators, consider that floating wind farms are still in the pre-commercial phase. They are still considerably more expensive than fixed-bottom installations. For example the Hywind project is quoted as costing US$6.6 million per megawatt (MW) of capacity, whereas fixed-bottom installations typically cost between US$2m and $3m per MW.

There are advantages to offset the extra cost. Winds are usually stronger and more reliable further out to sea; depending on the type of installation the disturbance to the sea bed is less and the in-situ installation can be easier. Since they can be placed further from land there will be fewer objections from local residents while, of course, in many areas the water will be too deep for fixed-bottom installations.

The costs can and will come down. One of the problems is the diversity of design, making each installation almost unique. It is not surprising that with the large sums at stake, companies and academic institutions have spent a considerable time designing and modelling different versions. It is only when a few designs have become accepted that economies of scale and experience will be achieved. Developers dream of a time when the platform and sub-sea equipment is standardised and becomes mass-produced.

Even so GWEC claim that 1000MW of floating projects will be built world-wide by 2025. Utility companies such as EDF, Iberdrola, EnBW are starting to invest heavily, as are some oil companies. Equinor is continuing, while Shell has bought the French designer EOLFI. Total, and Shell, have joined a consortium with Principle Power in the Erebus project, which will install a 96MW floating wind farm in the Celtic Sea south west of Wales, with long term plans for 1000MW.

Only a few years ago the cost of fixed-bottom wind farms looked impossibly high compared to onshore farms, but the cost decreased remarkably rapidly. Floating farms can follow the same trajectory. Their future looks bright.