The IEA predicts a bright future for the offshore wind industry but there is a problem: wind farms fixed to the sea floor are not yet commercially viable in water depths above 50-60 metres. The southern North Sea, for example, is generally shallower than this but the northern part is not. Floating wind farms are the solution, but they are still new. At present the sole commercial floating wind farm in the world is the Hywind Scotland project which lies 25 miles off Peterhead and consists of five floating turbines in water depths that average 105 metres. It went on-line in October 2017.

Each turbine and its mast sits on top of a large cylinder 14m in diameter that extends 78m below sea level and is linked by large chains to three suction anchors on the sea floor. The cylinder is three quarters empty, so as to provide buoyancy, the rest being filled with water and 5500 tonnes of iron ballast at the bottom to provide stability (thus the centre of gravity of the structure is below the centre of buoyancy). The masts, turbines and rotors are typical, with the masts 98m tall and the rotor blades 77m long.

It is no surprise that the operator and developer of the project is Equinor, ex-Statoil, who have years of experience with semi-submersible drilling rigs and offshore platforms. The basic Hywind principle is the same as that used for so-called spar production platforms in the oil industry, but with the mast and turbine replacing the actual platform. However the powerful turbine, designed to capture the wind rather than avoid it, poses new problems. To prove the concept Equinor built a prototype in 2009 and tested it off Norway for six years. During this time they learnt, among other things, how to trim the rotor blades automatically so as to minimise rocking of the structure and how to maximise the energy produced. 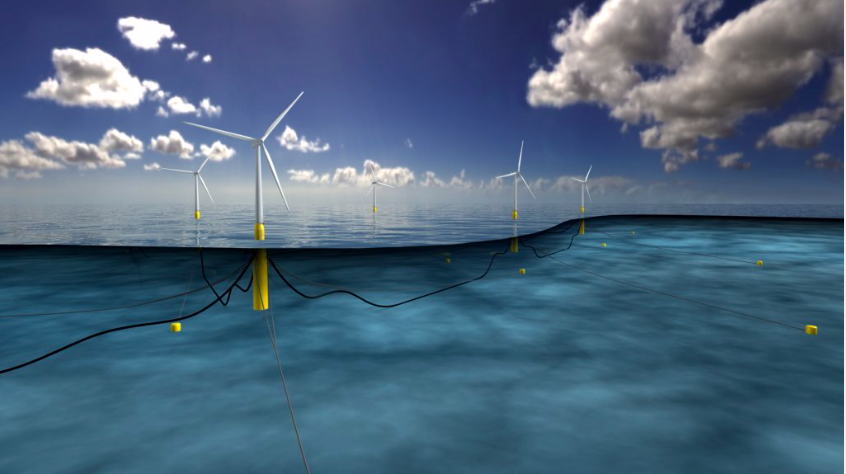 The total capacity of the Hywind Scotland wind farm is 30 MW. It produced 140 GWh of electricity in 2018, giving a capacity factor of 53 per cent, considerably higher than the average of 40 for all UK offshore wind in the same period.  One advantage of floating wind farms is that they are further from land so that not only are they less visible but average wind speeds are higher, and thus produce more power for the same investment. Another advantage is that the whole structure can be built and assembled on or near land before being towed out to its location. This contrasts with fixed bottom structures that involve pile driving and tricky sea floor work at the offshore location with more impact on the environment.

It is also no surprise that a floating wind farm is expensive. Hywind Scotland is quoted as costing just under £200 million or £6.7m per MW, compared with nearly £4.0m per MW for fixed bottom projects including transmission of electricity to shore. For this it was awarded £160 per MWh in Renewable Obligation Certificates, a large amount.

But this was the first one. Equinor says it expects to cut the capital costs in half by 2023. The IEA’s estimate for the mid 2020’s is slightly higher. Equinor also hopes to achieve a levelised cost of electricity of 40 to 60 euros by 2030. This is close to the range predicted for all offshore wind by the IEA.  If these forecasts are true, floating wind farms can indeed take off.

Elsewhere, most work to date has not reached the commercial stage. Two small demonstration projects using different methods of flotation were installed in Japan (Hibiki) and France (Floatgen) in 2018.  Shell recently announced the purchase of EOLFI, a French renewable energy company working on another floating wind farm design, this one looking like a small semi-submersible drilling rig. Several projects the size of Hywind Scotland are in the works in Europe, and Equinor are taking it to another level with a 200MW project off the Canary Islands due to be running in the mid-2020’s. In a few years we can expect to see many more commercial floating wind farms.