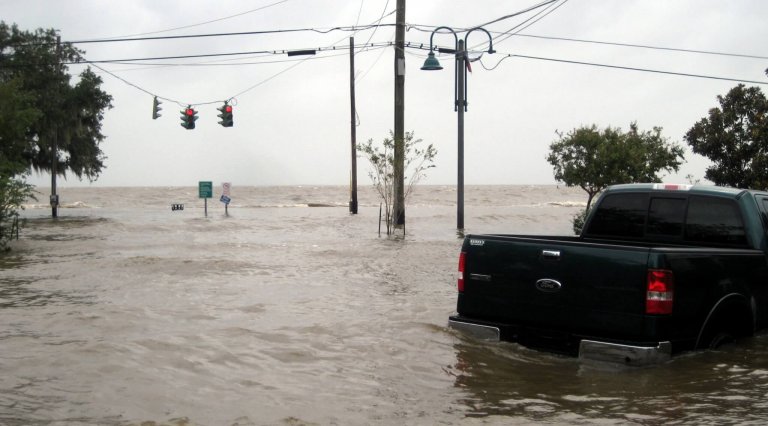 Hurricane Ike leaves its mark on Mandeville, Louisiana in 2008. Image: By Tobin, via Wikimedia Commons

The poorer and more vulnerable you are, the greater your hurricane risk. Even a tiny heat rise can spell disaster.

Any climate change at all will mean a hurricane risk for the storm-prone Caribbean, even if global average temperatures are contained to a rise of no more than 1.5°C by 2100. But a rise of 2°C could be disastrous: the hurricane hazard could grow fivefold.

The figures – each representing a rise above the long-term average for most of human history – are significant. In 2015 195 nations, including the US, signed up to the Paris Agreement – a promise to contain the rise in global heating to “well below 2°C” by the century’s end. The undeclared but widely-understood intention was a limit of 1.5°C.

In the last century, in response to a rise in carbon dioxide emissions from fossil fuel use, planetary average temperatures have already risen by 1°C, and the Atlantic states of the US and the islands of the Caribbean have been hit by a series of ever more devastating windstorms, as ocean temperatures warm and make hurricanes more probable.

And researchers warn that as global heating continues – with forecasts of a rise of more than 3°C by 2100 – more are on the way.

But the US is wealthy and resilient. British scientists report in the journal Environmental Research Letters that they decided to take a look at the probability of windstorm and heavy rainfall assault on the Caribbean, where half of the 44 million people of the archipelago live within 1.5kms of the coast, and where devastation can be so intense it could take six years to recover.

So they used computer simulations to generate thousands of synthetic hurricanes, under three climate scenarios: present day conditions; a world that kept global heating to no more than 1.5C; and one in which nations let rip and hit the 2°C imit.

They found that extreme rainfall events of the kind which typically happen once every hundred years at present do indeed become more numerous in a world that sticks to its implicit Paris promise. But in a 2°C warmer world, calamitous hurricanes became five times more frequent.

When Hurricane Maria hit Puerto Rico in 2017, it delivered a quarter of a year’s average rainfall all at once, with appalling consequences. In a two-degree warmer world, such a storm could happen every 43 years. The storm that hit the Bahamas in 2019 could become 4.5 times more likely.

“The findings are alarming and illustrate the urgent need to tackle global warming to reduce the likelihood of extreme rainfall events and their catastrophic consequences, particularly for poorer countries which take many years to recover,” said Emily Vosper of the University of Bristol, who led the study.

“We expected extreme hurricanes to be more prevalent in the 2°C global warming scenario, but the scale of the projected increases was surprising, and should serve as a stark warning across the globe, underscoring the importance of keeping climate change under control.” – Climate News Network

Tim Radford  a founding editor of Climate News Network, worked for The Guardian for 32 years, for most of that time as science editor. He has been covering climate change since 1988