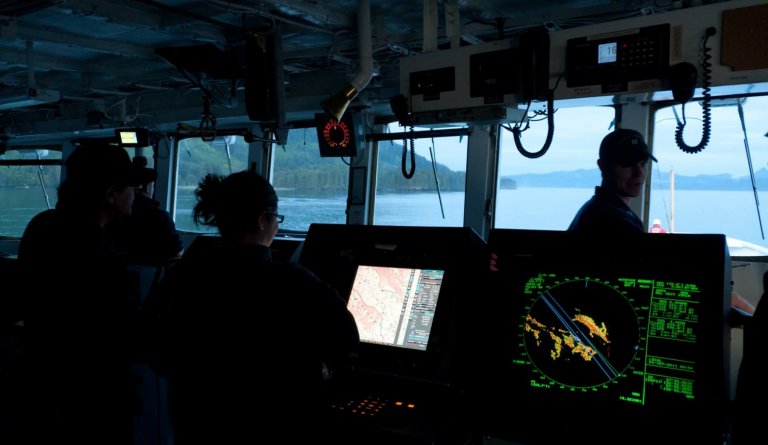 Most oceanographic research vessels were recalled to their home ports in March. Image: By NOAA on Unsplash

Climate research is suffering permanent damage from some of the Covid-19 pandemic’s impacts, a UN report says.

Whatever else the coronavirus onslaught is doing to humankind, some of the pandemic’s impacts are clear. It is making it harder for researchers to establish just what effect climate change is having on the planet.

A group of United Nations and other agencies is today launching a report, United in Science 2020, (webcast at 1600 hours New York time) which it calls “a high-level compilation of the latest climate science information”. It is being launched by the UN secretary-general, António Guterres, with a virtual link to his counterpart at the World Meteorological Organisation,  Petteri Taalas, in Geneva.

Much of what the report says will already be familiar, but its detailed finding that the pandemic is causing long-term damage to climate change monitoring is sobering.

Science advances by combining knowledge of the past with experience of the present and then combining them to forecast the probable future. That is how climate scientists have been able very recently to state that their earlier worst case scenario isn’t just an awful warning, but describes what is happening right now.

Several contenders have vied to be identified as the one who wrote: “You cannot manage what you cannot measure.” Which of them − if any − really did write that may not matter much. But it certainly matters for today’s researchers to know where the biosphere came from and where it is now if they are to have any idea where we shall all be in a few years.

So it’s alarming that United in Science 2020, in its section on earth system observations, says: “The Covid-19 pandemic has produced significant impacts on the global observing systems, which in turn have affected the quality of forecasts and other weather, climate and ocean-related services.

“The reduction of aircraft-based observations by an average of 75% to 80% in March and April degraded the forecast skills of weather models. Since June, there has been only a slight recovery. Observations at manually-operated weather stations, especially in Africa and South America, have also been badly disrupted.”

In March this year, it says, nearly all oceanographic research vessels were recalled to home ports. Commercial ships have been unable to contribute vital ocean and weather observations, and ocean buoys and other systems could not be maintained.

Four “valuable” full-depth ocean surveys of variables such as carbon, temperature, salinity, and water alkalinity, completed only once every decade, have been cancelled. Surface carbon measurements from ships, which cast light on the evolution of greenhouse gases, also effectively stopped.

The impacts on climate change monitoring are long-term. They are likely to prevent or restrict measurement of glaciers and the thickness of permafrost, usually conducted at the end of the thawing period.

In an ominous warning the report notes that the overall disruption of observations will introduce gaps in the historical time series of Essential Climate Variables, vital for understanding what is happening to the planetary climate.

The report’s authors are also concerned about climate and water, where they expect the pandemic’s impacts to intensify existing problems. By 2050, they say, the number of people at risk of floods will increase from 1.2 billion now to 1.6 bn.

It is estimated that central Europe and the Caucasus have already reached peak water, and that the Tibetan Plateau region will do so between 2030 and 2050.

Runoff from snow cover, permafrost and glaciers in this region provides up to 45% of the total river flow, so a decrease would affect water availability for 1.7 bn people.

United in Science 2020 also says the world is a very long way from living up to its promises, with the targets of the Paris Agreement on climate change nowhere near being met.

The UN’s Emissions Gap Report 2019 compares “where we are likely to be and where we need to be” on cutting emissions of greenhouse gases (GHGs). The annual series of Gap Reports use gigatonnes (Gt) as units of measurement: one gigatonne is a billion metric tons.

Another frequent formula is GtCO2e, an abbreviation for “gigatonnes of equivalent carbon dioxide”. That’s a simplified way to put emissions of various GHGs on a common footing by expressing them in terms of the amount of carbon dioxide that would have the same global warming effect.

The 2019 Report says GHG emissions reached a record high of 55.3 GtCO2e in 2018. It continues: “There is no sign of GHG emissions peaking in the next few years; every year of postponed peaking means that deeper and faster cuts will be required.

“By 2030, emissions would need to be 25% and 55% lower than in 2018 to put the world on the least-cost pathway to limiting global warming to below 2 ̊C and 1.5°C respectively” [the two Paris Agreement targets].

The Gap in 2030 is estimated at 12-15 gigatonnes if the world is to limit global warming to below 2 °C. For the 1.5 °C goal, it is estimated at 29-32 Gt, roughly equivalent to the combined emissions of the world’s six largest emitters.

That’s an awful lot of GHGs which, as things stand, are going to be adding their heat to a torrid world a decade from now. − Climate News Network

Alex Kirby is a former BBC journalist and environment correspondent. He now works with universities, charities and international agencies