Why does Boris not seek to garner the environmentalist vote in the UK? What about CCS?

The last French local elections held a clear message: a large number of voters deserted their old allegiances and voted for the environmentalists. The “deserters” seem to have included former socialists and, to a lesser degree, former conservatives. This trend could also be seen to be the result of the local elections in Germany and, more recently, in Ireland, where the Greens have now entered the Government. (See Greenbarrel of 7 July)

So it could be argued that at the moment there are votes to be gained in Europe by a show of environmental zeal.  Could this also be true in the UK? Yes, but no-one seems to be doing anything about it. In a sense, the virus has helped Boris; he was already credited with considerable scepticism about the much-touted expansion of Heathrow. Then, and before the virus struck, the expansion was delayed by the Court’s verdict. The Government made it clear that they would not support an appeal against that verdict, leaving it to be mounted by the owners of Heathrow acting alone.

But since then there have been no apparent initiatives in favour of the environment. Yet the choices are clear: for example, do we assist the car industry as a whole, or do we target assistance to electric cars production alone? More broadly, do we help the British economy as a whole, or do we favour action to support and encourage the “Green” economies of the future? And what about Carbon Capture and Storage (CCS), the big picture answer to so many of our de-carbonisation problems? 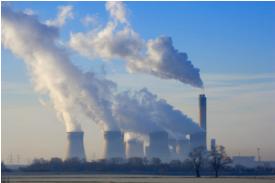 In 2015, the Treasury cancelled a (second) competition for CCS, for which they had earmarked £1billion, on the grounds that the competition was “uneconomic”. The competition was designed to find the best solution to storing permanently underground emissions from heavy industry. For CCS enables significant emissions reductions in energy intensive industries (such as iron & steel, cement and refining), heat, power and transport. In combination with natural gas, CCS has allows the production of large volumes of low-carbon hydrogen – which is fast becoming an extremely attractive solution for decarbonising heat and transport, a critical solution for achieving net zero emissions by 2050 across the UK economy. The expert Committee on Climate Change (CCC), in its 2019 report “Net Zero: The UK’s contribution to stopping global warming“, concluded that the UK will need to capture and store between 75-175 Million tons of CO2 annually by the year 2050, if it is to meet net zero. That is a huge task.

Thus how the current Government deals with CCS will be crucial in determining their attitude to the environment, both environmentally and politically. At the time it was cancelled, the competition had two preferred bidders: the White Rose consortium in North Yorkshire which planned to build a new coal plant with the technology, and Shell’s scheme in Peterhead, Aberdeenshire, to fit CCS to an existing gas plant operated by SSE. Drax power station in North Yorkshire was also involved. So this was a competition between companies in the North and in Scotland, key areas for Boris, in terms of UK politics.

A report by the National Audit Office (NAO) said that the Treasury considered that the (second) competition was aiming to deliver CCS before it was cost-efficient to do so; that it would not guarantee further investment needed to expand the technology; and that there were better uses for the £1bn. The head of the National Audit Office, said: “The department has now tried twice to kick-start CCS in the UK, but there are still no examples of the technology working. The department must learn lessons from this [competition] experience if it is to stand any chance of ensuring the first CCS plants are built in the near future.”

But the Scottish government’s minister for energy, Paul Wheelhouse, said that the final cost of  UK ministers’ failure to provide leadership and commitment to CCS will be far higher if, we do not “Capitalise on our expertise in this area and our existing infrastructure which could be used to deliver large-scale carbon capture and storage.”

So where was action on CCS in the Chancellor’s statement on 8 July? Surely it is time to start learning the lessons referred to by the NAO head?