Two well-known facts about offshore wind turbines are that they are getting bigger and that the price of the electricity they produce is getting less. Some climate sceptics have doubted that the installers will be able to operate at the prices tendered and that the wind farms will never be built.

On 26 May at an on-line session as part of the Oxford Energy series Professor Bryon Byrne made a presentation that helped explain why these prices are achievable. Entitled “Civil and Geotechnical Engineering Design for Offshore Wind Turbines” his talk showed how the work done to understand the sub-sea support for the wind turbine had allowed larger turbines to be built and the cost per Megawatt (MW) of power to be reduced.

Various structures have been used to support offshore turbines but in most situations today the monopile is preferred. This is a single large diameter tube, typically 10m or more in diameter, that is driven into the seabed to a depth of several tens of metres. The mast and turbine are attached above. The turbine acts on the monopile rather like someone who wants to remove a fence post from the ground: the post is wiggled backwards and forwards until it becomes loose and eventually falls over. 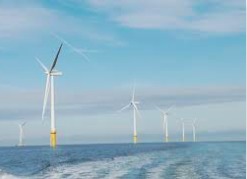 For the geotechnical engineer the question is how long and how wide does the tube have to be in order for the turbine not to fall over in the twenty-five years of its expected lifetime. To help answer this question the PISA project (Pile Soil Analysis) was started at Oxford University in 2012 under the auspices of the Carbon Trust. It was subsequently expanded to include, among others, Imperial College, University College Dublin and a working group of most major European wind installers headed by Orsted.

The heart of the project is a computer model of all the mechanical forces affecting the turbine, mast and monopile. This model is calibrated and checked against small-scale laboratory experiments, mid-scale field experiments using 2m diameter piles and by monitoring actual wind installations. Since the model may take more than a day to compute a single case, commercial developers use simpler models that are calibrated to the main model.

The stability of the monopile also depends strongly on the nature of the rocks beneath the seabed. For this reason the rocks need to be sampled and their mechanical properties entered into the model. The seabed around the UK varies but in general is favourable for the placement of monopiles.  Others may be less lucky.

Of course there is another important constraining factor on the length and width of the monopile, which is the cost. The goal is to find the optimum cost/benefit ratio. The main result of the PISA project has been to show that for a given pile size much bigger turbines could be supported, by a factor of at least two more than was previously considered safe.  This has allowed monopiles to replace the more expensive jackets (similar to those used for oil platforms), and for the turbines to be taller with larger blades, hence producing more electricity.

PISA is not the end of the road. The experiments that verified its model involved regular shaking of the monopile in one axis. However in practice the turbine at the top of the mast subjects the pile to shaking in all directions at random amplitudes. These forces will be studied in a follow-on project called PICASO.

It is expected that these studies will help introduce even larger turbines. Currently new offshore wind turbines produce on average 4.2MW per turbine with a capacity factor of 58 per cent (up from 41 per cent in 2015).  Siemens Gamesa recently unveiled a turbine that has blades 108m long and a capacity of 15MW.

Taller turbines allow greater economies of scale as well as capturing the stronger winds that are found at greater heights. These factors plus better engineering and better risk assessment all help to reduce the cost per MW, which is why installers are able to bid for projects at ever lower prices.

Professor Byrne pointed out that these large structures could not be installed on land because of the problems of transporting the components from factory to site. Overall his presentation showed how careful engineering can have a large effect on the financial viability of projects, and gave confidence that offshore wind can deliver a large part of the renewable energy that will be required, at least in the UK.