Time was IGas Energy’s story was one of a small conventional UK oil and gas producer. It also had potentially great value upside through its large unconventional shale holdings throughout the UK.  Now, with the so-called shale revolution on hold because of a government-imposed moratorium in 2019, we are looking at how IGas is progressing its conventional energy business, while it ruminates about its shale gas future.

On April 9 2020 IGas reported on the company’s ‘Full year results for the year ended 31 December 2019’.  The report received a warm welcome from some interested parties. Charlie Sharp, the analyst at broker Cannacord Genuity said: “IGas’s FY19 results highlight the company’s strengths in the present difficult macro environment. The company has full control over its diverse set of onshore producing fields, which we believe is an important benefit while the COVID-19 virus threatens; for example, many other producers have more concentrated production offshore.”

He adds: “These operational benefits are allied to the strength of the balance sheet, with net debt of only £6m and no pressing maturity issues. Furthermore, the cash flow in 2020 should be well-supported by an impressive hedging plan. We think a combination of operational control and a robust balance sheet provide a degree of comfort which is rare in the sector at present.”

So, no surprises in the results. The details behind Charlie Sharp’s comments were:–

Having detailed the positive Final Results for the conventional oil activities, the report moves on to shale gas. Before examining the shale situation as the company sees it, however, perhaps it is useful to look at exactly what IGas’s exposure to shale gas exploitation actually has been. 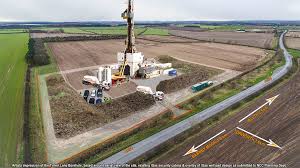 Before the moratorium was declared IGas held, and presumably still does hold, around one million acres hosting several licences in the Bowland Shale basins in the north Midlands and the North of England. Early surveys estimated that the company’s acreage could hold 80 trillion cubic feet (tcf) of gas-initially-in-place. Given that the UK consumes under 4 tcf a year of gas, even with low recovery rates of, say, 10 per cent, IGas could theoretically provide gas for the whole country for two years.

Moreover, IGas clearly has the wherewithal to exploit its assets. Jim Ratcliffe is the head of the INEOS company which owns Grangemouth, the huge refining and petrochemicals complex, that accounts for 4 per cent of Scotland’s GDP. By 2017 he had decided he wanted to acquire shale acreage to further his ambition to go into the power supply sector. Accordingly, he bought out the French oil company Total’s and other investors’ interests in IGas to the tune of £183m.

Ratcliffe’s investment was in IGas’s assets and not its equity. This war chest is still extant at £183m, give-or-take that some funds had been spent not only on conventional prospects but also on the search for shale gas. Starting in January and February a number of wells were drilled at the Springs Road site in North Nottinghamshire and they were successful. Soon after the drilling Stephen Bowler, CEO of IGas said: “We are seeking to provide future energy solutions through our potentially world class shale gas discovery at Springs Road in the Gainsborough Trough”. He didn’t say how many cubic feet of gas this “world class” discovery might produce.

He does, however, seem keen that shale gas and IGas will have a future role somehow in the energy mix even as the clamour intensifies that all fossil fuels should be replaced by renewable energy and nuclear power. Commenting in the Final Results report for 2019 Mr Bowler said: “We are committed to supporting the British Government’s target of reducing greenhouse gas emissions to net zero by 2050.”

He added: “The Committee on Climate Change (CCC) in its May 2019 report, clearly forecast a very significant UK gas demand out to 2050 and beyond – approximately 70 per cent of 2019 gas demand still exist in 2050 in a net zero scenario. Under the CCC’s recommended pathway to net zero C)02, this gas would be used as both a feedstock for making hydrogen and a backup supply for generating electricity; and they recommended that we use domestically produced gas. Without new supplies of gas it is expected that we will be importing over 80 per cent of our gas requirements by 2050.”

Sounds like IGas, one way or another is determined to stay in the shale gas game, if there is one, come the day? We shall see. The share price of the £35.50m market cap IGas was 30.50 pence last evening against a 52-week high of 74p and a low of 21.40p. Brokers’ analysts were at variance with their target prices. BMO Capital Markets set theirs at Charlie Sharp at Cannacord Genuity opted for 45p while Investec quoted 75p but said it was under review.