Last week saw Shell release its three hundred and six page annual report, “Energy for a better future”. It was drafted before the recent collapse of the oil price and any proper assessment of the full impact of the Corona virus. At the time there was much news focus on the dividend issue (Shell cut theirs for the future for the first time, by contrast with BP, who chose to keep the dividend at the same level as before). But Shell’s approach to Climate Change was of more long term interest, subject to the uncertainties of what the future may now hold.

Paradoxically, the overall context for Shell is best set not by the Chairman, but rather by the CEO, Ben van Beurden, who is quoted as saying “We wholeheartedly support the goal of the Paris Agreement to limit the global average temperature rise to well below two degrees Celsius above pre-industrial levels” The section on Climate Change and Energy Transition adds “and to pursue efforts to limit the temperature increase even further to 1.5 degrees Celsius 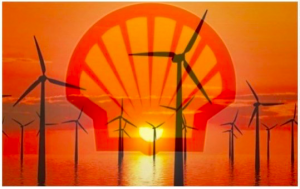 The remarks of the Shell Chairman, Chad Holliday, amplify this: in his introduction he states “In the coming years, as the urgency around climate change grows, our customers will want cleaner energy to power their homes, businesses and transport. We intend to move with them, investing in power from natural gas and renewable sources such as wind and solar, building charging networks for electric cars, developing lower-carbon biofuels that will not compete with crops for land.” He continues “…renewable sources will meet a growing share of rising energy demand, but the need for oil and gas will remain for decades to come. In Shell, as we shape our businesses to deliver more and cleaner energy we must also continue to invest responsibly in developing conventional oil and gas resources. This generates billions of dollars in revenue…..and provides the financial muscle to invest in cleaner forms of energy”.

He then goes on to talk about the potential of hydrogen “which could play a vital role in helping the move towards a lower-carbon world. Hydrogen can be extracted using the electricity generated by wind and solar power. It can then be stored, ready to be converted back to electricity with only one by-product, water.” A ship, the Suiso Frontier, launched in Japan in December 2019, “is expected to allow us to develop and demonstrate the technologies needed for a commercial-scale hydrogen supply chain by around 2030.” It is perhaps worth noting that Toyota, the major Japanese car company, has already made clear its choice of hydrogen as the fuel of the future. (Indeed, Shell itself is already involved with providing some hydrogen refuelling facilities on (Shell) forecourts in the UK, elsewhere in Europe and North America.)

Shell were clearly organising themselves for a world in which it was reasonable to predict that climate change would loom large and that decarbonisation would be important. Their take- over of British Gas and their investment in LNG from Australia bolster their claim to be more of a Gas company than an Oil company and there is also a certain logic to the hydrogen play which was highlighted by Chad Holliday. We shall just have to see whether these changes of emphasis will now be substantial enough to safeguard long-term survival in a newly altered world. But Shell is a massive and well-run company; it has been looking at, planning for and adapting to, agreed predictions for a long time.  My guess is that those predictions can be revised and the goals shifted to face an altered future –whenever that emerges.