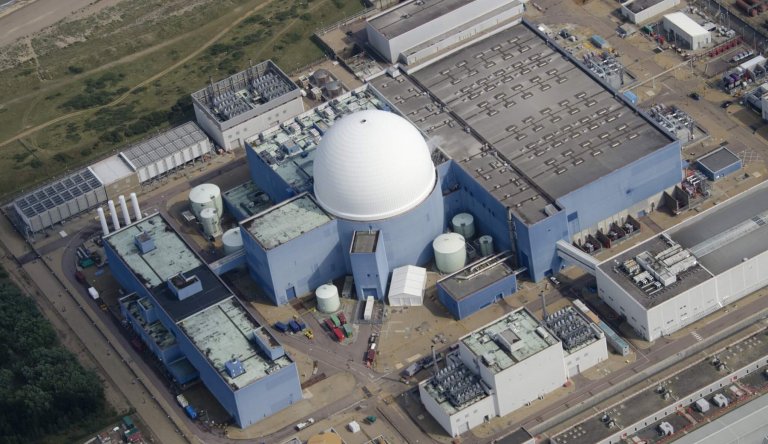 The Sizewell B station, due to close in the 2030s. Image: By John Fielding, via Wikimedia Commons

Sea level rise may consign the planned UK site for two large nuclear reactors to vanish beneath the waves.

Controversial plans by the French nuclear giant EDF to build two of its massive new reactors on the low-lying east coast of England are causing alarm: the shore is eroding and local people fear sea level rise could maroon the station on an island.

A newly published paper adds weight to the objections of two local government bodies, East Suffolk Council and Suffolk County Council, which have already lodged objections to EDF’s plans because they fear the proposed sea defences for the new station, Sizewell C, will be inadequate.

EDF, which is currently expecting the go-ahead to start building the station from the British government, says it has done its own expert assessment, had its calculations independently checked, and is satisfied that the coast is stable and the planned concrete sea defences will be adequate.

The argument is whether the coastal banks which prevent storm waves hitting this part of the coast will remain intact for the next 150 years – roughly the life of the station, taking into account 20 years of construction, 60 years of operation and then the time needed to decommission it.

The paper is the work of a structural engineer, Nick Scarr, a member of the Nuclear Consulting Group, which is an independent, non-profit virtual institute that provides expert research and analysis of nuclear issues.

As relevant, though, is his knowledge of the coastal waters of Suffolk, where he spends time sailing. He believes the coast is inherently unstable.

With sea level rise and storm surges, he says, the site will become an island with its defences eroded by the sea well before the station reaches the end of its active life, risking a catastrophic accident, which is why he wrote his report.

He told the Climate News Network: “Any sailor, or lifeboat crew, knows that East Coast banks need respect – they have dynamic patterns, and even the latest charts cannot be accurate for long.

“I was deeply concerned by EDF’s premise that there is micro-stability at the Sizewell site, which makes it suitable for new-build nuclear. It is true if you restrict analysis to recent historical data, but it is false if you look at longer-term data and evidence-based climate science predictions.

“Climate science not only tells us that storm surges have a higher median level to work from, but that they will also render the banks ineffective for mitigating wave power on the Sizewell foreshore (because of reduced friction, as the water depth is greater).”

The longer-term data Scarr mentions are not altogether reassuring. Less than 10 miles from the site are the remains of Dunwich, once a thriving medieval port that disappeared in 1338 because of coastal erosion and a huge storm.

shown in hydrographic charting, tells us clearly how unstable the offshore banks are over a longer time frame, and that is without sea level rise.”

“Any sailor, or lifeboat crew, knows that East Coast banks need respect – they have dynamic patterns, and even the latest charts cannot be accurate for long”

Sea level rise is expected to be up to a metre on this coast by the end of the century, but that is only part of the problem – the “once in a century” storm surges are expected to occur as often as once a year by 2050.

This is not the first time that ambitious plans by the government to build nuclear power stations on the British coast have been questioned. A proposed station at Dungeness in Kent, on England’s south-east coast,  has already been shelved because the existing station there is in danger from the sea.

The Suffolk site already has two stations. Sizewell A has been closed and is being decommissioned. The second, Sizewell B,  owned by EDF, has been operating since the early 1990s and is due to close some time in the 2030s.

The new reactors, together called Sizewell C, will be built further out to sea than A and B and will rely on an undersea ridge, a coralline crag, as a bastion against storm waves crashing into the station.

EDF’s contention that the site is safe is partly based on a report by engineers Mott Macdonald, compiled in 2014 and based on historical data, which says that this undersea ridge is stable and will continue to be a form of natural coastal defence.

However, East Suffolk and Suffolk County Councils, in their joint response to EDF’s consultation, make it clear that Sizewell C’s development has not in their view been shown to be able to be  protected from erosion or flood risk over the site’s life.

Scarr’s report goes further, concluding: “This threat to the Sizewell foreshore is clearly an untenable risk.”

One contentious issue on nuclear sites, including those at Sizewell, is the need for decades-long storage of large quantities of highly dangerous spent nuclear fuel in cooling ponds once it is removed from the reactors. Currently the UK has no such disposal route.

Asked about Starr’s report and the councils’ objections, EDF told the Network: “The design of the power station, including its sea defence and the raised platform it will be built on, will protect Sizewell C from flooding.”

It added: “Sizewell C will safely manage the spent fuel from the station on the site for its lifetime, or until a deep geological repository becomes available.

“Sizewell is located within a stable part of the Suffolk coastline between two hard points and the offshore bank of sediment, the Dunwich-Sizewell bank.  We have undertaken extensive studies of the coastline in developing our plans.

“We have performed a great deal of modelling to forecast potential future scenarios along the Sizewell coast, with and without Sizewell C, to fully assess the effect of the station on coastal processes. We then asked independent experts to critique the forecasts to provide the very best assessment of long-term coastal change.

“When built, the permanent sea defences would protect the power station from a 1 in 10,000-year storm event, including climate change and sea level rise. We’ve designed flexibility into our permanent coastal sea defence, meaning it could be raised during the lifetime of Sizewell C if needed.”

Another of EDF’s existing reactors, at Dungeness, which is built on a vast shingle bank, was taken offline seven years ago for five months while an emergency sea wall was built to prevent it being flooded.

For decades the defences of the twin reactors have had constantly to be reinforced because the shingle banks on which they stand are being eroded by the sea.

That station was designed more than 30 years ago, before scientists realised the dangers that sea level rise posed, and apparently without understanding how the shingle constantly moves.

Although it is due to shut later this decade it will still represent a serious danger to the public for another century until it can be safely decommissioned and demolished.

During that time millions of pounds will have to be spent making sure it is not overwhelmed by storms and sea level rise. – Climate News Network