Climate change and the Virus

On 1 April Greenbarrel opined  “Just as last year climate change raced up the agenda with 2050 seeming so close, now the corona virus makes July 2020 seem so far away, at the very limit of popular vision if the newspapers are to be believed.” Almost a month on, the journalists are beginning to realise that there will (eventually) be life beyond the virus. Advice from journalists about that future is now in plentiful supply.

At first blush, the omens are not brilliant; the Financial Times of 14 April tells us that Governments and world leaders have attention for only one crisis right now. Climate talks have already been delayed and new policy initiatives postponed. The convention centre that was set to host the UN climate talks in Glasgow in November (now postponed) has been converted into a hospital for coronavirus patients. The result is that there is a real risk that the pandemic will overshadow environmental concerns. The FT goes on to quote Glen Peters, the research director at the Center for International Climate Research in Oslo, as saying. “In the policy discussions for the next 6-12 months, climate is probably not going to be mentioned, it is going to be about coronavirus and economic recovery.” 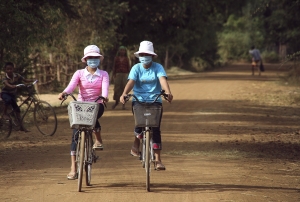 Image by Daniel Kirsch from Pixabay

But it is not all bad news: Piotr A. Kowalski and Aleksander Konior opined earlier in the month “Our team is using our data and air quality models to determine if increased air pollution is linked to far higher Covid-19 spread. If air pollution is turning out to be a big contributor to coronavirus spread and/or death rates, the epidemic may end up making people more willing to do something about dirty air and climate change.”

More interestingly, and perhaps more practically, the Global Wind Energy Council (GWEC) noted some potentially encouraging news for the wind market:  after Easter when the Spanish Government permitted work to resume in the industrial and construction sectors, Siemans Gamesa Renewable Energy  said that their production facilities had resumed normal activity and Vestas confirmed both that their generator production facility located in Viveiro restarted full production on 13 April and that their blade factory in Daimiel had nearly reached full utilisation rate. This is apparently a good sign because Spain is one of Europe’s largest wind manufacturing bases as well as the home for a number of major turbine producers.

So in the hypothetical post-virus world what has to change? It is one thing to say that climate change requires action now to avert a future global catastrophe. But what does that mean in practical terms? What exactly do we expect post-virus economic activity to look like? Apparently the resumed activities in the Spanish wind turbine factories are rather different from the way they were “before”. The tasks seem to be much the same, but the workers are now much further apart to respect “social distancing”. Is that really enough of a change if we are trying to adapt to a post-virus economic reality?

The short answer must be that there is a lot more speculation to come.