On Tuesday 3 March the more serious newspapers carried the story that the Government had decided that on-shore wind farms would be eligible to participate in future auctions for “contracts for difference” (CFDs).

What does that mean? Why is it news? CFDs are a market-based system that relies on auctions to deliver the cheapest price for a given quantity of electricity. This approach has been responsible for some recent dramatic falls in the price of electricity, mirroring the falls in the costs of the relevant technology. In October 2019 we reported the view of the IEA that in terms of the planet off-shore wind farms could in time be joining solar panels and on-shore wind farms to constitute a third renewable resource for producing cheap electricity.

But that is the global position: from the perspective of the UK, things look rather different. To start with, the UK was, and remains, the world leader in off-shore wind, reflecting the UK’s almost uniquely favourable position. But more importantly, pure politics has played its part. Many Tory MPs were opposed to on-shore wind farms on the grounds that they were “unsightly” and opposed by their constituents. Accordingly, in 2016 the then prime minister, David Cameron, partly perhaps for aesthetic reasons, but more probably to assuage the hostility of his MPs, decided that no subsidies would be paid to any on-shore wind farm bidding at an auction for electricity. The result was an abrupt drop in construction. 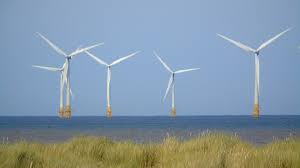 But a lot has changed since then as climate change has moved sharply up the agenda; the UK is legally committed to being carbon neutral by 2050 and equally is scheduled to chair the next round of global climate change talks in Glasgow in November this year. It no longer makes much sense to penalise on-shore wind across the board, not least because the Secretary of State, Alok Sharma, has made it clear that local communities will have an opportunity to make their position known. Indeed, the Government admits that, after the planners have had their say, most of the successful bids at the next CFD auctions are likely to be from wind farms located in Scotland.

According to the Government, eighty-six on-shore farms will be able to compete for the first time at these auctions, now scheduled for 2021, which means that extra wind farms could be up and running by 2025/6. It is perhaps worth remembering that the UK already has some two thousand four hundred on-shore wind farms, with the capacity to provide around ten percent of the UK’s current electricity requirement. But more electricity from renewable sources will be essential for a  “greener” future.

Needless to say, news of this decision was greeted with satisfaction by all the organisations working for a more positive line on climate change and the environment more generally. It may be that a more positive line in this area will indeed be one of the distinguishing features of a UK led by Boris. But maybe the explanation is more political. Could it be that Boris has noted the rising importance of the “Greens” all over the continent and decided that this constituency is one which is simply too important to  ignore. Time will tell.