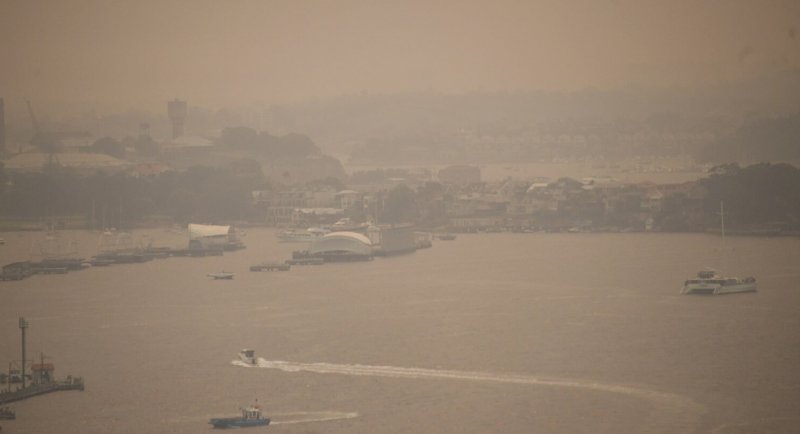 View through the haze from Sydney Harbour Bridge, 6 December, 2019. Image: By Sardaka, via Wikimedia Commons

The Australian inferno has yet to reach its worst, but already minds are seeking ways to reduce the bushfire horrors. Could batteries help next time?

With at least 27 human fatalities and a scarcely credible estimate by scientists that more than one billion animals have been killed nationwide by the unprecedented blazes  since September 2019, Australia’s bushfire horrors have stunned the world.

The climate crisis is contributing to the catastrophe, at least to its scale and intensity, whether or not it is its primary cause. And scientists revealed only this month that global heating is causing daily weather change.

But something else happened in Australia in 2019 which could point the way towards a fast route, not for Australia alone but globally, to renewable energy and a safer future.

In the state of South Australia the world’s biggest lithium-ion battery – 129MWh, able to power 30,000 homes for an hour during a blackout – was switched on just 60 days after the contract to build it was signed.

So ways of cutting the use of fossil fuels and reducing their contribution to climate heating, now clearly implicated in Australia’s catastrophe, are within reach.

The battery was commissioned in order to bring greater reliability and stability to the state’s electricity grid, preventing blackouts, improving reliability across the network and helping to even out price spikes.

The state’s efforts to increase its proportion of renewable energy had previously been hampered by freak weather which caused outages, which in turn sparked a political brawl over energy policy. The federal government blamed the supply failures on the use of renewable technologies.

The state premier challenged the technology entrepreneur Elon Musk,  who replied by saying he would build a massive battery within 100 days of signing the deal. He managed it with 40 days to spare.

His approach − a familiar one in the renewable energy world − was to charge the battery packs when excess power was available and the cost of production very low, and then discharge them when the cost of power production rose.

The world is becoming increasingly reliant on battery power, largely because of the need to reduce carbon in the transport sector; almost 60% of new cars sold in Norway during March 2019 were entirely electric-powered. A recent World Economic Forum (WEF) report expects global battery demand to increase by more than 19 times its current levels in the next decade.

Batteries have historically been a dirty but convenient product, requiring the mining of metals such as nickel and zinc, yet considered disposable; landfills are strewn with these hazardous toxins, with more arriving every day. According to the US Environmental Protection Agency (EPA), each year Americans throw away more than three billion batteries – 180,000 tons of waste.

Yet the WEF report projects that new generation batteries could not only enable 30% of the required reductions in carbon emissions in the transport and power sectors, providing access to electricity to 600 million people who currently have no access; they will also create 10 million safe and sustainable jobs around the world.

Batteries will probably play a large part in future energy supply systems; in 2018, South Australia invested $100 million in a scheme to encourage householders to fit batteries to their solar systems, enabling them to use their own power on site rather than exporting it to the grid. This helps to reduce demand at peak times.

Electric cars are not the only part of the transportation sector that will be in need of batteries. A number of companies are currently working on electric-powered commercial aircraft designs, and Norway is working on battery technology for shipping, with an all-electric passenger vessel already operating.

The Rapid Transition Alliance (RTA) is a UK-based organisation which argues that humankind must undertake “widespread behaviour change to sustainable lifestyles . . . to live within planetary ecological boundaries and to limit global warming to below 1.5°C”, with the slogan “Evidence-based hope for a warming world”.

It believes there is evidence that batteries can offer hope for Australia  and other countries facing similar lethal threats − provided they absorb several crucial lessons.

First, it says, technological leaps need both the flair of individual effort and the clout of institutional backing if they are to work at scale.

Then behavioural change must be practical and economically viable, because only a small minority of people will ever change for green reasons alone. Simply switching to electricity as a fuel source is not enough: to hit climate targets and maintain a habitable world, there needs to be an absolute reduction in energy consumption.

And finally, as batteries increasingly form part of the energy infrastructure, safeguards must be put in place around the mining involved in obtaining the minerals needed to make them, to ensure that poorer communities in the global South do not pay the price for cutting carbon emissions in richer countries. − Climate News Network

Alex Kirby is a former BBC journalist and environment correspondent. He now works with universities, charities and international agencies to improve their media skills, and with journalists in the developing world keen to specialise in environmental reporting.