Recently Easyjet announced that they will start straight away to “off-set” the carbon emissions resulting from their flights, a decision which the airline expects will cost around £25 million in the next financial year. This was welcomed with favourable articles in both the mainstream and the specialised press and rightly so. Easyjet are one of the UK’s largest airlines. They actually carry more passengers than BA but over a shorter average distance.

There has also been talk of flights being “Carbon neutral”. This is not about off-set at all. It either means that the plane produces no carbon at all or that all the carbon produced is absorbed. There may be technologies out there which can help with this, like using biofuel as a replacement for jet fuel or switching to electric engines for planes, but both these ideas are still experimental and a long way from commercial availability today. 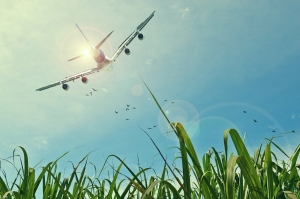 Image by ThePixelman from Pixabay

Given these technical obstacles to reducing emissions, off-setting them looks attractive. The idea is simple:- a company produces emissions in a rich country and offsets them by counterbalancing activity in a poor country, a sort of credit transfer operation. This is not a new or particularly revolutionary idea. Off-setting typically comes in two forms: the planting of off-setting agricultural products and support for electricity generation from non-fossil fuel sources, when the resulting electricity is a substitute for electricity from fossil fuel sources. There are already a number of examples of e.g. trees being planted in Africa to offset activities in traditionally carbon intensive industries like aviation. Equally there are examples of electricity generation from solar panels or a wind farm.

But there are two sorts of problems with offset, the first is with the aims of the offset project itself.     It is not enough to provide support for non- fossil fuelled electricity generation, to count as genuinely offset the new electricity has to replace existing fossil fuel capacity and its emissions. All too often the new non-fossil fuel capacity turns out to be an addition rather than a substitute. Equally, it will take a long time for trees planted as saplings to actually absorb the carbon emissions which remain in the atmosphere; and that ignores the chances of the trees being cut down and burnt at some unspecified time in the future.The second set of problems revolve around effective monitoring of carbon offset projects which is notoriously difficult. One estimate is that more than four out of five projects fail to achieve their objective of reducing emissions.

So what to think? This seems to be a classic case: should one see the glass as half empty or half full?  A half empty view was forcefully expressed in a letter published in the Financial Times of 6 December which stated “a Fund that seeks to ……use company offset gestures as a proxy is not reducing carbon or advancing clean energy development, but simply responding to public opinion it deems important to its reputation and its assumed impact on market returns, valuation and risk”. A glass half full view might agree with Easyjet’s acknowledgement that offsetting is essentially an interim measure, but nonetheless praise the company for being the first of its peers to be prepared to take action in what looks like a very troubled planetary environment of which we will hear much more.