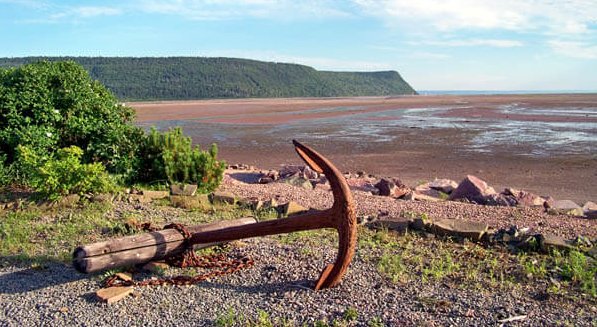 Follow the anchor down: The seabed may be the right place for carbon. Image: By Larry from Charlottetown, PEI, Canada, via Wikimedia Commons

The Blue Planet hasn’t been considered as a solution to the climate crisis. Three scientists advocate a sea change in global thinking: seabed carbon storage.

Climate scientists say seabed carbon storage could be a new ally to help reduce greenhouse gas emissions by a volume greater than all the carbon dioxide pumped into the atmosphere from the planet’s coal-burning power stations.

It is the biggest ally possible: the 70% of the globe covered by ocean.

In a detailed argument in the journal Science, Ove Hoegh-Guldberg of the University of Queensland, Eliza Northrop of the World Resources Institute in Washington DC and Jane Lubchenco of Oregon State University outline five areas of action that could mitigate potentially calamitous climate change driven by profligate use of fossil fuels.

These include renewable energy, shipping and transport, protection of marine and coastal ecosystems, fisheries and aquaculture and – perhaps in future – carbon storage on the sea bed.

“Make no mistake: these actions are ambitious, but we argue they are necessary, could pay major dividends towards closing the emissions gap in coming decades, and achieve other co-benefits along the way”, they write.

“For far too long, the ocean has been mostly absent from policy discussions about reducing carbon emissions and meeting the challenges of climate change”

The argument was deliberately timed to coincide with a major new report by the Intergovernmental Panel on Climate Change on the oceans and the cryosphere.

If the world’s nations pursue ocean policy ambitions in the right way, they could reduce global greenhouse gas emissions by up to 4 billion tonnes of CO2 equivalent by 2030 and up to 11 billion by 2050.

And this could tot up to 21% of the reductions required in 2050 to limit warming to the declared 1.5°C target favoured at the Paris climate summit in 2015, and up to a fourth of all emissions for the formal 2°C target identified in the agreement.

“Reductions of this magnitude are larger than the annual emissions from all current coal-fired power plants worldwide,” they argue.

The first step is to set clear national targets for getting renewable energy from the restless seas, in terms of offshore wind, tidal and wave energy,  by 2030 and then by 2050.

Then the trio want nations to think about ways to reduce or eliminate carbon from the world’s shipping fleets. That means alternative fuels and a revolution in shore-based supply chains. Fuel efficiency in existing technologies could be improved, and hybrid power systems – including fuel cells and battery technologies – should be explored.

And, they point out, the sea itself is a carbon consumer. Mangrove swamps, seagrass meadows and salt marshes could be considered as “blue carbon ecosystems” in the way that terrestrial forests are considered “sinks” for atmospheric carbon.

These coastal and submarine “forests” make up only1.5% of the area of the land-based forests and woodlands, but their loss and degradation are equivalent to 8.4% of carbon emissions from terrestrial forests now being destroyed by human intrusion. So it would pay to restore and protect such marine habitats.

There would be other benefits: harvested seaweed could be turned into food, cattle feed, fertiliser, biofuels and bioplastics. Some seaweeds could help in even more dramatic ways.

Experiments with a red alga called Asparagopsis taxiformis, they say, “can reduce methane emissions from ruminants by up to 99% when constituting only 2% of the feed, and several other common species show potential methane reductions of 33 to 50%.”

The scientists urge a diet shift towards fish and seafood in pursuit of sustainable low-carbon protein; they also want to see the fishing industry worldwide pursue lower emissions while optimising the sustainable global catch.

“Such large-scale shifts in food policy and behaviour are daunting,” they concede. But there would be considerable climate benefits.

And, they admit, there are “considerable challenges” to the idea that carbon dioxide captured at source could be safely and cheaply stored on the seabed for many thousands of years. But they say “the theoretical potential” is very high.

“For far too long, the ocean has been mostly absent from policy discussions about reducing carbon emissions and meeting the challenges of climate change,” they conclude.