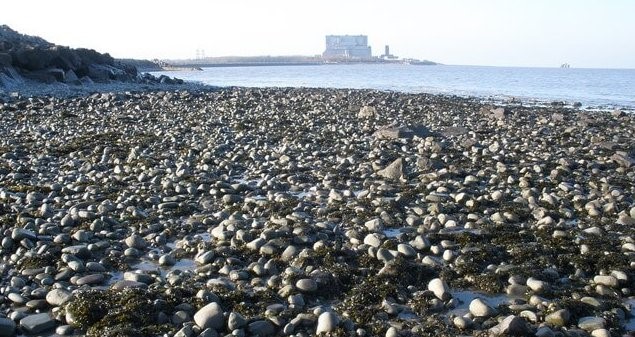 Looking towards Hinkley Point, where a third reactor is being built. Image: By Roger Cornfoot, via Wikimedia Commons

With new plants costing from five to ten times more than renewable options, and  Finding a way to head off the galloping climate crisis, although it’s taxing the world’s best brains, leaves one clear and inescapable conclusion, reiterated not only by researchers but acknowledged implicitly by the industry: nuclear cannot help.

Last week the French builders of the nuclear reactors being built in the United Kingdom announced a startling rise in construction costs. The news came on the day a report was published which said nuclear generation worldwide is now hopelessly uncompetitive in cost compared with renewable power.

The World Nuclear Industry Status Report 2019 also stresses that as far as climate change is concerned nuclear power has another huge disadvantage. Wind and solar power stations take only months to build before they produce power, so they quickly start to displace fossil fuels and save emissions of carbon dioxide.

Nuclear reactors, on the other hand, take at least five years to build − and very often more than a decade − and so the fossil fuel plants they are designed to replace continue to pump out greenhouse gases. With the need to cut carbon emissions increasingly urgent, this makes nuclear power the wrong solution to climate change, the report says.

The announcement by the French nuclear giant Électricité de France (EDF) of the rise in costs of the twin reactors being built at Hinkley Point C in the West of England put the cost of construction at up to £22.5 billion (US$27.9bn) an increase of up to £2.9bn ($3.6bn) from its last estimate in 2017.

“Nuclear new-build costs many times more per kilowatt hour, so it buys many times less climate solution per dollar”

With the construction of the station still in its initial stages, costs are expected to rise further before the first power is generated in late 2025 – even if there are no further delays.

Two similar pressurised water reactors close to completion in France and Finland have taken more than twice as long to construct as originally estimated and are still not producing power. Both projects have recently announced yet more delays.

The 2019 status report, produced by a group of independent energy consultants and academics, makes grim reading for the nuclear industry because it compares the cost of producing electricity from renewables – particularly wind and solar – with nuclear. It says nuclear now costs between five and ten times as much as solar and wind power.

The report says: “Nuclear new-build thus costs many times more per kilowatt hour, so it buys many times less climate solution per dollar, than these major low-carbon competitors. That reality could usefully guide policy and investment decisions if the objective is to save money or the climate or both.”

This gap is widening as nuclear costs keep rising and renewable costs falling. The report quotes the International Energy Agency which says: “Solar PV costs fell by 65 percent between 2012 and 2017, and are projected to fall by a further 50% by 2040; onshore wind costs fell by 15% over the same period and are projected to fall by another 10–20% to 2040.”

But the report also makes clear that it is not just in new build that renewables are a much better option than nuclear in combating climate change.

In many nuclear countries, especially the US, the largest nuclear energy producer, new renewables now compete with existing nuclear plants. If the money spent on operating expensive nuclear plants were invested instead in cheaper renewables, or in energy efficiency projects, then that would displace more fossil fuel generation than keeping nuclear plants running.

The report catalogues the dismal record of delays in nuclear new build across the world. At the beginning of 2018, 15 reactors were scheduled for startup during the year; seven of these made it, plus two that were expected in 2019; of these nine startups, seven were in China and two in Russia. Of the 13 reactors scheduled to start up in 2019, four have already been postponed to 2020.

The problem for the industry is that the capital cost of new stations is so great that outside totalitarian regimes the finance cannot be found without massive subsidies from the taxpayer or levies on electricity consumers.

Even in the UK, where the government has enthusiastically endorsed new nuclear power station projects, most planned projects for new stations have been abandoned.

Even before the latest cost escalation for Hinkley Point was announced, the Nuclear Status report was casting doubt that EDF’s follow-on project for another giant nuclear station on the UK’s east coast, Sizewell C, was likely to come to fruition.

The report says: “Given the problems EDF is having financing Hinkley, this makes the Sizewell project appear implausible.

“Over the past decade the extraordinary cost of the UK’s proposed nuclear power program has become apparent to a wider academic community and public bodies. Even when the Government was willing to invest directly into the project, nuclear costs were prohibitive.” − Climate News Network