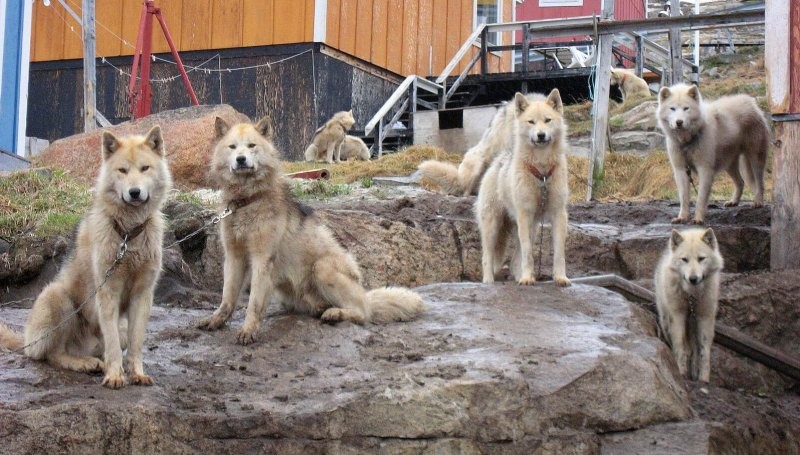 Greenlanders worry about what climate change will do to their dogs. Image: By Kim Hansen, via Wikimedia Commons

The climate crisis is part of daily life near the North Pole for most Greenlanders, with 75% saying they have felt it themselves.

Most Greenlanders, those who live in the High Arctic, need no persuading that the climate emergency is real enough: three-quarters of them say they’ve experienced it.

Amid a flurry of scientific reports and dispatches by journalists, the world should know by now about the speed of the ice melt going on in the Arctic and the grave consequences it’s likely to have for the rest of the planet.

What is often less well-known is how people in this vast region feel about the dramatic way that climate change is altering their environment and way of life.

A recently published report on Greenland by the Denmark-based Kraks Fond Institute for Urban Economic Research, the University of Copenhagen and others attempts to provide an answer.

Not surprisingly, given the record high temperatures of recent years in Greenland and elsewhere in the Arctic, almost all those surveyed – 92% – believe climate change is happening, with more than half attributing such developments to human activities.

A substantial majority – 76% – say they have personally experienced the effects of climate change; a large segment of those surveyed say the warming they’re witnessing will harm people in present and future generations and adversely impact plant and animal species – especially dogs used for sledging.

More than 640 residents of Greenland – 1.5% of the population of what is the world’s biggest island – participated in the report. Questioned on the level of anxiety they feel about the changes happening around them, those surveyed said they were most concerned about increasingly unpredictable weather patterns, the loss and thinning of sea ice, and the melting of permafrost.

Greenland, along with many other areas of the Arctic, has a particularly high incidence of mental health problems, along with alcohol, drug and other dependence issues.

Suicide rates, especially among the young, are well above those in other regions. In Arctic parts of northern Canada the incidence of suicide among the Inuit and other indigenous people is three times the national average.

“Those surveyed said they were most concerned about increasingly unpredictable weather patterns, the loss and thinning of sea ice, and the melting of permafrost”

A lack of jobs and low levels of education are said to be contributing to what is being described as a suicide crisis across the Arctic. Changing settlement patterns, community displacement due to climate change and a high incidence of TB and other diseases are also believed to be factors.

Various initiatives are now under way in an effort to tackle the problem.

Fishing is Greenland’s biggest industry, while hunting is a traditional activity, with much of the local diet dependent on seal meat and other wild food. Thinning ice means that hunting expeditions by sled are often dangerous.

A majority questioned in the survey said climate change will harm hunting, while about half say fishing will also be affected by warming temperatures.

Overall more than 40% of residents thought climate change a bad thing, while only 11% said it was beneficial, with 46% still undecided on whether it would be good or bad.

Despite high unemployment rates in Greenland, a majority of those surveyed said they wanted to protect the environment, even if it was at the expense of jobs and economic growth.

Last month President Trump surprised the world by suggesting that the US would be interested in buying Greenland – he said the island was important for US security and had considerable economic potential.

Kieran Cooke, a founding editor of Climate News Network, is a former foreign correspondent for the BBC and Financial Times. He now focuses on environmental