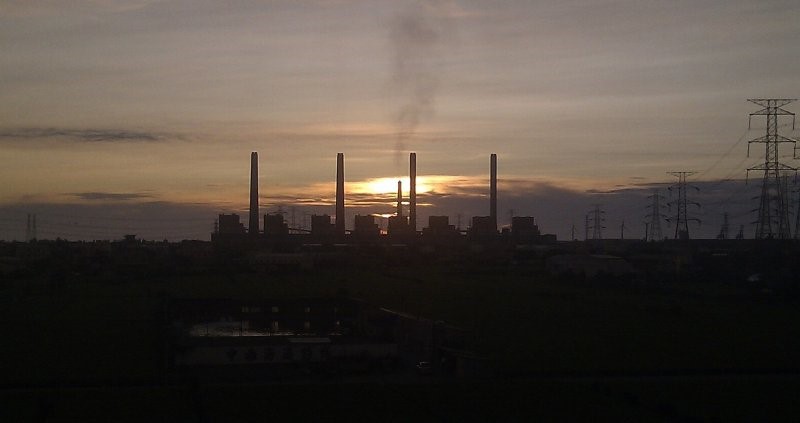 The coal-burning power plant at Taichung in Taiwan. Image: By Ellery, via Wikimedia Commons

You need energy to develop. You also need water. So coal-burning generators that need water for cooling invite trouble.

Economic development in Asia – hugely dependent on electricity from coal-burning generators – could be cramped by climate change.

That is because global heating could begin to constrain the supplies of water needed to cool thermal power installations.

So the generators that fuel global heating and the climate emergency by releasing huge quantities of greenhouse gases into the planetary atmosphere could create conditions in which nations could begin to experience power shortages made more likely by the extra carbon dioxide pouring from their new power station chimneys.

Power plants in Asia already account for 37% of global electricity generation and 41% of carbon dioxide emissions because 64% of this energy is already generated from coal, according to a new study in the journal Energy and Environmental Science.

And about 490 gigawatts of new coal-fired plant could be in operation by 2030 in China, south-east Asia, Mongolia and parts of India.

“One of the impacts of climate change is that the weather is changing, which leads to more extreme events – more torrential downpours and more droughts,” said Jeffrey Bielicki, a civil engineer at the University of Ohio in the US, one of the authors.

He and European colleagues base their conclusions on simulations of what could happen to regional climate under conditions of rises in planetary average temperature of 1.5°C, 2°C and 3°C above the long-term average for most of human history.

The first is the ambition agreed by 195 nations in Paris in 2015. The second is the upper limit that nations vowed to keep global temperatures to and the third is – so far – the temperature the planet is likely to reach by 2100 under present emissions scenarios.

That is simply because at a time when nations should already be closing fossil fuel power plants, more are being built. Global average temperatures in the last century have already risen by around 1°C.

The simulations found, inevitably, that more coal-fired generation would step up demand for water precisely as climate shifts due to ever-increasing levels of greenhouse gases in the atmosphere would tend to reduce the reliability of water supply. Difficult decisions lie ahead.

“We know that coal power contributes significantly to global warming – more than almost any other electricity source – and what this study shows is that coal power development can expect reduced reliability in many locations across Asia,” said Edward Byers, of the energy programme of the International Institute for Applied Systems Analysis in Austria.

And Dr Bielicki said: “There is often a perceived tension between developing your economy and protecting the environment.

“Some of the results of this study are saying ‘Hey, we expect you’re going to run into problems, so you should selectively change your plans, but also thin out your existing power plants because, as you’re adding new power plants, you’re creating more competition for water.’

“Your economy needs water but your ecosystems and people need water too.” – Climate News Network