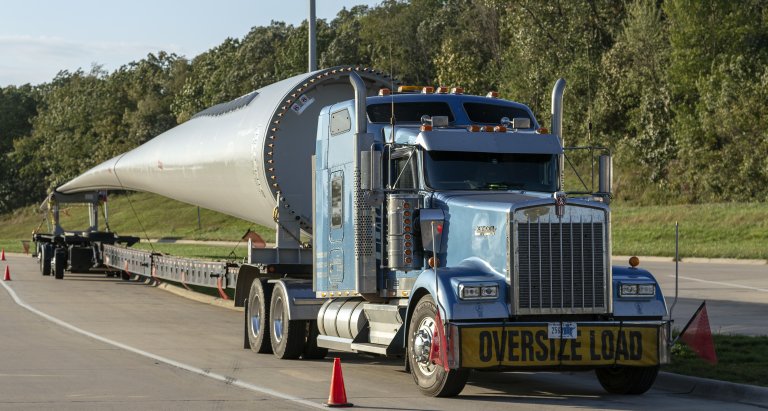 Turbine blades have grown ever longer to reach their 107-metre maximum today. Image: By Acroterion, via Wikimedia Commons

Rapid progress in the solar and wind industries mean they are outcompeting fossil fuels in key markets − a renewable revolution.

There’s a renewable revolution under way: the cost of wind and solar power is now undercutting fossil fuels across the world.

One recent week brought news of the world’s longest turbine blade, a monster capable of producing enough electricity on its own to power a small town. The fact that solar power in combination with batteries is now a cheaper way than gas to produce electricity in the United States is cheering news for those battling against climate change.

The single blade, 107 metres long, was produced at a factory in Cherbourg in France, the country most reliant on nuclear power. After tests the blade will power a 12-megawatt turbine, the largest in the world, situated off the French coast, and capable on its own of powering thousands of homes throughout its 20-year design life.

In the US the states of California and Arizona, where sunshine is plentiful, have solar plants incorporating battery storage that are now a better investment than gas over a 30-year period – even though the US has some of the cheapest gas in the world, because of fracking.

“This is an amazing achievement, not only for LM Wind Power and GE Renewable Energy, but for the entire wind industry”

The key problem for solar power during its years of development has been that when the sun does not shine other generation systems have to be used. Advances in battery technology and in molten salt and other heat storage methods over the last 12 months mean that electricity can now be produced from solar power at any time of the day or night, obtaining the highest revenue returns at peak times.

American companies are now claiming that they can out-compete gas in any part of the country to produce peak-time electricity.

Across the world most new large solar farm developments are including energy storage facilities in their initial construction, either batteries, heat storage or electrolysis (passing electricity through water) to produce hydrogen.

In Scotland, surplus wind and wave power is being used to produce hydrogen for a number of schemes, including powering buses and ferries. But the hydrogen can also be sold to make more electricity at peak times, or to be fed into gas mains to top up natural gas supplies and reduce carbon emissions.

These developments in the US and France follow news that electricity produced by solar power is now about one-third cheaper than from coal plants in India.

This is forcing Indian coal plants to sell their electricity at lower than cost price, an unsustainable practice which threatens their future. Many coal plants are considered unviable even in a country desperate to increase energy production because of a national supply shortfall.

With more than 10 million people now employed in renewable energy industries worldwide, the sector is beginning to develop real political clout. This, plus the Extinction Rebellion protestors who have been causing disruption in London and other British cities and elsewhere, and the now worldwide schoolchildren’s strikes for the climate, is putting politicians under real pressure to change policies.

So far this does not appear to have affected President Trump and the Republican Party in the US, which still relies heavily on the fossil fuel industry for campaign donations, but many of the country’s coal plants are closing simply because they can no longer compete with cheap gas, wind and solar energy.

The rapid development of offshore wind, spurred by ever-larger turbines which have both increased production and seen prices tumble, has changed the prospects of many coastal countries in their fight to reduce carbon emissions. Europe could now produce all its electricity from offshore wind.

The latest development by LM Wind Power in France shows how fast the industry is developing. It is only two years ago that the company was boasting about its eight-megawatt turbine blades, now able to generate half as much power again.

Lukasz Cejrowski, project director for the 107m blade at LM Wind Power, said: “The LM 107.0 P is one of the biggest single components ever built. This is an amazing achievement, not only for LM Wind Power and GE Renewable Energy, but for the entire wind industry.”