In the summer, the press gave prominence to the Mayor of London’s announcement that in 2019 London would see the creationof the largest double-decker electric bus fleet in Europeas 68 new electric double-deckers came into service, thus increasing the number of electric buses ten-fold.

But, in a sense, these clean buses are only a means to the end of cleaner air for all Londoners to breathe. More recent press notices have tended to concentrate on and emphasise air quality improvements already achieved and to promise more of the same.

The answer to current pollution levels seems to be a lot more low emission buses being deployed in a more strategic way in Low Emission Bus Zones, covering the worst air quality hotspots outside central London. The first two of these zones were introduced in 2017 in the notorious environmental black spots of Putney High Street and Brixton Road. The result has been a spectacular reduction in pollution: some 99 per cent in the case of Putney and eighty-five per cent in Brixton. As a result five further Low Emission Bus Zones have just been introducedand the plan is for a further five zones before the end of 2019. 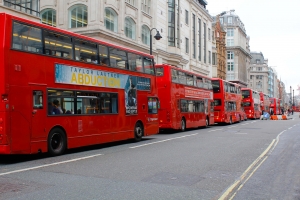 The London bus network now carries 2.3 billion passengers a year – more than the rest of England put together. The total bus fleet currently operating in London is around 9,500 vehicles and features a number of different technologies, including hybrid-diesel. The plan is to have over 3,000 Ultra Low Emission buses operating in Central London by 2019.

These buses will be capable of meeting the latestEuro VI standard in diesel engines, reducing emissions of NOx by up to 95 per cent compared to the previous generation of buses. Since 2014 new buses have been supplied with these Ultra Low Emission engines, and they continue to get introduced across London at a rate of between 700 and 1,000 buses a year. From 2018, all new double-deck buses entering the fleet will be diesel-hybrids meeting Euro VI emissions standards.

However the bus stock will still have a very significant component of older buses which will never meet modern-day standards. Accordingly, there are plans to retro-fitaround 5,000 buses so that they too meet the Euro VI emissions standard as quicklyas possible. This often means replacing a bus’s exhaust system, although in some cases it may require the engine to be replaced.

Electric and hydrogen Zero Emission buses are both already running in London, but the authorities are planning to step up the numbers with the introduction of over 250 Zero Emission single- deck buses by 2020. All these vehicles will be zero-emission at the tailpipe. They will be a mixture of electric buses and also hydrogen buses which distinctively emit nothing but water.

Wireless-charging technology is also being trialled: a small number of hybrid buses have been fitted with technology enabling on-board batteries to receive a charge boost on plates fitted at bus stands at either end of the route. This should enable the buses to operate in pure electric mode for a significant period of the time they are in passenger service. The trial uses inductive charging technology allowing the buses to top up their batteries without needing to be physically plugged in. The buses have a diesel engine that will be used when battery power is depleted. But it is anticipated that this will only be a small amount of the time, meaning tail pipe emissions on these vehicles are greatly reduced.

Theintroduction and expansion of these technologies will play a key role in improving air quality in London. Of course there is a cost to all this, buttotal additionalcost is hard to estimate accurately as new buses will be replacing older buses bought some years ago. Furthermore, pricing the “cost” of newer technology is complicated by the tendency of prices to progressively reflect economies of scale. And who is to price the number of premature deaths avoided as air quality improves?