When writing about ASX-listed Carnegie Clean Energy last February we reported that: “Just over a year ago at an AGM on 2 December 2016, Carnegie Wave Power (CWP) shareholders voted overwhelmingly to change the company name to Carnegie Clean Energy (CCE) in recognition of Carnegie’s broadening focus on clean energy.”

What we didn’t say was that the scheme of diversification into other clean tech areas, was perhaps driven by the management’s acceptance that they had failed to bring their flagship CETO wave power project into commercial success, despite hefty investment from Australian government aid and grants. There was a stream of losses and the realisation that the Board must do something else. Diversification seemed like the answer.

Now, investors who have read the final results statement for fiscal 2018 which was released in September, must have a weary sense of “here we go again.” The highlight of the statement was that the company had agreed to sell its battery storage and micro grid business (which contributed the lion’s share of revenue in fiscal 2018) to a large ASX listed clean tech group, as part of a merger.

Carnegie reported that losses, that appeared seemingly endemic in the company’s accounts, continued to mount in the diversification away from wave power. So maybe diversification was not working and, again, something else needed to be done.

To recap: Ten years of investment in the wave power technology had resulted in the successful deployment and operated the world’s first grid connected array of three CETO 5 units at the Australian Navy base at Garden Island in Western Australia.

An eleventh year (in 2017/2018) of follow-up investment from this pre-commercial project led to the next generation of CETO  technology, the much-improved CETO 6 unit. Building it involved A$27million being allocated to Carnegie’s Albany Wave Energy Project. Of this A$15.75m came from the Western Australian government and the rest from the semi-government agency, the Australian Renewable Energy Agency (ARENA). 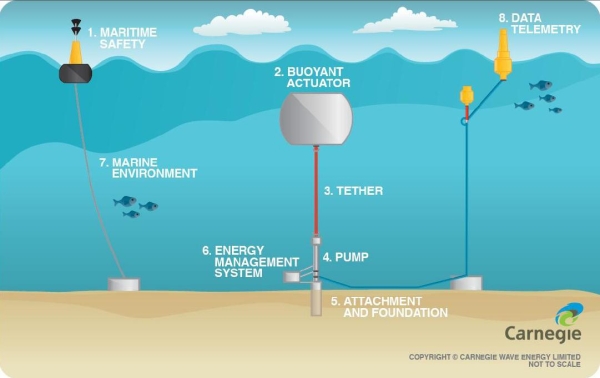 Success of the initial project phase could be followed by a 20MW expansion which could in turn lead to a 100MW CETO wave farm at the site in Albany. This would certainly mean commercialisation, but not for a while yet, perhaps not for a long while — if ever.

The new assets which Carnegie acquired or established in the 2016/2017/2018 period in the diversification, included the 10MW Northam Solar Farm, the 5MW Kalbarri microgrid and other microgrid sites. These are being subsumed into the ASX-listed Tag Pacific group in a all paper merger deal. Under the deal Carnegie will receive 58.5m shares in Tag in exchange for the Carnegie subsidiary Energy Made Clean (EMC) which owns the assets. EMC will then be merged with Tag and renamed MPower.

The shares, distributed to Carnegie shareholders will represent a 32 per cent interest in the new company. The merged entity will apparently start the 2019 financial year with a committed order book of about A$20m.What this will mean for Carnegie minority shareholders is not clear.

According to Carnegie managing director Mike Ottaviano, EMC accounted for almost all of the company’s half year 2017/2018 revenue. The managing director of EMC has been made redundant with a termination payment of A$378,000. Another non-executive director has also been made redundant. Carnegie has said its primary operations will again be its wave power technology. What it is going to use as money to fund development of the technologies is not immediately obvious.

The company said that despite record revenues of A$9.8m for the group (on a consolidated basis) the loss for the 12 months to 30 June 2018 rose to A$64m from the prior period of A$14m. This was primarily due to the non-cash impairment by CETO of A$35m and write downs of EMC’s good will by A$9m. The balance also includes expenses of A$12m and other bits and bobs. Oh, what a fine mess it all look like.

When we wrote about the company in February the share price was 3.8 cents for a market cap of £104.25m. The share price of the now A$26 market cap company has crashed to 1 cent against a 52-week high of 5 cents.