In our reporting on the renewable/alternative energy sector we have come across a number of start-up groups that have raised what seemed like large amounts of money. These funds were then spent establishing the commercial possibilities of their innovative – and sometimes unproven – products; and overcoming regulatory hurdles.

This meant that revenues stayed low or even non-existent and losses rose with the result that investors lost confidence, new capital became difficult to find and groups went into suspension to re-order their affairs. Flowgroup and Graphene Nanochem are recent cases in point.

Not so long ago, Ceres Power looked like facing the same problem. But, as the recent announcement of a landmark strategic collaboration with China’s Weichai Power firmly demonstrates, Ceres has re-invented itself to the extent that the  claim that its key SteelCell product is a world leader looks justified.

Ceres is hardly a start-up group. The company was borne out of Imperial College, London, through the invention of the SteelCell by lithium battery and fuel cell pioneer Professor Brian Steele. Some ten years ago Ceres Power concentrated on using the fuel cell to design and make what they thought were ground- breaking combined heat and power boilers (CHP) for homes and small to medium sized businesses (SMEs).

This business model did not work and in 2014 the company announced it would change direction. The new strategy is to form partnerships with large Original Equipment Manufacturers (OEMs) to whom it could sell its SteelCell.

This new game plan took some time to get going, but in the past two years five such partnerships have been agreed. They include big vehicle makers like Nissan and Honda. Also, there is a consortium led by US group Cummins, and backed by the US Department of Energy, to develop a large (5-10kW) system to power data centres and other commercial units. Ceres has been developing these partnerships at a time when its financials looked like those described in paragraph one above. 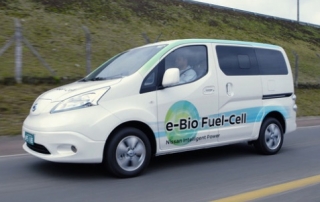 Ethanol is one of the fuels used in fuell cell cars

For example, when we wrote about Ceres Power last October we said the company reported a significant increase in revenue for the year ending 30 June 2017 at £4.1 million against £1.7m for 2016, but they still registered a loss in earnings before interest, tax, depreciation and amortisation (EBITDA) of £10.3m (2016: £11.5m.)

House broker Berenberg said in a note issued on 4 October last year: “We do not believe that the near-term financials are central to the real investment case at Ceres.”

It looks like the broker was right, in that the agreement with Weichai means Ceres will get out of the financial straitjacket it has been in. But it also is a break-through in other respects. Commenting on the deal Phil Caldwell, CEO of Ceres said:”We are delighted to be working with Weichai in a partnership that provides access to the Chinese market for our SteelCell®  technology and also scale-up capital for our growth in the UK.”

The agreement shows that the SteelCell was the right horse to back, so to speak. It is a solid oxide fuel cell, which is one of two types of fuel cell with a solid electrolyte (SOFC) that are near commerciality, the other being the proton exchange membrane (PEM). Cells with liquid electrolytes are harder to manage. Of the two the SOFC is slightly more efficient (~ 60 per cent).

Weichai Power is one of the leading automobile and equipment manufacturing companies in China, with a market cap of US$10billion. The  agreement will see Ceres Power and Weichai jointly develop a number of applications for the SteelCell in the Chinese market across commercial vehicles, stationary power and – in the first instance—a range extender for the electric bus market.

Weichai currently produces over 600,000 engines per year and sells 30,000 buses per year. Ceres now has access to the world’s fastest growing fuel cell market and fast-growing electric vehicle market in China, a sector being driven by state support from the Chinese government.

Ceres says the agreement has the potential to deliver significant staged revenues through engineering services and technology transfer, licence and royalty payment and a longer-term share in the profits from a proposed manufacturing joint venture.

As for scaling up capital, the deal includes a potential initial £17m equity investment by Weichai in Ceres and a potential further equity investment of £23.2m, which is to be triggered on the signature of  further commercial agreements before 30 November 2018. Shares in the £145.33m market cap company stood at 14.30 pence last evening with a 52-week high of 15p and a low of 9.30p.