Clean energy can provide 100% of electricity 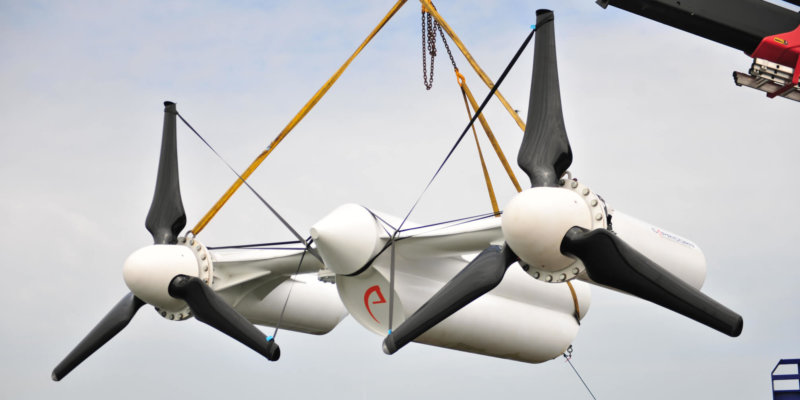 Marine turbines: Renewable energy can provide  electricity for all: Image: GreenWikiGuys, via Wikimedia

All the electricity the world needs can come from clean energy, reliably and throughout the year, British researchers say, at any time of day or night.

Imagine a world with so much renewable, clean energy that it could provide all the electricity society needed, reliably and without any interruption, round the clock. If UK researchers are correct, you shouldn’t need to imagine it. It could soon be a reality.

A report by the Centre for Alternative Technology (CAT) says clean energy could now meet all our electricity needs, using only existing technology, at all times of the day, and all year round. The report draws on “scenarios” designed to meet the targets of the Paris Agreement, developed at the global, regional, national and sub-national scales.

Scenarios, in the sense used in the report, are emissions reduction models describing possible futures in which society has managed to reduce its emissions of greenhouse gases.

The report’s insistence that renewables can power the world is a challenge to earlier studies which have suggested that the obstacles to a fossil fuel-free economy remain for the moment insurmountable.

The researchers assessed and mapped more than 130 of these scenarios, including 18 in-depth case studies. They draw on cutting-edge modelling work for a net zero world, with deep decarbonisation, and for up to 100% renewable energy. Their geographical range extends from East Africa to the US west coast, and from southern Asia to northern Europe.

“Tackling climate change and creating a fairer future for everyone is no longer a technological challenge, it’s a challenge of will, of ambition, and of vision”

“This summer the climate crisis became horrifically real for people experiencing record weather extremes from the United States to Japan and Bangladesh. We have produced the largest survey yet of scenarios for switching to climate-friendly energy, and the good news is that they show it is within our power to make the changes needed to meet carbon reduction targets and halt the worst of global climatic upheaval,” said Paul Allen, project coordinator of Zero Carbon Britain, CAT’s flagship research project.

Since a previous assessment in 2015 the number of scenarios has grown by 30% and their scope has spread to include more developing countries. They incorporate raised ambitions for decarbonising electricity supplies by up to 100%, and doing so between 2030 and 2050.

The results also show the ability of renewable power to provide reliable electricity supplies both around the clock and all year round. This is significant because of the insistence of many industries which continue to use fossil fuels that they have to do so to guard against “intermittency” – the inability of some forms of renewable energy to guarantee an uninterrupted supply of power. Another research project concluded that the sheer scale of the change needed to achieve zero emissions was likely to be too much for human societies to achieve in time.

But the CAT team remain upbeat. “These scenarios are increasingly based on hourly modelling, including for developing countries, which means we can show that green energy supplies can meet demand 24 hours a day and across the seasons,” Allen said. “Through demonstrating the potential of intelligent, mixed supply systems we can show that renewables deliver whatever the weather.”

The mapping in the report shows the range of new scenarios which are now emerging, including for many of the world’s largest emitters. It comes at a time when it is increasingly clear that, with all associated costs included, renewable energy is becoming the cheapest option for most parts of the world.

Many of the scenarios show that making the switch to 100% renewables is increasingly cheaper than taking a business-as-usual approach.

But the report does disclose a number of key challenges. While the global and regional scenarios show great potential, it says, too many countries have still not yet prepared scenarios that align their short-term actions and long-term plans with the levels of ambition required by the Paris Agreement. Of the world’s countries – almost 200 in total – the study found only 32 had developed scenarios for deep decarbonisation, 100% renewable energy or net zero emissions.

To deliver on Paris, scenarios must go beyond electricity, the CAT team says. The world needs to get to zero in all sectors. For that, multi-sector modelling is needed to offer fully integrated net-zero carbon scenarios which include emissions from transport, buildings, industry and agriculture.

And even with a 100% renewable energy system, plus reduced agricultural emissions, and more efficient industrial processes, there will still be significant amounts of unavoidable residual greenhouse gas emissions which need to be balanced by genuinely sustainable net-negative processes.

Land-use is important but is overlooked in meeting the climate challenge, the report says. Society can revitalise natural systems, for example by restoring forests, peatlands and soils. These can absorb and sequester unavoidable residual greenhouse gases from the atmosphere to achieve an overall balance, while also regenerating and protecting natural systems.

Paul Allen says: “From researching this report, we know that tackling climate change and creating a fairer future for everyone is no longer a technological challenge, it’s a challenge of will, of ambition, and of vision.” – Climate News Network

About the author: Alex Kirby is a former BBC journalist and environment correspondent. He now works with universities, charities and international agencies to improve their media skills, and with journalists in the developing world keen to specialise in environmental reporting.