Redflow, the flow battery manufacturer, settles in after a turbulent year

On 30 August Redflow, the Brisbane-based manufacturer of Zinc-Bromine flow batteries, announced that its revenue for the year to 30 June 2018 was Australian$1.8 million (£1m) for a loss of A$12m. Corresponding results for the previous year were A$1.4m and A$12.9m.

Redflow describe 2017/18 as a turnaround year: it was certainly turbulent, with the manufacturing facility being transferred from Mexico to Thailand and with several changes to the board of directors. In September 2016 the company’s single largest investor, entrepreneur Simon Hackett, had stepped in as interim CEO and Chairman with a mission to refocus the company on its flow batteries. In September 2017 Hackett moved back to being a non-executive director and was replaced by Brett Johnson, as Chairman and, after an interim appointment, by Tim Harris, an ex-BT executive, as CEO. Three non-executive directors were also replaced.

As might be expected the Thailand facility took time to get up and running, but in August this year 78 batteries were produced with production expected to reach 150 per month in December and able to ramp up to 250 in the longer term. 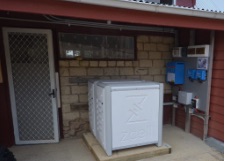 A strategic review carried out in May last year had concluded that the main opportunities for growth in the short term were as back-up power for telecommunications towers. In July Redflow announced an order of A$1.6m for a new television network in Fiji. Its Zinc-Bromine batteries were chosen over lead-acid for their lower weight and longer life, and over Lithium-ion not only for their longer life (being guaranteed for 10 years versus 3 years), but also because they tolerate higher temperatures and do not need any cooling other than ventilation in the tropical conditions. They are safer and can be more easily re-cycled or re-used, and, unlike Lithium-ion, they can be discharged completely without any negative effects.

The same strategic review also concluded that opportunities for the batteries in the residential and small-business market were limited mainly because Lithium-ion batteries were cheaper, but also because exporting power to the grid was more economical in Australia. However the situation may have changed, as illustrated by Jeff Knowles, ex-president of the Australian Solar Energy Society and owner of a large solar array at his home near Canberra.

He wanted 20kWh of storage to back up the array, and decided that he would divide it equally between Lithium-ion and Zinc-Bromide flow batteries. Interestingly, the flow battery is discharged in priority because it can be discharged deeply and frequently. The Lithium-Ion battery is held in reserve for particularly cloudy, cold days. Does this indicate the future, with flow batteries becoming the workhorse for residential and industrial storage, while Lithium-Ion is reserved for topping-up and for portable systems?

Probably not yet. The upfront cost of flow batteries is higher while even if their promoters argue that the levelized lifetime cost is lower the market is still to be convinced. Meanwhile Redflow needs to become profitable. Compared with the revenue of A$1.8m in 2017/18 its costs were high, with A$5m spent on raw materials and A$6.2m on the payroll for 120 employees and 7 directors.

However Redflow was able to raise A$32m during the 2017/18 financial year so that on 30 June 2018 cash and cash equivalents stood at a healthy A$17.7m. If Redflow can sell all the batteries they can produce they should be approaching profitability by the end of next year. The market remains cautious, with the share price at a five-year low of A$0.07.