While wind power in general is seen as environmentally desirable in terms of the planet and emission reduction, it comes with a significant price, paid by birds and bats, species which are also of concern to environmentalists. For there are numerous fatal collisions between birds, bats and wind turbine blades. It is to be hoped that better mitigation and more research will counter-balance the increase both in wind turbine numbers and in the size of turbines and their blades. For a bigger blade potentially means faster speeds at the tip of the blade.

This collision problem has not just burst upon us, research on this negative impact of turbine blades has been undertaken for almost as long as there has been a wind power industry. Initially, research in the States focussed on bird fatalities and the significant number of dead raptors being found at some of the early wind power sites. Better mitigation followed and the number of fatalities fell. The numbers of dead birds are still considerable, but, for birds at least, a sense of proportion is critical: as the Centre for Sustainable Energy in Bristol has pointed out “Wind turbines represent an insignificant fraction of bird deaths caused by man”. (One in nearly six thousand) The vast majority of deaths are caused by birds flying into buildings, birds flying into electric power lines and, most importantly, domestic cats. Interestingly, the Royal Society for the Protection of Birds delayed, but ultimately recently lost, an important case against a huge wind facility to be built off the coast of Scotland. The Society argued that thousands of seabirds could be killed by the blades of the turbines, but this was not seen to be a sufficiently clinching argument. 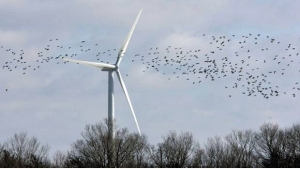 More recently, attention has turned to trying to explain why relatively more bats than birds are being killed at wind farm sites, even though bats’ echolocation means that they should be able to detect moving objects better even than stationary ones. A number of explanations have been put forward. One of the most intriguing suggests that a high proportion of bats are being killed not just by impact but by “barotrauma” caused by rapid air pressure reduction near moving turbine blades. (Moving wind-turbine blades, like any foil, create zones of low pressure as the air flows over them)

A recent article suggested that 90 per cent of bat fatalities involved internal haemorrhaging consistent with barotrauma, while direct contact with turbine blades only accounted for about half of the fatalities. It hypothesised that there are fewer bird fatalities than bat fatalities because there are major differences in the respiratory anatomy of bats and birds. Bats, as mammals, have relatively large pliable lungs and hearts, which expand when exposed to a sudden drop in pressure, thus causing tissue damage, whereas birds’ lungs are compact and rigid, resisting expansion.

But this is not the only area which needs more research. There are 17 types of bat in the UK and more than 1300 bat species in the world, the second most diverse species on the planet. By way of comparison, there are 45 known bat species in the US and some American academics suggest that there could be as many as several hundred thousand bats killed annually at wind facilities. But what proportion is this of the total bat populations? And which populations? An agreed figure is not easily available, yet reliable information about total population sizes would help a lot in providing some sort of overall perspective for the known or knowable numbers of bat fatalities.

And then there is mitigation, which involves inter alia close attention to migration routes. There has so far been little scientific research, though Nathusius’ pipistrelle seems to migrate from Latvia. (There are anecdotal accounts of bats found clinging to offshore turbine towers in the North Sea). As proposals are put forward for more and larger wind power facilities, more evidence-based work is needed e.g. on the follow-up to Environmental Impact Assessments (EIAs). Ten years ago, in 2008, the Eurobats organisation published a first version of guidelines which had the primary purpose of raising awareness amongst wind power developers and planners of the need to consider bats and their roosts, migration routes and foraging areas.

A revised version of these guidelines came out in 2016. As more and more wind farms come on stream it will be important for the wind-power industry to be seen to have paid them due attention.