Ene.field, a community of users, installers and manufacturers led by the EU-backed European Association for the Promotion of Co-Generation, has reported on its 5-year project to analyse the viability of micro Combined Heat and Power Systems based on fuel cells (FCmCHP). One thousand systems were installed in residences across Europe and their performance measured over at least a year. Seven hundred and fifty were in Germany,

FCmCHP systems produce both heat and electricity using natural gas, which is reformed to produce CO2 and hydrogen for the actual cell. The cells can be optimised for heat demand or electricity efficiency. In this study they were backed up by a standard gas boiler to handle peak heat demands and were connected to the electricity grid, as shown below. 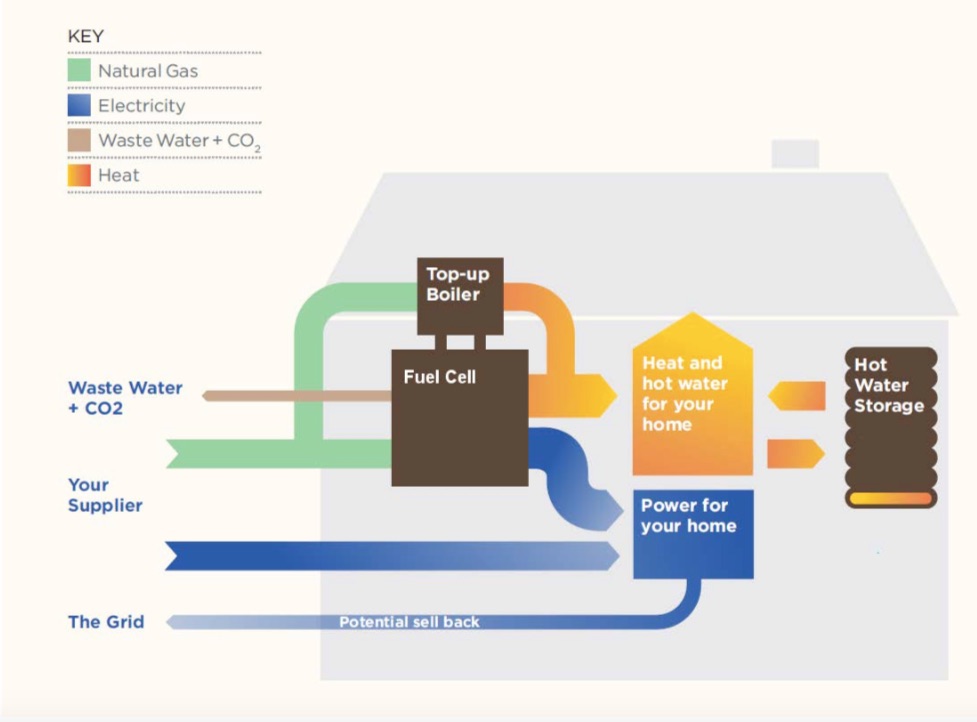 Typical heat and electricity installation for the study (www.enefield.eu)

The study used fuel cell systems from 11 manufacturers, 6 solid oxide and 5 proton exchange membrane. The goal of the study was to investigate the performance and practicalities of FCmCHPs in real situations. Eight research partners also made cost and environmental lifecycle assessments.

Among many findings, the study showed that, given their relative novelty, the systems were reliable and easy to install. Since they required a hot water tank and a gas boiler they were only installed for medium or large homes, or in some cases schools and offices.

The main arguments for micro-CHPs are that they save energy and reduce CO2 and other emissions. Neither argument is completely obvious as the commonly quoted efficiency in producing electricity from a fuel cell is between 45 – 60 per cent which is similar to that for large combined cycle gas turbines.

The FCmCHPs gain on two counts: first in avoiding the transmission and distribution losses of electricity, which are about 8 per cent in the UK; and secondly in using the heat produced to make hot water, which gives a total efficiency (heat and electrical energy out divided by gas energy in) of around 90 per cent. This is similar to the efficiency of a gas condensing boiler, but the latter only produces heat.

The study did indeed find an average total efficiency of 86 per cent. However as ene.field point out this value is not a good guide for individual systems, which varied widely in capacity and were optimised differently for heat and electricity. 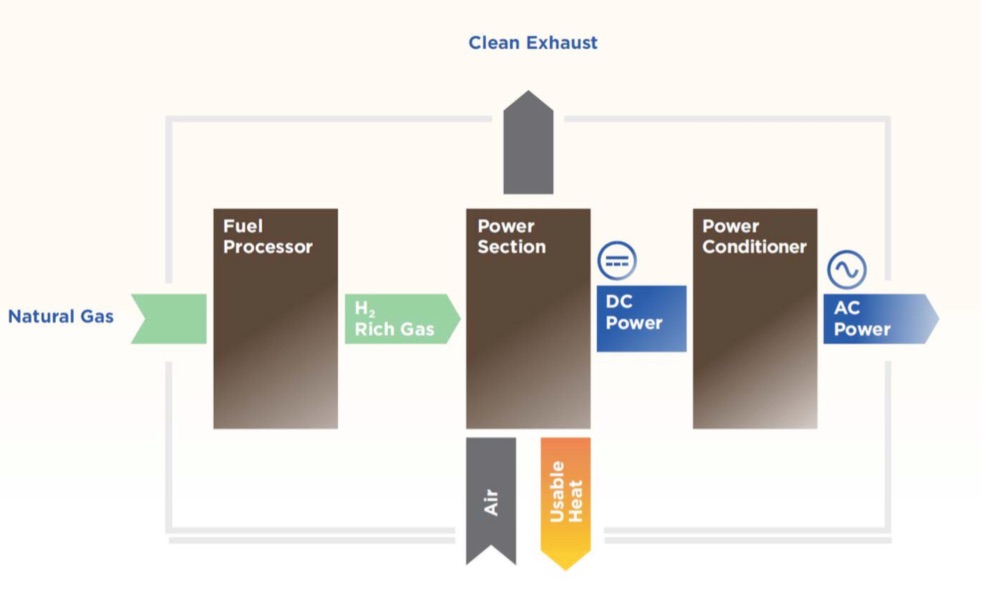 Inside the fuel cell (www.enefield.eu)

The environmental lifecycle assessment, which takes into account emissions of greenhouse gases and other noxious materials from raw material extraction to disposal, found that the FCmCHPs “… have a better environmental performance and in no case worse than the Heat Pump and the stand-alone gas condensing boiler in all settings”.

This comparison assumes that when using a Heat Pump or a boiler the electricity comes from the grid. The better performance therefore depends heavily on the type of electricity generating plant that the FCmCHP is replacing.

The assessment compares emissions from the FCmCHP with those from average current European generation, but as more renewables are used the latter will go down. It is not clear at what point micro-CHP loses its advantage. No mention is made either of carbon capture and storage, which could reduce emissions from central generating plants to near zero but could not be applied to the micro-CHP.

The cost assessment argues that if introduced in large volume the FCmCHP will not only be a more efficient use of natural gas but will save on the cost of central generating plants, and transmission and distribution facilities.

Where does this leave the FCmCHP? Unit costs are high at present as the systems are not yet produced in high volume, indeed some are not yet fully commercial. Government incentives are therefore needed. In places such as Germany that have a high “spark spread” – high electricity compared to gas prices – the incentive may not need to be too large, but in the UK existing incentives have not generated much interest.

In the longer term the FCmCHP reduces but does not eliminate greenhouse gas emissions, and increases dependence on natural gas, which is undesirable (if it must be imported) or unproved (if it is to come from shale gas). Devotees argue that it can be replaced by biogas or hydrogen, but that is another, even larger story.