Tidal Power is a renewable resource which could transform the UK’s energy mix, the question is when

One of the best known stories of the early history of Britain is the tale of how the (vain?) King Canute was persuaded by flattering courtiers that he could successfully order the waves to turn back. It is hard to see why he would be persuaded to do something so obviously foolish. But it is a lot easier to see how some early spin doctor might persuade a king that he could turn back the tide. Unlike waves, tides are predictable- you just need to get the prediction right, though, of course, while tidal power is reliable in the sense that the generating times are predictable, availability depends on the state of the tide. The fact that low tide is predictable does not make it productive. Power can only be generated for around ten hours a day.

Predictability is nonetheless one reason why the methods used in exploiting the tides are rather different from those used in harnessing the power of the waves. While wave power is essentially concentrated wind power, tidal power capitalizes on the real displacement of water caused by the twice daily ebb and flow. Much of the early work on tidal power focused on building a barrage across an estuary, with sluice gates to enable the tide to flow in unhindered. At high tide, with the gates closed, the outflow would then be channeled through turbines to generate electricity, much like a hydro-electric power station.

The best known example of this approach is the La Rance barrage in Brittany, West France, which exploits the eight metre tidal difference in the Dinard estuary. This was for many years the largest tidal barrage in the world and the only one in Europe. It was constructed between 1960 and 1966 and is 330 metres long, with an installed capacity of about 240MW (twenty-four 10MW turbines) and an annual generation capacity of 540GWh. 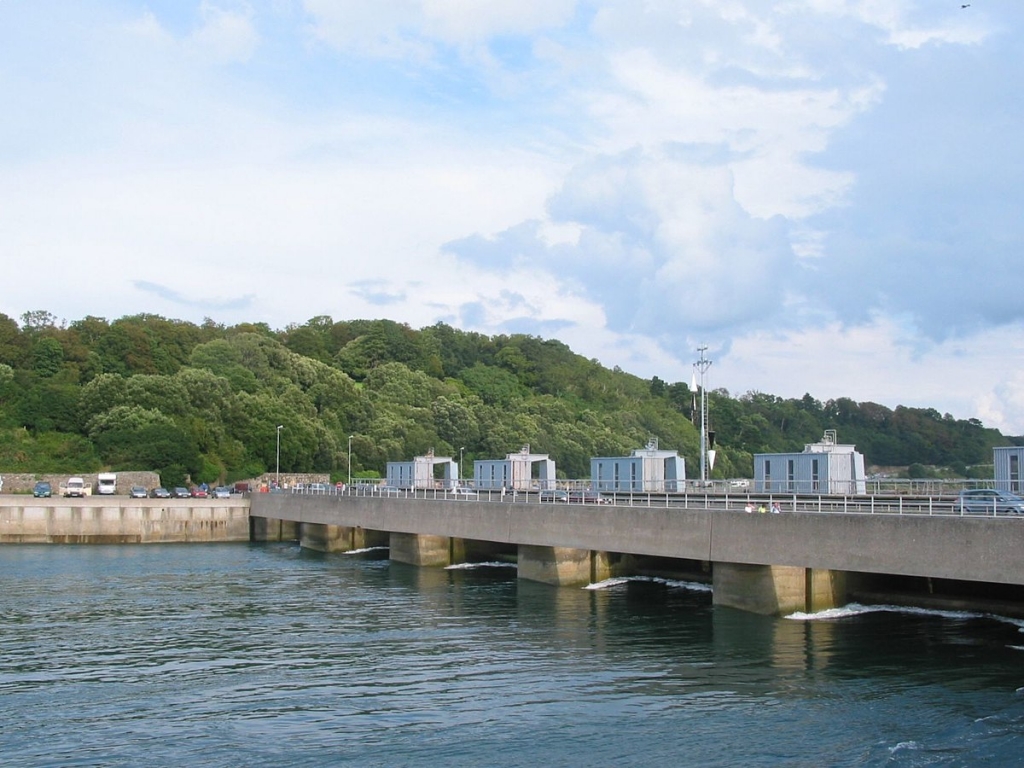 When La Rance was originally built, it was hoped that it could utilize the flood tide as well as the ebb tide. But generation is now almost entirely on the ebb. And it comes with huge navigational and environmental problems- it is worth noting that the French never replicated La Rance. For whatever the longer-term running cost advantages, the initial construction phase is lengthy and expensive. Particularly during construction, the impact on the normal pattern of water flows is considerable.

For the utilisation of tidal power in this way to be even a feasible option, a site is needed with a “range” of at least sixteen feet between high tide and low tide. Since the normal “range” in the open sea is not much more than a metre, the most promising locations are likely to be an estuary or bay, shaped like a long funnel. This concentrates the incoming tide into a sharply narrowing space, causing in extreme circumstance a tidal bore. Classic examples are the Bay of Fundy, in Canada and the River Severn. Tidal projects to generate electricity had been under discussion for the Bay of Fundy and its various sub-basins for several decades but the problems were hard to overcome. Similarly, any barrage across the Severn, for example, confronted the need to incorporate really quite sizeable locks to deal with ships using the port of Bristol.

Perhaps as a result, other thoughts started to emerge. Was it a straw in the wind that 1984 saw the inauguration of the 20 MW Annapolis tidal power generating station in a sub-basin of the Bay of Fundy in Canada.? It utilises a causeway built in the early 1960s, which was originally designed to serve as a transportation link as well as a water control structure to block the Bay of Fundy tides from entering the Annapolis river. The resulting rock-filled dam carries Trunk 1 road across the river, as well as housing the power plant’s single four blade turbine and sluice gates, which are closed as the incoming tides create a head pond in the lower reaches of the Annapolis River upstream of the causeway. When the gates are opened, water rushing into the sea drives the turbine to generate power when a head of 1.6m or more is created between the head pond and the sea side with the falling of the tide. It generates 50GWh of electricity annually

More substantially, in 2003 the South Koreans announced the commencement of the biggest tidal power project in the world (254 MW) the Sihwa Lake power station, which opened in 2011.It utilises not a barrage but a 12.5km long seawall constructed in 1994 for flood mitigation and agricultural purposes. Power is generated on tidal inflows into the 30km2 basin with the help of ten 25.4MW submerged bulb turbines. Eight culvert type sluice gates are used for the water outflow, which generates a total of 552.7 GWh annually.

This same concept of a non-estuarial barrage lies behind the latest group of project proposals for the UK, which have the staggering total of some 17 GW. Most of them are clearly for a more distant future. But of immediate interest are the proposals for the Swansea Bay Tidal Lagoon project, which is estimated to have a generating capacity at least equal to the 240MW La Rance power station and at most over 300 MW, which would make it the largest tidal project in the world. The plant is to be located at a site with average tidal range of 8.5m and will involve the construction of a 9.5km-long sea wall or breakwater facility to create a lagoon cordoning off 11.5km2 of sea. The plant will use reversible bulb turbines to generate power as water passes in and out of the lagoon with the rise and fall of tides. Estimated annual power generation capacity is rather over 400GWh. These proposals were the subject of the very detailed Hendry report (See Greenbarrel of 1 February 2017). The UK Government’s response is now awaited.