Velocys thinks small but depends on a big success in Oklahoma

“Think Smaller” might seem an odd slogan for a company yet to make its first profit.  It does, however, reflect succinctly two aspects of Velocys’s business.

Velocys provides the reactors that are the key components of gas-to-liquids (GTL) and biomass-to liquids (BTL) processing plants.  They believe the main market for this technology is in plants with small inputs, for example isolated gas fields or bio-mass from a municipal waste facility.  They add value by turning cheap gas into valuable liquids. The market is claimed to reach 25 million barrels per day.

Such plants, producing a few thousand barrels of petroleum products per day, are in contrast to large plants of 100,000 bpd that became suspect after Shell, the market leader, abandoned their latest GPL project in 2013.

Velocys’s reactors not only handle smaller volumes, but also contain smaller channels through which the fluids are passed. These micro-channels, plus super-active catalysts, are more efficient and are at the heart of their 900 odd patents (successfully defended in two IP disputes in 2015). 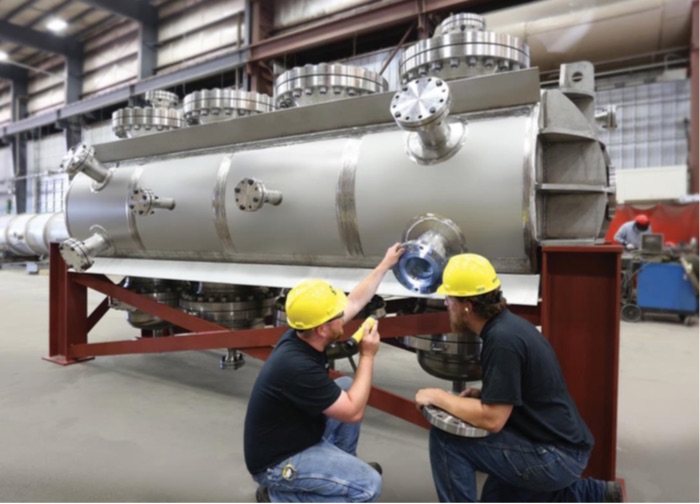 A Velocys reactor, capable of producing 175 bpd of liquids. A plant may consist of multiple such units or larger versions of this unit.(www.velocys.com)

Over the last few years Velocys have taken this technology from the research bench to a pilot plant in their Ohio lab, but commercialisation has so far eluded them. There have been demonstration projects, plans that did not materialise (for example the GreenSky London project to produce jet fuel for BA from waste at Turrock, Essex), and a few reactors sold, but no commercially operating plant. Hence the importance of Velocys’s main current project, the ENVIA Energy plant in Oklahoma City.

This is a joint venture with Waste Management  (who manage a large landfill near the plant), NRG (a large integrated power company) and Ventech Engineers (who specialise in gas processing facilities). The plant was given the go-ahead in 2014 and should start operating before the end of the year.  If successful it will serve as a commercial reference and an encouragement for the technology.

Such encouragement is much needed. 2015 was a difficult year for the company with low oil price, the suspension of their chief executive, Roy Lipski, and the withdrawal of one long-term backer. However, a new chief executive, David Pummell, was appointed early 2016, and shares were soon taken up by Ervington Investments and Invesco Asset Management.

Other projects and studies are in the pipeline, although one promising project to produce special waxes at their site in Ashtabula, Ohio, was put on hold in July because of the difficulty in raising capital and to defer costs.  This was in spite of the project being considered economically viable.