Velocys has a solution in search of an application. Formed from the merger of Oxford Catalysts and the Pacific Northwest National Laboratory in 2008, Velocys owns intellectual property concerned with reactors that turn gases into liquid hydrocarbons using catalysts and micro-channels. The problem has always been to find a significant market. Past plans include the processing of natural gas from remote gas fields, jet fuel from waste in Essex and diesel from waste in Oklahoma. None have worked out, for different reasons (in Oklahoma the plant ran commercially for 7 months but was stopped because of gas leaks that were nothing to do with Velocys.

The current focus is on the Altalto project, a waste to jet fuel plant to be built on the Humber in north Lincolnshire in conjunction with British Airways. The project received planning permission in June last year and is now at the stage of front end engineering design, funded mainly by BA and, until recently, Shell. If all goes well, financial close will occur in 2022.

The process will first convert household and office waste into synthetic gas (a mixture of carbon monoxide and hydrogen) in a process similar to that used by other waste processing companies[1]. After cleaning, this gas is passed though Velocys’s reactors to produce Sustainable Aviation Fuel (SAF).

Velocys claims that the whole process leads to a net saving of 70 per cent of the CO2 emissions emitted by conventional jet fuels. If on top of this the CO2 emitted during the production of SAF is captured and stored the net effect is that emissions are negative (because, for example, paper in the waste comes from wood which has absorbed CO2 from the atmosphere). As it happens a carbon capture cluster is planned for the Humber area.

The proposal is similar to the Essex project, which was abandoned in 2015 even though subsidies were available and the industry-funded Sustainable Aviation organisation had been in operation since 2005. What is different this time? 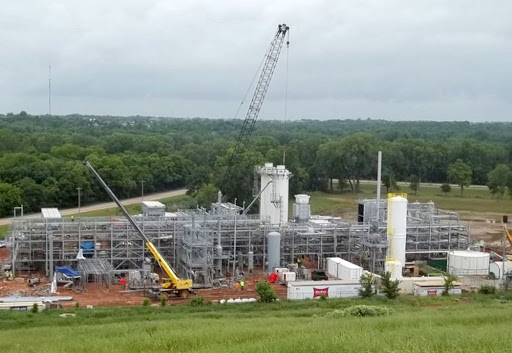 On the one hand Velocys now has the experience of seven months of commercial operation in Oklahoma. On the other hand there is now a much greater focus on reducing aviation emissions, previously seen as one of the last sectors to be decarbonised. A “zero emission plane” was one of the Prime Minister’s ten strategy points for a green recovery, while the December Energy White Paper announced £15 million to support the production of SAFs. The Sustainable Aviation organisation seems to have lost steam after 2017 but a new organization, the Jet Zero Council with members from both government and industry, was launched in July 2020 to accelerate developments.

At present these plans are more talk than action, while the sum of £15m will not go far. But it is early days, and it is not clear how much support will be given to biofuels such as Velocys’s product as opposed to longer range solutions such as hydrogen.

As noted, Shell was a partner in the Altalto project but withdrew in January 2021 stating that it wished to “..focus on…other lower-carbon fuels opportunities which leverage our own technology”. Shell used to be the leading expert and developer of natural gas-to-liquid processing until 2013, when stopped investment. Did they withdraw from Altalto because they thought it was not a viable solution, or because they saw it as a very viable solution which they should be pursuing on their own?

Velocys currently has three other projects. In Mississipi the company is developing a plant to process waste from the paper and lumber industries into 25million gallons of diesel a year. The target for financial close is Q4 2021. Last year in Oregon it completed the sale of reactors and catalysts for the production of SAF to Red Rock Biofuels; and finally in Japan it is developing a project with Toyo Engineering.