Get Set for Decades of Sea Level Rise, Studies Warn 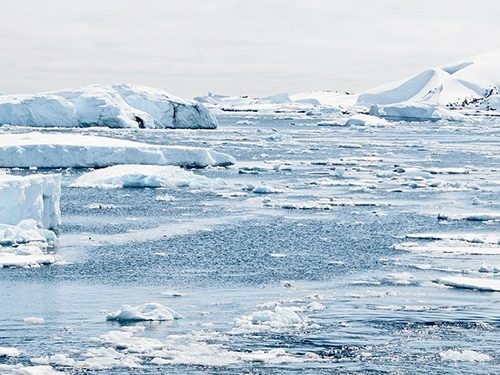 This story includes details on the impacts of climate change that may be difficult for some readers. If you are feeling overwhelmed by this crisis situation here is a list of resources on how to cope with  fears and feelings about the scope and pace of the climate crisis.The small glaciers of Greenland are shrinking faster than ever. In the first years of this century, they were measured as losing ice at the rate of 27 billion tonnes a year. Between October 2018 to December 2021, that rate grew to more than 42 billion tonnes a year, a 55% increase.

Now, that lost water helps raise global sea levels. And there is even more ominous news from the other end of the globe. The most closely watched glaciers of Antarctica are now losing ice faster than at any time in the last 5,000 years, according to a new study. Most of the world’s frozen fresh water is stored on the vast southern continent. And the melt rate means that —over the course of centuries —global sea level could rise by more than three metres.

And rise it will. A third new study warns that even if the world’s nations keep their promise to reduce all greenhouse gas emissions to effectively zero by 2050, and hold global heating to no more than 2°C above the long-term average for most of human history, sea levels will go on rising for hundreds of years. The message is: get ready now for a very different tomorrow.

That Greenland’s glaciers are in retreat, and that the Arctic’s most massive ice cap is melting, is not news: oceanographers, space scientists and climate researchers have been watching the warming of the polar regions, and the loss of stored ice, for decades. Years ago, they measured the acceleration of one great frozen river to 45 metres a day, and the acceleration has continued.

But a new study in the journal Geophysical Research Letters reports on what may be the first close look at the island’s seemingly peripheral glaciers; isolated from the main ice sheet, and some as tiny as one-20th of a square kilometre in area.They may be small, but they matter.

There are more than 20,000 of them. They may add up to only 4% of Greenland’s ice cover, but they contribute as much as 11% of the island’s total ice loss. Because they are small, they are more vulnerable to rising Arctic temperatures, and the Arctic has been warming at a rate faster than almost anywhere else on Earth.

“It is disturbing, but to be expected, that the northernmost ice sheet on the planet is hit hard by ongoing temperature rises,” said study lead Shfaqat Abbas Khan of the Technical University of Denmark, “because it is evident that the temperature here has risen the most in the last 20 years.”

Meanwhile, in the most southern continent, researchers have been warning for years of the rate of loss from the West Antarctic Ice Sheet, and in particular the retreat of two massive glaciers, called Thwaites, and Pine Island: these together cover an area bigger than the United Kingdom. British and U.S.

Researchers report in the journal Nature Geoscience that these two great flows of frozen water—relatively stable for the last five millennia—are now losing mass at a rate without precedent in the last 5,500 years. They contain enough water to raise global sea levels by 3.4 metres. And, says co-author Dylan Rood of Imperial College, they are already raising global sea levels.

“These currently elevated rates of ice melting may signal that those vital arteries from the heart of the West Antarctic Ice Sheet have been ruptured, leading to accelerated flow into the ocean that is potentially disastrous for future global sea level in a warming world. Is it too late to stop the bleeding?”

The question may be rhetorical. We live on a planet that is mostly ocean, and subject to the inexorable laws of thermodynamics. Ocean covers 70% of the global surface. Water is slower than air to absorb heat, and slower to release it. The ocean’s vast volume can store far more heat than can the atmosphere, or the continental rocks. So it becomes the most important element in the control of global temperatures.

All of which means that, according to a new study in the journal Atmospheric and Oceanic Science Letters, deep ocean warming and global sea level rise will continue long after greenhouse gas emissions are slowed to “net-zero” by mid-century.

This  means that nations, city planners, coastal communities, and other key decision-makers need to start thinking now and in detail about how to cope with ever rising tides, ever more devastating storms, and ever greater economic loss.Once again, this is not the first such warning. Science has a way of checking its own conclusions, and the latest study simply reinforces an alarming, and alarmingly familiar,message.: This is that low-lying coastal cities, communities, farmlands, and ecosystems are about to be flooded, to be poisoned, to be eroded, to be swept away by an ocean that swells as it warms, and rises higher as ever more ice melts, and ever more glacial water seeps into the sea.

“Changes to the ocean will also continue to impact extreme weather over these longer periods, as well as sea level rise.” said study co-author Lijing Cheng of the Institute of Atmospheric Physics of the Chinese Academy of Sciences.

“And infiltration of sea water into fresh water supplies can affect coastal food supplies, aquifers, and local economies. Other impacts that are connected to ocean warming and so need to be considered for the very long term include more damaging storm surges, coastal erosion, marine heat waves, ocean acidification, and marine oxygen depletion