Gold hydrogen is hydrogen that occurs naturally in the earth’s surface. How wonderful if we could just drill for it like methane! The idea seemed absurd until Dr Ballentine introduced us to studies which showed that hydrogen is being generated in the continental crust at the rate of 500,000 tons per year and has been doing so for some 2 billion years. If so, why have we not noticed?

It turns out that we have, sometimes at our peril. The eternal flames observed since ancient times are normally ascribed to methane, but it seems that in many cases there is a small percentage of hydrogen, and in some cases much more. Ten years ago a farmer in Mali observed a gas leak on his land and decided to set it alight, to his cost. A Canadian company, Hydroma, subsequently showed the presence of a shallow reservoir with 98 per cent hydrogen. 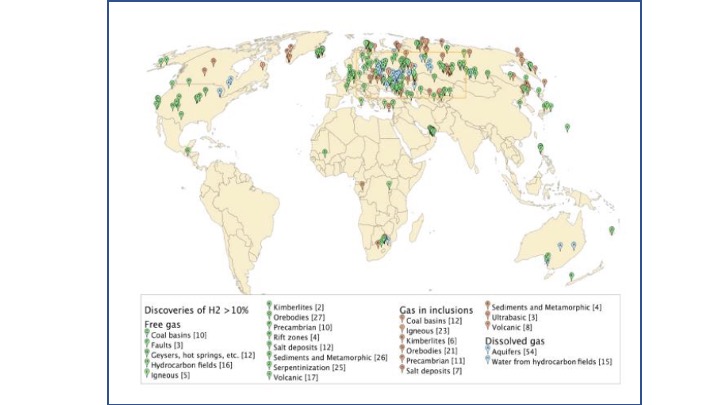 Discoveries where H2 concentration is > 10% (Green = Free gas, Brown = Gas in inclusions, and Grey = Gas in aquifers). The concentration in Eastern Europe and Russia is the result of strong interest in the former Soviet Union. From “The occurrence and geoscience of natural hydrogen. A comprehensive review” by Viacheslav Zgonnik.

Hydrogen is produced primarily in old, pre-Cambrian, rocks in the crust which have a high concentration of iron compounds and of radioactivity. Water reacts chemically with the former and is broken down by the latter to produce hydrogen. The issue then becomes very similar to that of hydrocarbon exploration: where does it move to, how does it accumulate to form a proper gas phase and how does it get trapped in accessible geological structures.

There are not many answers to these questions, so Dr Ballentine introduced us to another element that goes through a similar process as hydrogen, namely helium. It is also produced in the continental crust by radioactivity and accumulates in the same way as hydrogen, but because of its industrial uses has been studied more closely. Not surprisingly some of the best accumulations have been found beneath salt beds, because they are impermeable to even the smallest molecules such as helium and hydrogen.

But that is not the whole story. Of two wells drilled though a salt bed in the Amadeus basin in Australia, the gas from both had around 7.5 per cent helium but one had 11 per cent hydrogen and the other virtually none. The problem is that helium is an inert gas while hydrogen is quite reactive. Evidence from South Africa and Canada shows that both helium and hydrogen can be found in deep mines, but in shallow mines the hydrogen has virtually disappeared.

The blame is put on microbes and other compounds that react with the hydrogen to form methane. The microbes are found in shallower rocks. They react with the hydrogen as it seeps slowly upwards, leaving little near the surface. There is a further problem, illustrated by a basin in north east Brazil. Early hydrocarbon exploration wells encountered gas that was rich in helium and hydrogen. As new wells were drilled the hydrogen concentration found dropped by half in seven years.

Dr Ballentine concluded that the current priority was to study the preservation of hydrogen in trapped structures. While a rush to explore for hydrogen was unlikely, he felt that there was some “low hanging fruit” – such as in Mali – which could be exploited. As he pointed out, the oil industry started with simple cases. Unfortunately, much more hydrocarbon seems to have been preserved than hydrogen.