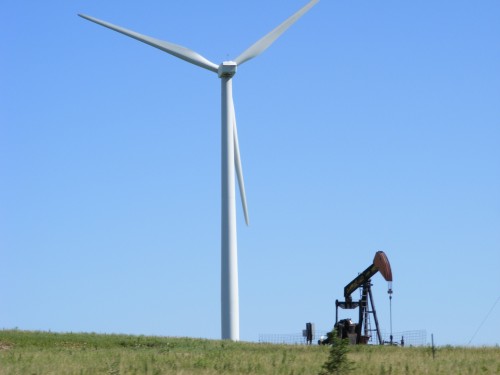 By the Energy Mix Staff

Oil demand could peak by 2025 as the global energy transition gains momentum, and renewable energy is on track to become “the new baseload” by 2030, according to this year’s edition of the Global Energy Perspective report issued by McKinsey & Partners.

“In the past few years, we have certainly seen the energy transition pick up the pace,” said McKinsey Senior Partner Christer Tryggestad. “Every year we’ve published this report, peak oil demand has moved closer.” Now, “under our middle scenario assumptions, oil demand could even peak in the next three to five years, primarily driven by electric vehicle adoption.”

But even that may only be the start of something bigger, Tryggestad added. “Even if all countries with net-zero commitments deliver on their aspirations, global warming is still expected to reach 1.7°C,” he said. [International Energy Agency Executive Director Fatih Birol actually said 1.8°, and we know that every 1/10 of a degree matters—Ed.] “To keep the 1.5°C pathway in sight, even more ambitious acceleration is needed.”

The executive summary of the report traces [pdf] the “unprecedented uncertainty” in global energy markets, triggered not only by Russia’s war in Ukraine but by the long-term shift to low-carbon energy systems and the rebound in energy demand as the world emerged from the COVID-19 pandemic.

“While governments and businesses are increasingly committed to steep decarbonization targets, energy markets face extreme volatility driven by geopolitical tensions and a rebound in energy demand,” the executive summary states.

But even so, those markets are shifting from liquid (and almost invariably fossil) fuels toward renewable electricity and hydrogen. “To keep the 1.5°C pathway in sight, the global energy system may need to accelerate its transformation significantly, shifting away from fossil fuels toward efficiency, electrification, and new fuels, quicker than even the announced net-zero commitments.”

There’s already strong momentum in that direction, the analysis shows.“The report projects a rapid shift in the global energy mix, with the share of renewables in global power generation expected to double in the next 15 years while total fossil fuel demand is projected to peak before 2030, depending on the scenario,” RenewEconomy reports. “Renewable energy is on track to account for 50% of the world’s power mix by 2030, and around 85% by 2050, thanks to the increasing cost competitiveness of new solar and wind capacity.”

Even in spite of the war—and the resulting push by fossil lobbyists to ramp up oil, gas, and coal production from any other source—”the long-term transition to low-carbon energy systems continues to see strong momentum, and even acceleration,” RenewEconomy adds. The various scenarios in the report show fossil-fired generation increasingly limited to a back-up role to ensure the stability of a predominantly renewable grid, with its load factor—the proportion of the time it’s actually needed—falling from 40 to 28% between 2019 and 2050.

“Renewables become the new baseload,” McKinsey states, with the falling cost of renewable energy and energy storage standing alongside climate urgency to drive a rapid transition.

The analysis shows hydrogen demand growing four- to sixfold through 2050, “driven by road transport, maritime, and aviation,” RenewEconomy writes. “Hydrogen and hydrogen-derived synfuels are expected to account for 10% of global final energy consumption by 2050.”

To finance the transition, McKinsey projects global energy investment increasing 4% per year to land somewhere between US$1.5 and $1.6 trillion in 2035. Investments “are projected to be increasingly skewed towards non-fossil and decarbonization technologies.”

McKinsey warns that the business models for a highly decarbonized energy system are not yet clear, and electricity markets will have to be redesigned to support renewable energy and carbon capture technology. The report projects carbon capture, utilization and storage (CCUS) technologies capturing two to four billion tonnes of emissions by 2050 “to decarbonize heavy industries where fossil fuels continue to play a significant role