We last looked at the performance of AIM-listed renewable energy stocks in April 2021. The plots below show the performance of the same stocks, plus some new ones, over the last two years. Clearly all stocks have been affected since the beginning of the year by fears of inflation and the invasion of Ukraine, but some general observations can be made on their performance in 2021. As before they are divided into four groups: waste-to-fuel, hydrogen, storage (batteries), and funds.

The first three groups show remarkably similar results: after a steep increase in December 2020 they have mostly drifted steadily downwards in 2021, even though the FTSE 100 index rose 15 per cent over the same period and the AIM All Share index by 5 per cent. The funds are now listed on the main board and are discussed separately. 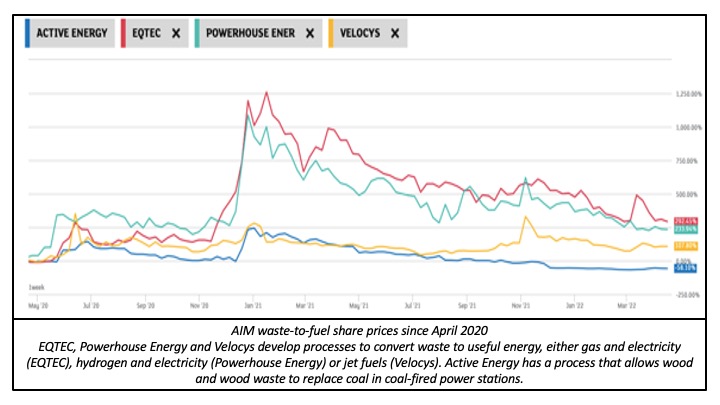 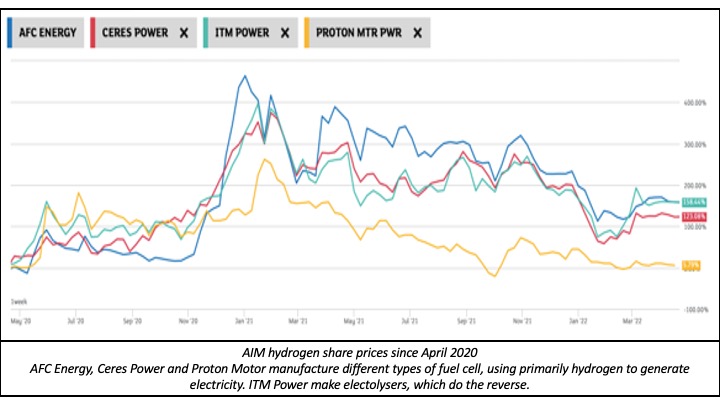 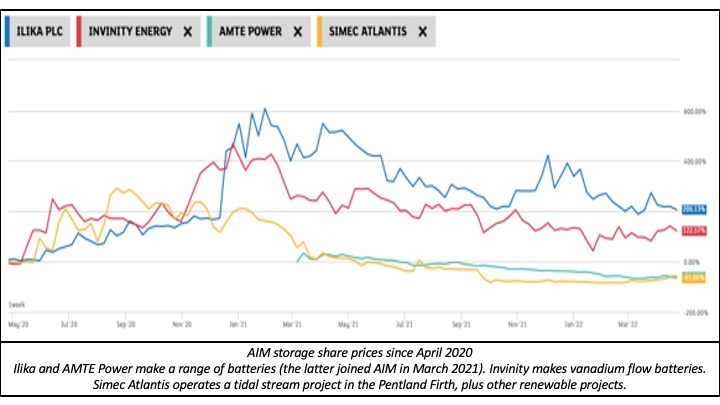 None of these stocks has yet made a profit, and for a few the only revenue is from government grants, but even so these results are disappointing. Even ITM Power followed the trend, although it was mentioned in the recent Energy Security Strategy document in connection with its Gigastack project. Maybe investors are not convinced by the future of hydrogen, for which there may be a reasonable doubt. The same cannot be true of storage or waste to energy, for which the need is absolutely clear. Some reaction after the sharp rises in December 2020 could have been expected but the continual slide throughout the year is worrying.

It is possible that AIM investors are not convinced by renewables in general, and are more comfortable with the traditional oil and gas business. AIM lists 83 small oil and gas companies with a total market capitalisation of £7.5 billion. By contrast only 31 renewable energy companies are listed with a total market capitalisation of £6.1 bn[1]. Of this more than a third (£2.2bn) is from one company – ITM Power – and a further £1.4bn is from fuel cell manufacturer Ceres Power.

As expected the funds are largely flat, acting like utilities. They have a total market capitalisation of £7.2bn and are compared with the FTSE 100 index below. 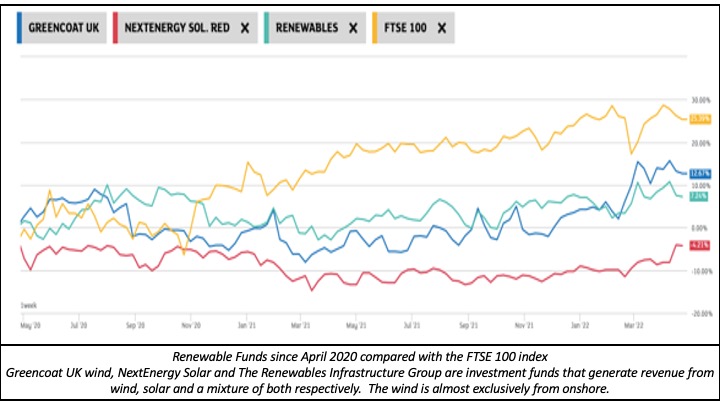 There are of course other entities investing in renewable energy. Many small businesses with new ideas are privately financed with or without government support. Offshore wind has received substantial investment from SSE and various European businesses. Oil majors like BP, Shell and Total are slowly coming on board. Still, one is left with the sense that the market is not ready to take the sort of bets on the future that were made on the so-called technology companies ten or twenty years ago.

On the positive side there are some interesting new entries. Four lithium companies have joined over the last year (Atlantic, Zinnwald, Bradda and CleanTech), all exploiting foreign lithium sources. British Lithium, which mines in Cornwall, is privately owned. Atome, which listed in January 2022, proposes to produce hydrogen or ammonia using geothermal power from a project in Iceland and hydroelectric power from a project in Paraguay. Finally, CPH2 (Clean Power Hydrogen), which listed in February 2022, is developing a membrane-free electrolyser, an alternative to the standard method of producing hydrogen. 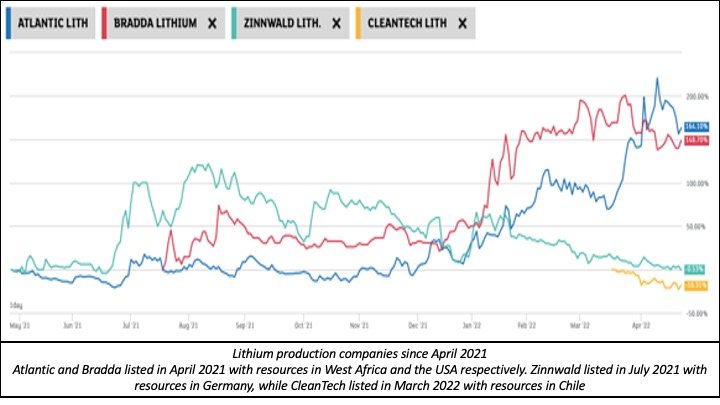 [1] These are the companies followed by Greenbarrel, consisting of all 14 in the alternative energy category plus others with major contributions to renewable energy in the electrical, electronic, and mining categories.