Monday 4 April saw the release of the seventeenth annual report by the Global World Energy Council (GWEC), which is the most widely used source of data on the wind energy sector for industry, governments and others. At the industry level, the report paints an impressive picture, showing that in 2021 total global capacity rose by some 93.6 Gigawatts (GW), the second best year on record, giving a grand total of 837 GW of wind capacity installed. But at the overall level things are not so good. There are now major reasons to support a considerable expansion of action in favour of renewables, which are unlikely to be welcome to policy makers.

The first is to do with climate change: to reach the decarbonisation and energy targets set by the Paris Agreements, we need to do much more immediately. As the GWEC report puts it, “More than ever, action cannot be delayed” By 2030 we need to quadruple wind capacity growth if the world is to stay on course to register 1.5C and net zero by 2050. Otherwise we will have missed our chance. (GWEC forecasts that if nothing changes we will have less than two thirds of the necessary wind energy capacity by 2030.)

Secondly, the latest Ukraine-related problems have reinforced the need for speedy action: “The only permanent fix for the three related problems of energy supply, climate change and affordability is a determined and accelerated effort to carry out the energy transition and move away from fossil fuels to renewables. Policymakers have been both too slow and too hesitant in carrying out the transition, leading to what the IEA and others have referred to as a “disorderly transition” where the world is exposed to extreme fossil fuel volatility. 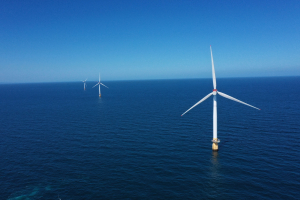 Reverting to the industry level we are told that, as in 2020, China(50.91per cent) and the USA(13.58per cent)were the world’s largest onshore wind markets accounting for almost two-third of all new capacity, though they both installed less than the previous year for tax reasons. China (21.1 GW) also installed more off-shore wind than any other country, and, in the process, finally wrested from the UK the title of world leader in installed capacity in this somewhat specialised field. It is however somewhat ironic that the UK still leads the world in floating off-shore wind, a still newer technology, promising a “read-across” from the oil and gas industry. The British Prime Minister, Boris Johnson, is committed to generating 1GW of electricity by 2030 using this technology which he has referred to as “Brand new”.

In the report, GWEC foresees a bright future for floating off-shore wind technology “which has the potential to expand rapidly to deliver the capacity the world needs and 2021 witnessed further breakthroughs in the sector from oil and gas majors. Large European oil and gas companies have won offshore wind project auctions in Europe and N. America and won seabed leasing auctions on either side of the Atlantic Ocean. These companies have unparalled offshore engineering skills and financial strengths which will take floating wind from the current demonstration phase to full commercialisation by the middle of the decade.”

Let us hope they are correct!