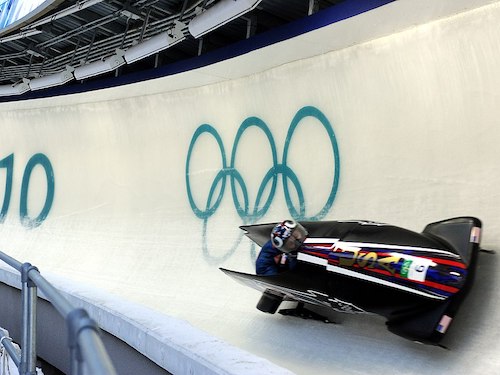 Primary author Tim Radford
Climate change could be about to rearrange the geography of the Winter Olympics. A new study has found that—if the world goes on as it ha-s, burning ever-greater quantities of fossil fuels—of the 21 cities that have already hosted the Winter Games, only one could expect to be able to do so by the century’s end.

And even if—a very big if—the world’s nations manage to contain global greenhouse gas emissions at the levels agreed more than six years ago at the Paris climate crisis, by 2100 only eight of these 21 cities would be considered a reliable climate for competition on snow and ice.

That is because the world has been warming inexorably, and the colder regions of the northern hemisphere have already been warming even more relentlessly since the first such Games in Chamonix, in the European Alps, in 1924. Between 1920 and 1950, the average daytime temperature of the host cities was 0.4°C. Between the 1960s and the 1990s, it was 3.1°C.

Economies that depend on winter sports have been watching glaciers retreat and ski slopes vanish for years. By the 21st century, the average thermometer had risen in the host cities to 6.3°C. This includes Beijing, which is preparing to launch this year’s games with copious amounts of artificial snow.

So researchers at the University of Waterloo asked the contestants themselves about the future of a host of sports that all evolved in a deep winter world of firm fresh snow and hard ice. They report in the journal Current Issues in Tourism that they surveyed 339 elite athletes and coaches from 20 countries to define conditions that would be considered fair and safe for biathlon and bobsleigh, for ski jumps and speed skating, for ice hockey, curling, and snowboarding over the 16 days of the Winter Olympics.

Injury rates are notoriously higher at the Winter Games than the summer events, and the last three Olympic Winter Games shared the highest injury rates recorded among Olympic and Paralympic alpine sportspeople: 55% higher than preceding years.

“Olympic events seek to showcase the skills of the world’s greatest athletes on a world stage,” they write. “Athletes risk serious injury as they race [at] 160 kilometres per hour down a steep slope, throw tomahawks in a superpipe, or complete complex aerials 20 metres in the air.”++++++++========One athlete told them: “Our sports are going to end unless there is serious change in the world.”

They asked the competitors to rate a range of conditions and compromises—fog, wind, rain, ice, and a suite of snow conditions ranging from fresh powder and hardpack to chemically-treated and machine-made—along with the hazards of altered start times and venues, cancelled training runs, and last-minute course alterations, then rate them for safety, performance, and fairness.

The research team used the answers to settle on what contestants thought were the ideal temperatures for mega-events such as the Winter Olympics. Competitive sport at temperatures lower than -20°C was unacceptable. So was any contest at temperatures of 10°C and above. The ideal range would be somewhere between -10°C and -1°C.

The researchers then looked into the future. Northern hemisphere winters are already shorter—73 days rather than the 76 once considered normal, 70 years or one human lifetime ago—and will go on getting shorter. By the 2050s, if greenhouse gas emissions continue as they have so far this century, winter will on average last 53 days. By 2100, the season could be down to 23 days.

After compiling the host cities’ past records and future projections for narrow snow coverage, wet snow, rain, and unacceptably high temperatures, all as indicators of unfair or unsafe conditions, the researchers rated potential hosts as reliable if all four occurred on less than a quarter of the days in February. Then they matched the probabilities against future temperatures projected if the world sticks to the Paris agreement to hold global warming to 1.5°C, or in a high-emissions future of 4°C average warming or higher.

Thirty years from now, in a low-emissions world, the Games might be possible in four former host cities in North America, two in Scandinavia, one in the European Alps, one in China, and two in Japan, they concluded. Sixty years from now, under a high-emissions scenario, only one city survives to repeat its bid: Sapporo, Japan, which last hosted the games in 1972.

“The problem is that contestants don’t face the same conditions,” said Daniel Scott, the University of Waterloo geographer who led the research. “When snow is soft and carved by the athletes before you, it creates ruts or piles of loose snow for alpine or Nordic racers. As a result, start position is a major determinant of podium finishes. Sometimes the conditions become so altered that athletes break their bindings or even skis.”

Paradoxically, although it will make the competition increasingly difficult, the rise so far in winter temperatures has not obviously reduced performance measures at the Games. Technology has advanced, and so has athlete training. And although the global trend is warmer, each winter and each location can expect its own caprices.

“While the Olympic hosts have experienced warming and the games have been held in warmer host locations this century, there is not a steady unidirectional warming. Climate variability and weather fluctuations still play an important part in the conditions at each games,” Scott told The Energy Mix.

The 2010 Games in Vancouver, for example, “had good snow conditions at both the Cypress and Whistler Mountain venues to start the games,” he recalled. “Then El Niño showed up with a prolonged warm snap in Vancouver/Cypress and it became too warm to make snow, so they had to put down hay bales and helicopter snow in from nearby valleys to create the jumps.”

The 2014 Winter Games in Sochi, Russia “had much greater problems, and as result the injury rate for the Paralympic snow sports increased six times what it was in Vancouver,” Scott added. “Looking at the forecast, Beijing should be fine, with cold enough temperatures to preserve the machine-made snowpack and keep good conditions throughout the Games.”