The need for electricity storage has produced a bewildering array of different companies using different techniques. There are many ways in which they can be classified, one of which is by their capacity to store electricity. Small cells, such as lithium-ion, can of course be duplicated but generally become uneconomical beyond a certain size.

Currently the largest electricity stores are pumped hydro schemes such as Dinorwig in North Wales, but the number of sites where such schemes can be implemented is limited for practical, economic or political reasons. Hydrostor, a Canadian company offers a system of compressed air storage as an alternative.  For example, it is building a large system in California capable of storing 3,200 MWh of electricity, or 8 hours at its maximum output of 400 MW (Dinorwig can store 9,000 MWh for 5.3 hours at its maximum of 1,700 MW).

The Hydrostor system stores compressed air. The concept is very simple: use electricity to drive a pump that compresses the air, store it, then let it expand and drive a turbine when electricity is needed. There are two major challenges: first, the act of compressing the air generates a lot of heat, which represents a loss of energy; secondly, where to store large amount of compressed air.

Hydrostor overcomes the first challenge by capturing and storing as much of the heat as possible and then using it to heat up and further expand the air before it drives the turbine. The company does not say how the heat is stored, but it does hold a patent for storing heat in a compressed liquid underground. More importantly the overall loss of energy throughout the storage process is not given, nor its converse the efficiency. It is hard to beat the 90 per cent efficiency of the lithium-ion battery in this regard. 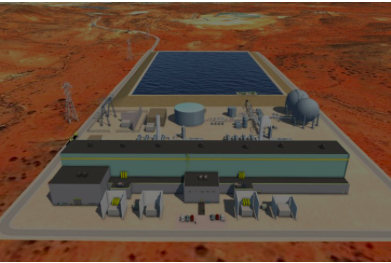 A view of Hydrostor’s Advance Compressed Air Energy Storage (A-CAES) system. The water reservoir maintains pressure on the air which is at a considerable depth below it (www.hydroctor.ca)

For the first demonstration system, which was completed near Toronto in 2015, the compressed air was stored in large flexible containers placed 180 ft below the surface of Lake Ontario. The hydrostatic pressure of the water ensured that the air was stored at a constant pressure. The first commercial system, also near Toronto, used an abandoned salt mine. The systems currently being built also use the hydrostatic pressure of water to hold the air at a constant high pressure, but do so with the air in tanks in purpose-built caverns deep under a water reservoir.

Three such projects are under development, two in California and one in New South Wales, with expected completion dates from 2025 to 2227. Their maximum power ranges from 200 to 500 MW, which they can supply for 8 hours, thus storing from 1600 to 4000 MWh of electricity. Currently the largest Lithium-ion battery, theVictoria Big Battery in Australia, can generate 300MW but only for 1.5 hours.

What are the pros and cons of Hydostor’s system? The main advantage is its use of commonly available, proven parts. There is therefore no technology risk and it can have a life of at least fifty years. The cost of the New South Wales project is expected to be A$560 million with the vast majority spent locally, in contrast to many storage techniques that require special imported technology. Running costs are not quoted, but the California projects are expected to require 25-40 employees to run and maintain, a considerable expenditure. It is difficult at this stage to estimate the overall levelized cost of storage.

Hydrostor is a private company, founded in 2010, and supported by the so-called unreasonable collective, a venture capitalist. It is not, apparently, looking publicly for investors. It sees itself as an alternative to pumped hydro storage in that it provides low cost, long life and long storage time but can be sited much more flexibly and without the environmental impact. We can only wait and see whether this is true.