Irish waste-to-energy expert EQTEC continues to build up its project base, recently adding new production sites to its expanding portfolio. The company is focused on producing synthetic gas, or syngas, from various waste using its own patented methods. Syngas is used like natural gas to produce heat or electricity.

Its latest acquisition is a 1.2 MWe gasification plant in Belišće, eastern Croatia, via a joint venture, Synergy Projects, which groups it with a local partner, Sense ESCO. Originally commissioned in 2016, the Croatian plant was built around EQTEC’s proprietary and patented Advanced Gasification Technology (AGT).

It will now be recommissioned and repowered to convert forestry wood waste from local farms and forests into green electricity and heat for use among the local community. Once operational, it will become the second of EQTEC’s so-called Market Development Centres, or MDCs — essentially showcases for its technology in a fully operational, commercial setting. 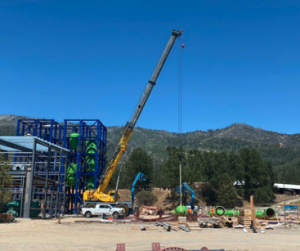 A forestry waste plant under construction in California (www.eqtecplc.com)

EQTEC will also become the site’s O&M contractor, it announced in an update to shareholders on 11 August 2021. The company’s chief executive, said the plant “is the next of several EU waste-to-value facilities we are developing to integrate our leading-edge technology and overseeing through commissioning into live operations.”

Its first MDC was unveiled earlier this summer — the 1MWe EQTEC Italia plant in Tuscany, which is also to be updated, recommissioned and re-powered for operations by Q2 2022. This plant, which also featured EQTEC’s AGT technology when it was commissioned in 2015, will process around 7,000 metric tonnes of locally sourced waste biomass per year.

Initially, this will be a mix of straw and forestry wood waste but it will be upgraded to process a greater diversity of biomass feedstocks over time. It is expected that the company will earn technology sales of €1,750,000 as well as the recurring revenue and profits from the plant, once operational. Investors reacted favourably to the latest news in Croatia with share prices drifting gently upwards, though values remain mostly down on the highs seen earlier in the year.

EQTEC is listed on London’s AIM market and has the Green Economy Mark, which recognises listed companies with 50% or more of revenues from environmental or green solutions. Headquartered in Cork, it now boasts a swelling portfolio of projects at various stages that span both sides of the Atlantic and beyond.

The first of three planned batches of EQTEC equipment has now been delivered to the site. In the USA, construction at the North Fork Community Power forestry waste project in California is also moving forward with the installation of a gasification reactor and associated equipment, inside the primary steel structures.

A key test will be the Billingham project in the UK, which likewise continues to edge forward, but presents a leap up in scale. It will eventually convert 200,000 tonnes of non-recyclable household and commercial waste each year into 25MW of green electricity and 34MW of heat production.

Detailed design for the core gasification process and equipment and a concept design for the full plant have been produced, with the project team now selecting delivery partners, including tier 1 EPC companies. But as GreenBarrel noted earlier in the year, waste-to-energy projects can be slow to mature.

So, it’s encouraging to see some momentum on the ground with a swathe of ventures now either under development or in construction. In a Q2 trading update, EQTEC announced that its revenue projections for the year were on track — approximately €15 million for the financial year ending 31 December 2021.

In May, it successfully raised £16 million in an oversubscribed offer aimed at accelerating growth, which hints at positive sentiment overall towards its business strategy. There’s a track record to back it up too, with the company’s first commercial-scale plant, its 6 MWe plant for Movialsa in Spain, commissioned a decade ago, in 2011.

For the most part, however, share prices remain fairly static, suggesting that a little more patience may yet be required before we see the company realise its full potential. Last evening the £119.81m market cap Eqtec Ltd share price was 1.4p against a 52-week high of 2.77p and a 0.46p low.