If, and it is a big “If”, the whole world suddenly wholeheartedly embraced electric cars, what would be the consequences?

Leaving aside the problems arising from the substantial rising demand for more electricity from renewable sources for charging the cars and the problems caused by the world’s over-reliance on copper and cobalt from the Democratic Republic of Congo (DRC) – scarcely a by-word for Good Governance – there is a further problem in simply finding enough lithium to produce the batteries.

For, if it is correct that an electric car would need four times more lithium than an orthodox car then the scale of the problem becomes apparent (There is a further complication, which is outside the focus of the present article: it seems that the Chinese pose something of a threat to future lithium production). 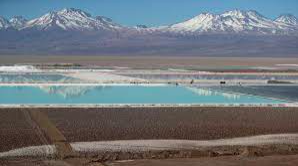 A lithium lake in Chile (www.qz.com)

Recent research has also highlighted concern about the environmental and carbon footprint of current global lithium extraction projects.  As a result, with the move to global decarbonisation and improvements to batteries, demand for the raw materials required for low carbon technologies is increasing sharply, as is the search for geographical diversification.

According to the Annual BP Energy Survey, world production in 2019 was around 77,000 tons, of which more than half (52.9 per cent) came from Australia and a further 21.5 per cent  from Chile, while China was third with a more modest 7.5 thousand tons, or nearly ten per cent of world production.

Lithium deposits can be divided into the more common brine type and the less common pegmatite/ granite/ clay-hosted type. Of these, the brine types are the largest in size, as evidenced by Chile, but the pegmatite/ granite /clay-hosted deposits can be more valuable and easier to mine. The largest producer of lithium from hard rock mining is Australia, and the world’s largest operating lithium mine is in the southwestern corner of Australia.

Since the UK is currently totally reliant on imports of lithium and the other metals needed for batteries, it is perhaps no surprise that the country is now being re-evaluated for its geological potential to provide some, at least, of the materials needed.

One of the companies trying to profit from the situation is Cornish Lithium (CL) which has assembled rights to explore for lithium in brines across some 300km of Cornwall, where the battery metal has been found naturally dissolved in saltwater since 1864. CL is, a private company based at Treleavour, in Cornwall, the centre for British mining for many centuries. (As a reminder of this historic connection, the county still boasts the Camborne School of Mines). Cornwall is rich in granite deposits, from one of which the company has already produced lithium carbonate of “near battery quality”.

That is encouraging, but apparently not enough to ensure profitability, which still seems to be some distance away. However, that is not the whole picture: the good news is that a round of further financing, which was launched in October 2020, raised some £5.2 million in a very short space of time, possibly as little as twenty minutes.