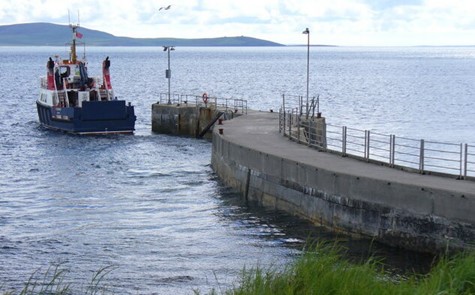 The tough climate of the North Atlantic is an ideal proving ground for Orkney’s renewable energy boom.

This article first appeared on the www.climatenewsnetwork.net

A surplus of electricity from renewable sources is a luxury that many communities in a world threatened by climate change might wish for. This is the happy situation of Orkney, a wind-swept archipelago 10 miles (16 kms) north of the Scottish mainland on the edge of the Atlantic. Orkney’s renewable energy, a success at home, may soon be supplying consumers further afield.

Using a combination of wind, sun, tides and waves, the islands have been producing more than 100% of the electricity the residents need since 2013, and have now reached 130%.

The islanders are exploiting their renewable riches by developing a variety of pioneering schemes. Many are being installed by Scottish engineering companies that hope they will be scaled up and will benefit the rest of Europe, and of the entire world.

Orkney is home to the European Marine Energy Centre, which is successfully testing wave and tidal machines. But the islands are also pioneering other technologies and putting the surplus electricity to good use.

Spare power is already used to make hydrogen and oxygen. The Orcadians plan to use hydrogen to power the fleet of small boats they need to connect the populations of nine of the largest inhabited islands, and the fleet of larger ferries linking them to mainland Scotland.

“Where you have a coastline and some waves, there is an opportunity”

The 22,000 people of the islands have enthusiastically embraced renewable energy, with more than 1,000 households generating their own power, covering over 10% of the population. There is also a high take-up of electric vehicles – 267 at the last count.

The Orkney Islands Council is pushing for an interconnector linking Orkney and the mainland to export its surplus energy, which a recent report suggests could be worth up to £807 million (€938m) annually to the local economy.

This would mean building more wind turbines in the outlying islands, and also connecting tidal and wave energy installations to the grid.

The Orkney Renewable Energy Forum promotes all forms of renewables on the islands and details more than a dozen pioneering projects that have come to Orkney for testing.

Because of the frequently stormy weather and exposure to the Atlantic rollers, Orkney has been attractive for companies needing especially to test novel wave power machines and undersea turbine installations. The sheer number of experiments allows Orkney to claim to be a world leader in the field.

Underwater turbines, known also as tidal stream turbines, were first tried in the islands. They exploit strong undersea currents and are now a proven technology. MeyGen began by successfully installing four 1.5 megawatt turbines between Orkney and the mainland. They performed better than expected, and a much larger development is now under way.

Although the United Kingdom has now left the European Union, the tidal technology developed in Orkney and Shetland – the island group to the north – is destined for wider European use. The EU has ambitious targets for generating tidal energy and companies are racing to exploit the many undersea tidal resources along the Atlantic and North Sea coastlines.

They believe that costs will fall as the technology develops, and predictable tidal currents will produce the regular output highly desirable for keeping electricity grids stable.

Wave machines, however, have not been so successful. Although some have clearly worked and produced power, the last push to full commercial deployment has proved difficult, and some companies have gone bankrupt.

Engineers have not given up, however, and the latest wave machine, 20 metres long and weighing 38 tonnes, has been towed to the islands and is currently being installed before tests start.

There are ambitious plans to connect it to the grid to prove that the technology lives up the maker’s claims that hundreds of such machines could power millions of homes.

Cameron McNatt of Mocean Energy, which is developing the machine, has high hopes for Orkney’s renewable energy. He said: “Scotland and the North Sea are really good proving grounds for this technology, and where you have a coastline and some waves, there is an opportunity.

“We anticipate our technology being used all over the world. Outside of Europe, the United States is a big target market for us, as is Australia and the Oceania region.” − Climate News Network