The accepted conventional wisdom in the UK for the past three decades at least, has been that renewable energy companies have been infant groups that have needed subsidies and what is known as “project finance” to establish that they are bona fide, before private sector investors would come in to do wonders for their share prices.

For some groups the idea has not worked and they have gone bust. Others, like SIMEC Atlantis Energy has, until now, fared better. When the British government-organised subsidy for the small Atlantis group seemed to be drying up, a large private concern, with deep pockets, stepped in.

Atlantis Energy was founded more than a decade ago. It has been quoted on London’s AIM for over three years. Its core business was to develop, finance, construct and operate large scale renewable energy projects in North America, Europe, Asia and emerging markets. It claimed it had 1000MW (megawatts) of power projects in various stages of development.

Its flagship asset has been the MeyGen project in the Pentland Firth offshore, Scotland, which it said was the world’s largest tidal stream array. When we wrote about Atlantis in November 2017 the so-called 6MW capacity pilot of MeyGen was just coming into production, with the claim that there was 392MW of further development capacity from the seabed lease possible. The existing array subsequently exported over 8GWh (gigawatt hours) of energy to the national grid from its four turbines by the end of July 2018.

MeyGen IA, as the 6MW pilot was called, had been funded by the EU and Scotland’s  Renewable Energy Investment Fund (REIF). Some of the EU’s support of Euros 20.3million (£17m was used, with the rest in the kitty for expansion. Buoyed by this, the company’s management started to think that it could move quickly to realise the full 392MW potential of the Pentland Firth. 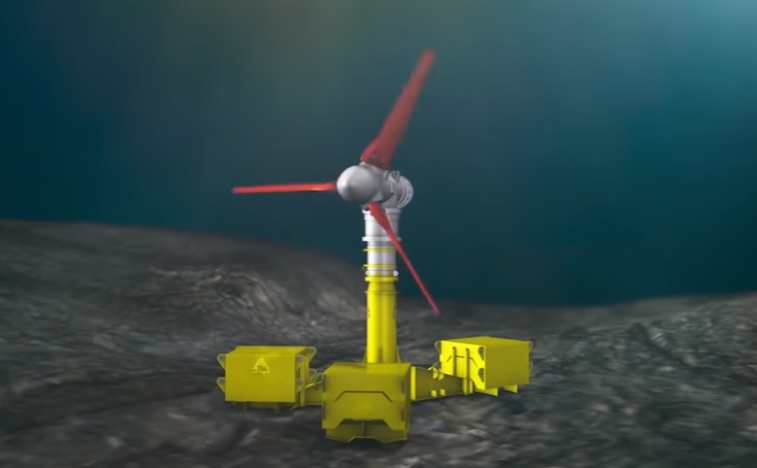 A marine current turbine in the Pentland Firth offshore Scotland

This would require big money, much bigger than Atlantis’s EU donated war-chest held. Nevertheless, Atlantis went for it and applied to the Department for Business, Energy and Industrial Strategy (BEIS), for a Contract for Difference (CfD).

This is the instrument the BEIS uses to support. less established renewable technologies and is ultimately paid for by the consumers.  At one CfD auction there was great surprise when a company was awarded a CfDs for £57.5 per MWh for an offshore wind farm.

Atlantis’s application for a CfD was £300 per MWh and, not surprisingly, was unsuccessful. Having been rebuffed in this way Atlantis looked around for ways to diversify. In May 2018 the board of Atlantis approved the acquisition of SIMEC Uskmouth Power (SUP), a 220MW power plant in Wales, from SIMEC Energy.  As part of the deal SIMEC Energy, a division of GFG Alliance, would become the largest shareholder in the company and its name was to change to SIMEC Atlantis Energy (SAE).

GFG Alliance is a London headquartered international conglomerate. It combines energy generation, metal manufacturing and financial services. It has total revenues of US$13 billion a year and net assets of around US$3.1bn, the company is owned by the Gupta family.

SAE’s plan is to convert the power plant to a facility that uses end-of-waste pellets instead of coal at a cost of £200m. The energy pellets are to be derived from a mixture of biogenic material and plastics that cannot be recycled and are typically sent to landfill.

The interim results for the six months ended 30 June 2018 said: “The company is on track to have first power generation from the converted plant in in 2020 which will immediately deliver meaningful operational cashflows”.

.Macquarie Research in a broker’s note in July 2018, commenting on SAE and the SUP takeover forecast the plant would  generate an EBITDA (earnings before taxation, depreciation and amortisation) of £51m in its first full year of operation in 2021. And, on this basis Macquarie broker valued it at 42 pence a share, or £152m, based on a a discount rate 13 per cent. This made up the bulk of its target price which was set at 55p a share.