Like so many of the other big oil companies, including BP, Shell started the year in reasonable shape, with the share price at 2,290.50. As the various crises (not just the corona virus) hit the world of oil, Shell’s share price, like that of the other oil majors, followed the oil price up and down, mostly down. The share price is now 965.40, reflecting a Brent oil price of $37.65 a barrel and the implications of Covid 19.

But in a sense, Covid is just the latest problem to take into account. Thinking back, it is five years since the Paris Agreement to limit the world-wide increase in emissions to less than two per cent. Climate Change now ought to be firmly on the agenda and serious expenditure to have happened, or at least be committed. But collectively, the oil industry has not spent nearly enough to make the goals of Climate Change a reality. To mix metaphors, they may talk the talk, but they have so far failed to put their money where their mouth is.

A good example would be Shell, whose relatively ambitious green energy plans have led to the company being considered as a climate leader in the oil industry. In 2016, the Anglo-Dutchcompany established a “New Energies” division with a remit to invest $1 billion a year for the next four years in clean energy projects, including biofuels, hydrogen and electricity. In 2017, this target was raised to between $4bn and $6bn, still by the end of 2020. In terms of my mortgage, that is a huge amount. But it is not so much by comparison with the estimated $120 billion which Shell spent on fossil-fuel projects in the same four-year period. One estimate is that Europe’s five largest oil companies – Shell, BP, Total, Eni and Equinor – together spent no more than $5.5bn on renewable energy projects to date, compared with a combined total budget of almost $90bn in 2019 alone. 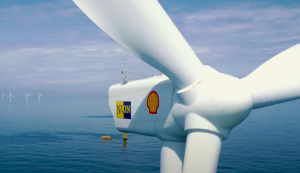 Shell has announced that it will be carbon neutral by 2050, the second European Super-major after BP to do so. If “carbon-neutral” means a low-carbon energy and electricity generation business, which is what the company says it means, do their actions give enough support to their words? Take wind power: the web-site of the Anglo-Dutch company gives details of investment in four on-shore wind farms in the States, which already provide electricity for slightly less than 100,000 American households. Fine, but the total capacity of the four farms is less than 1GW; the total world-wide installed capacity of on-shore farms is over 650 GigaWatts and the population of the US is about 280 million.

The web-site also talks about the niche off-shore wind sector which is now rapidly expanding. (“Niche” because installed capacity world-wide is only 29 GW, but over 10 GW came on line in the last two years.) Shell is involved in three Dutch farms, two still at the project stage, and a further two projects in the US. Even once they come on line, the Shell investments will still look inadequate by comparison with world-wide efforts. It is not that these are not decent projects, just that they are not numerous enough and not large enough.

One final thought: what special expertise do the oil companies bring to the renewables game as a whole, apart from money? Shell plans to become the world’s biggest electricity company by the 2030s. That undoubtedly lies behind the current campaign to change the company profile from “oil” to “energy”. For oil and renewables do not necessarily mix.