Cool your home, save money, chill the atmosphere 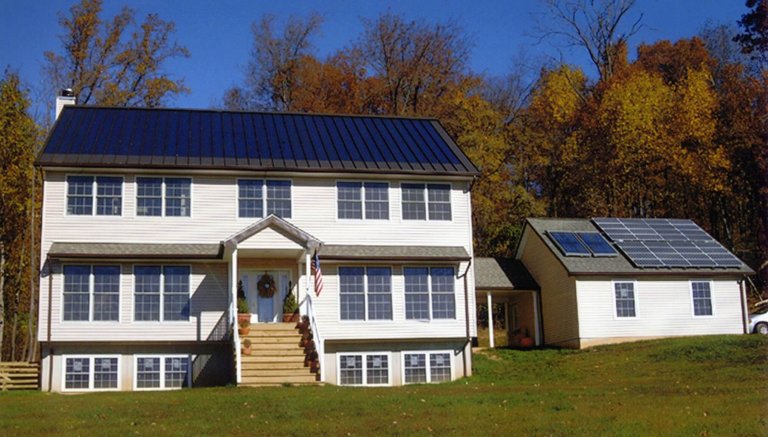 This US zero energy house can run for at least 24 hours on the electricity it generates. Image: US Dept of Energy (public domain), via Wikimedia Commons

Feeling too hot? Then turn the thermostat down and cool your home − a good start to cooling the planet.

Rescuing battered economies in the wake of the coronavirus onslaught often demands building anew, but it doesn’t have to mean altogether different ways of life, transformed industries and modern buildings: just cool your home for a start, because new ways to heat our houses could save money, improve health − and help the planet by cutting greenhouse gas emissions.

Housing, at least in temperate northern countries, could provide much better living conditions while doing much less environmental damage. A new approach in the Netherlands, known in Dutch as Energiesprong, is one answer.

It can cut the fossil fuel used for heating (or cooling) a house, offering occupants affordable, comfortable lives and helping to solve an urgent problem. And it can do it all in days, a fraction of the time energy retrofits usually need.

The Rapid Transition Alliance (RTA) is a UK-based group which argues that humankind must undertake “widespread behaviour change to sustainable lifestyles … to live within planetary ecological boundaries and to limit global warming to below 1.5°C” (the more stringent limit set by the 2015 Paris Agreement on climate change). It thinks the built environment looks set for a long-overdue makeover.

Energiesprong involves some basic rethinking, about how much comfort we need. In 1970 the Danish scientist Povl Ole Fanger published his research on how warm people like to feel. His work still influences the designed-in temperature of modern buildings and their energy use.

So, despite all of us having different metabolisms and body shapes and sizes, we usually work seated in a space heated or cooled to 21-22℃. Engineers and architects also factor in assumptions about what the supposedly typical occupant will be wearing: a man’s business suit  (trousers, a jacket and a long-sleeved shirt).

Fanger’s equation therefore locks in assumptions that apply only to a male, suited minority, ignoring more than half of humanity: women, people who don’t wear suits, those with different metabolisms. It also locks in a level of the carbon emissions which stoke the climate emergency.

A reduction from 20°C to 18°C across the British housing stock would save the equivalent of 33 TWh of electricity − about two thirds of Portugal’s domestic electricity consumption in 2019 of 48 TWh.

Day-to-day energy use currently accounts for about 28% of global emissions annually. A massive increase in the rate of existing building energy efficiency is needed to meet the emissions reduction targets set by the Paris Agreement. But building renovations currently affect only 0.5-1% of the existing UK building stock each year.

Governments are variously funding schemes to insulate inefficient old buildings and to remove polluting systems such as gas boilers in favour of renewables. All these efforts are chasing the target of “net zero” carbon emissions and beyond to “negative” emissions, resulting in an overall reduction.

For most older houses especially, this can prove costly, disruptive and time-consuming; without government assistance or incentives, few people are willing or able to undertake the challenge. Even in countries claiming to be climate leaders, like the UK, progress has been slow.

Energiesprong offers integrated refurbishment, regulatory change and financing. Its retrofits leave net zero energy buildings, generating all the energy they need for heating, hot water and electrical appliances by using new technologies such as prefabricated facades, insulated rooftops with solar panels, smart heating, and ventilation and cooling installations. A complete home makeover can be finished in less than 10 days, and some have been done in as little as a single day.

It’s an approach that could become much more widespread, and experts say it needs to be. It has to be set against the predicted doubling in global building space by 2060, when two thirds of the expected global population of 10 billion people will live in cities.

That will need the equivalent of an entire New York City to be added to the global built environment every month for the next 40 years. The energy used simply to construct buildings before they are used constitutes an additional 11% of global emissions today.

The budget for an Energiesprong renovation or new build is reckoned as future energy cost savings plus the cost of planned maintenance and repairs over the next 30 years. To meet the goals of the Paris Agreement,  the built environment’s energy intensity − how much energy a building uses − will have to improve by 30% by 2030.

Globally, the energy intensity of the building sector is improving by about 1.5% annually, but this is more than offset by the number of new buildings. Global floor area is growing by about 2.3% annually, and carbon emissions related to buildings are expected to double by 2050 on present trends.

Making houses less energy-hungry also improves social justice. Most of the UK’s housing – and particularly rental properties and those in poorer areas – are leaky and cold, and often damp. Many people simply can’t afford to heat them, which can put a decision to cool your home in a different perspective.

A 2018 briefing paper by researchers from two UK groups, E3G and National Energy Action, said the UK had the sixth highest long-term rate of excess winter mortality out of 30 European countries, with 9,700 deaths attributable that winter to the avoidable circumstances of living in a cold home. Another estimate puts the 2018 figure at 17,000.

As well as the Netherlands, there are Energiesprong initiatives in the UK, France, Germany and Italy. In the US, groups inspired by Energiesprong are working on local solutions in New York state and California. − Climate News Network