One of the Renewables’ success stories is undoubtedly off-shore wind, on which the Global Wind Energy Council (GWEC), has just issued an interesting report. This shows that off-shore wind has grown from 1 per cent of global wind installation by capacity ten years ago (2009) to 10 per cent last year (2019). GWEC’s Dutton notes that measured in investment terms, the figure is much greater, adding that fundamentals for the future are promising; more than 70 per cent of the planet is covered with sea and wind speeds off-shore are considerably stronger than on-shore.

Perhaps of most interest to the policy makers is an optimistic GWEC prediction that the off-shore wind industry could  create some 900,000 “green” jobs over the next five years if all the anticipated  global installations of off-shore wind capacity go ahead. GWEC also argues that $1million spent on clean energy engineering produces twice as many jobs worldwide as the same amount of money spent on projects involving hydrocarbons. And, in decarbonisation  terms, 1 GW of offshore wind power avoids more than 3.5 MT CO2. It has more potential for carbon avoidance than even onshore wind, solar, hydro or efficient gas power.

It is common knowledge that wind turbines are getting steadily larger. The increase in offshore wind turbine size has been driven primarily by the goal of reducing the unit cost of wind energy. When the bigger offshore turbine is released with a higher nameplate capacity, rotor diameter and tower height, the technical capacity factors are higher, which in turn increases the annual energy production (AEP). But although larger turbines per unit are more costly than smaller ones, there are savings in CAPEX for foundations, cables and installation as well as the OPEX due to fewer turbine units. 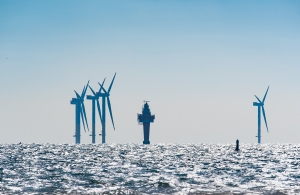 Image by doskey12 from Pixabay

But perhaps it is a little less well-known that there has also been a big advance in new technologies for off-shore wind like floating foundations. From an engineering perspective, these advances will enable installation in deeper waters than were previously considered and build on the considerable experience of the oil and gas industry in semi-submersibles. (One hope is that re-skilling offshore oil and gas workers for the growing wind sector will become a priority. This will encourage low-carbon economic growth and competitivity, which should be of particular interest to coastal communities in close proximity to projects.)  In addition, reskilling could help respond to labour market disruptions from the energy transition and the COVID pandemic.

The GWEC prediction is that floating technology will sail through the current demonstration and trial stage in the first half of the decade to achieve proper commercialisation by 2030.

With 6.1 GW of new capacity added, 2019 was the best year in history for the global offshore wind industry. While China installed the most off-shore capacity last year (2.4 GW), followed by the UK (1.8GW), the UK still has more installed capacity than China, or any other country in the world. At the moment 75 per cent of all installed off-shore wind capacity is in Furope.  But the future is predicted to be Asian. Apart from China, it would be fair to say that the Asian market is “in the early stage of development”, with Japan, South Korea and Vietnam all showing promise. China, by contrast, seems well set. Ambitious targets have been set by the Chinese coastal provinces. Guangdong for example has plans to build 30 GW of offshore wind power by 2030. That is slightly greater than the total of all the installed off-shore wind in the world at the end of 2019 (29.6 GW).