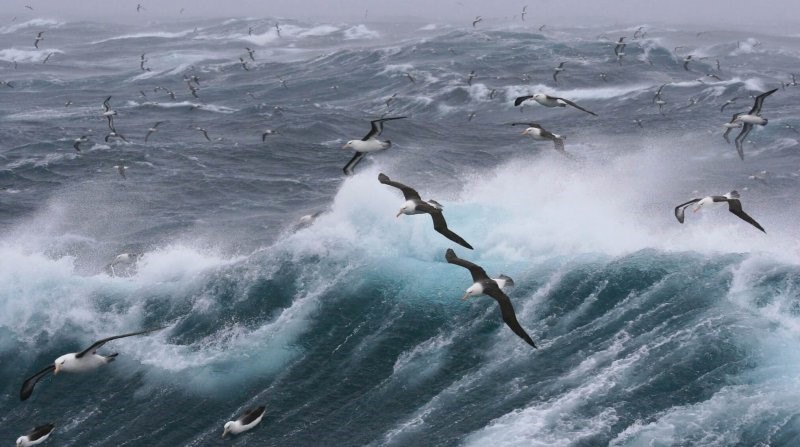 A wandering albatross has an average wingspan of over three metres. Image: By Fer Nando on Unsplash

From the deep Mediterranean marine mud to the desolate beaches of the Southern Ocean, plastic waste now gets everywhere.

The throwaway society now has a global reach. British and German scientists have found astonishing concentrations of plastic waste in the form of tiny fibres on the sea floor. In just one square metre of marine ooze, they have counted as many as 1.9 million fragments less than a millimetre in length.

And two studies have identified sickening levels of plastic waste in the Southern Ocean that washes around Antarctica. One team reports ever greater counts of debris on the beaches of islands in South Georgia and South Orkney; the other on the increasing quantities ingested by the wandering albatross and the giant petrel, two iconic birds of the south polar seas.

An estimated 10 million tonnes of discarded food wrapping, drinking straws, disposable cups, bottles, carrier bags and fishing gear are tipped into the sea each year: plastic waste has now been found in all the world’s oceans, and even in the polar ice, an indestructible reminder of human impact on the natural world.

Tiny textile particles or microfibres of plastic have been found in every sampled litre of sea water, in the stomachs of seabirds and in the bellies of whales.

In fact the visible debris – the polystyrene cups and drinking straws and carrier bags floating on or near the surface – is thought to account for a tiny proportion of the total. Around 99% is thought to be in the deep oceans.

“Microplastics are not uniformly distributed across the study area; instead they are distributed by powerful seafloor currents that concentrate them in certain areas”

And researchers now report in the journal Science that they have found an indicator as to the final fate of most of it. They collected sediment at depths of up to 900 metres from the floor of the Tyrrhenian Sea to the west of the Italian peninsula and began counting the particles of indestructible polymer material in the marine mud, carried there by deep ocean currents.

“Almost everybody has heard of the infamous ‘garbage patches’ of floating plastic, but we were shocked at the high concentrations of microplastics we found on the sea floor,” said Ian Kane of the University of Manchester, in the UK, one of the authors.

“We discovered that microplastics are not uniformly distributed across the study area; instead they are distributed by powerful seafloor currents that concentrate them in certain areas.”

These same deep currents also carry oxygen-rich water and nutrients, which suggests that toxic microplastics are being carried into vital deep ecosystems. But the surface-borne debris has far-reaching consequences too.

British and Australian scientists who made surveys over three decades of beached plastic, metal, glass, paper and rubber at locations in the Southern Ocean report in the journal Environment International that between 1989 and March 2019, they recovered 10,112 items of waste weighing in total more than 100kg from Bird Island off South Georgia, and 1,304 items weighing in all 268 kg from the remote shores of Signy Island in the South Orkney archipelago.

Almost 90% of the total was plastic. The peak of the debris count was in the 1990s, which suggests that some attempts have been made to reduce the levels discarded from shipping and other sources.

And a second study in the same journal reports that in the same 30 years, levels of plastic pollution had been consumed in increasing quantities by two out of three species of albatross, and another sea bird.

Annual intake in Diomedea exulans, the wandering albatross, had increased 14-fold, and in the giant petrel Macronectes giganteus the intake had increased six-fold.

“Our study adds to the growing body of evidence that fishing and other vessels make a major contribution to plastic pollution,” said Richard Phillips of the British Antarctic Survey. “It’s clear that marine plastics are a threat to seabirds and other wildlife, and more needs to be done.” – Climate News Network