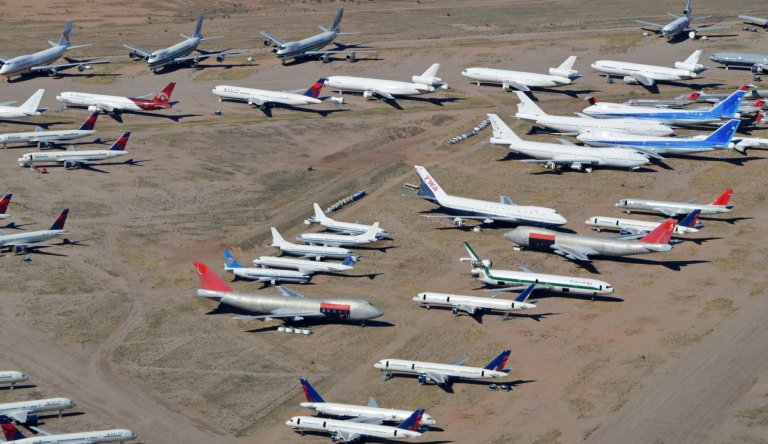 Too few passengers, too many aircraft: End of the flight in Arizona. Image: By AlanWilson, via Wikimedia Commons

In the midst of the coronavirus epidemic, Covid-19’s viral lessons offer a warning of what may lie ahead.

There are some glimmers of hope discernible in the loss, confusion and misery that’s spreading worldwide, and one is that Covid-19’s viral lessons could help to equip us all to tackle the climate crisis that’s remorselessly building up.

A major side effect of the battle against the spread of the corona virus, for example, has been a significant reduction in the amount of climate-changing greenhouse gas being pumped into the atmosphere.

Power plants and factories in China and elsewhere have been shut down: the use of fossil fuels, particularly oil, has plummeted.

As a result of this reduced pollution, millions of people in cities and regions across the world are breathing fresher, cleaner air.

The epidemic has had other environmental consequences: residents of Venice in northern Italy say they have never seen such clear water in the city’s canals, mainly due to the dramatic drop in tourist numbers.

With several countries in lockdown, car and truck traffic no longer clogs up the roads and motorways.

“Covid 19 is a test of how the world copes with crisis. Climate change will present a much greater challenge”

Starved of passengers, many airlines have grounded planes. One of the big problems facing oil companies now is what to do with vast amounts of unsold jet fuel: some are resorting to storing it in tankers at sea.

Of course, whenever the virus is finally banished, industrial production could be ramped up again and fossil fuel emissions return to former levels.

But maybe, just maybe, some lessons are being learned as a result of the epidemic. One is obvious – that we are all in this together.

Covid-19, like climate change, knows no boundaries, respects no borders. It has become clear that nations cannot retreat to their bunkers and fight the virus alone. As with the battle against climate change, international action and cooperation are vital.

Another lesson is that science – painstaking analysis and the collection of data, both locally and at an international level – is essential if Covid-19 and other associated epidemics that might arise in the future are to be defeated.

Epidemiologists have constantly warned of the likelihood of the worldwide spread of a virus, saying it is not a case of if, but when. For the most part, they have been ignored.

In the same way, climate scientists have been warning for decades of the catastrophe threatened by global heating. Covid-19 shows how vital it is to listen to the science. Perhaps the epidemic will prompt a more urgent approach to climate change.

Covid-19 also reinforces the difficult-to-get-hold-of concept that nothing is normal any more. Suddenly the world has been turned into a very uncertain place. Behaviour which many of us have taken for granted, such as international travel, is, for now at least, no longer acceptable, or good for our health.

Scientists say climate change will mean even greater and more sustained adjustments to our lives. Rising seas will result in the displacement of millions of coastal dwellers. Floods and droughts will cause agricultural havoc and severe food shortages. People will have to adjust to a new – and constantly changing – reality.

Leadership and a clarity of policy – again, both at a national and international level – have been shown to be essential in fighting the coronavirus. After initial failings, China and South Korea moved to impose a strict and comprehensive regime to control the epidemic.

Specialists in those and several other countries have shared their experience and data with other nations.

Unfortunately, others − in particular Donald Trump in the US and Jair Bolsonaro in Brazil − have not acted in the same way, or shown a willingness to take strong, decisive action.

In the US, President Trump has in the past dismissed global warming as a hoax and withdrawn the US from the Paris Agreement on climate change. At the start of the Covid-19 outbreak, the virus was dismissed by the White House in similar terms.

Though Trump has since adjusted his message, valuable time has been lost. As the infection rate and death toll rise, the World Health Organisation is warning that the US is now in danger of becoming the world epicentre of Covid-19.

In Brazil, Bolsonaro – he refuses to believe in climate change − describes Covid-19 as a fantasy, suggesting it’s all a plot by China to weaken the country’s economy. Opposition to Bolsonaro’s lack of action on the pandemic is growing.

Covid 19 is a test of how the world – and its leaders – copes with crisis. Climate change, rapidly galloping down the tracks, will present a much greater challenge. − Climate News network